For my first installment of my list of things that don’t suck, I give you one of the funniest movies you’ve never seen…The Final Sacrifice. 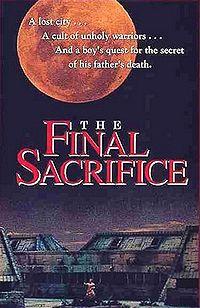 I do need to specify though that the only way this movie actually meets criteria of a comedy is if you watch the MST3K (aka Mystery Science Theater 3000) version. Otherwise…actually skip the otherwise, and believe me when I tell you that you should never, ever watch this film without the help of MST3K…EVER!

Note: To those of you who have seen this film, please go out today and share it with a friend.

For those that don’t know about MST3K it was a television show about a man who was stuck in space on a satellite with some robot sidekicks. The man and two of his robots were forced to watch bad movies while an evil scientist and his henchman(men) would observe them, and that was essentially the show. I would spend two hours watching a silhouette of a man and two robots in a movie theater watching and making fun of really bad movies and for me The Final Sacrifice was one of the most brilliant episodes they ever made.

The Final Sacrifice is Canadian, which definitely sets a mood for the entire film. Now what that mood exactly is, I’m still not sure. I have yet to figure it out, but I do keep trying. To date I’ve probably watched the film around thirty to forty times and as far as I can figure, the mood of the film is kind of a cross between Shatner performing Rocket Man and a hockey hair Barbara Mandrell giving Bigfoot a pedicure.
The first hurdle of the film is trying to distinguish who the hero actually is. For the first thirty or so minutes you are pretty sure that the hero is an egg noodle of a boy named Troy. The problem with this is, case and point…

This is Troy.
Now even though Troy does pull off some pretty amazing feats, such as outrunning a Ford Torino full of evil cult members while on a 10 speed. You will spend the first portion of the film wanting, actually pleading to the film to give you a different hero. The film actually does its best to comply, but once again the film was made in Canada, so it’s really not an up trade, and that is how we end up with is Rowsdower…Zap Rowsdower.

One amazing feat accomplished in the MST version is that we do get to hear the name Rowsdower, or close variations of it, said approximately 54 times. Even more impressive is that you find yourself giggling every time you hear it.

Then we have our villain, who is lovingly referred by the MST crew as “Canadian Villain Garth Vader” but is called Satoris. Is he a super villain? Hmmm, I’ll put it to you this way, he does get a hair cut between his first scene in the movie and his remaining scenes, and he does have some first rate nostril flaring scenes that would rival even the great Judd Nelson. So, I guess, yeah he’s sort of a super villain. Well he’s a Canadian super villain at any rate.

Let me know what you thought of the film. Seriously though, it’s brilliant. Oh, and your welcome for telling you about this.