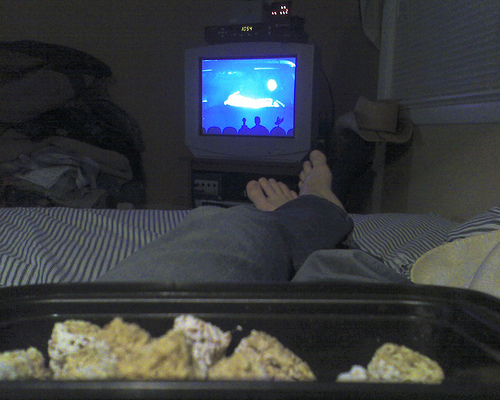 MST is one of those symbols of permeating happiness for me. I can watch episodes by myself or with friends and quote along in giggly goodness, or I can have an episode playing in the background, like right now, while I work on my writing, or even while playing the occasional game.

As background noise, I love it. I don’t have to pay attention at all, but every now and again something will sneak through and I’ll start smiling or laughing. Even if I can barely hear it, I can look up from what I’m doing and if I know the episode really well, I’ll start chucking to myself because I know what riffs are coming up next, and I know they are going to make be laugh. They always do.

One of my favorite things to do is take a nap on the couch with an MST playing on the television. The collection of riff after riff is a lullaby of humor. I fall asleep and wake up smiling, and on more than one occasion I’ve even waken up laughing. It’s the perfect ingredient to the perfect nap. 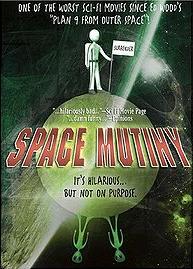 Which finally brings me to today’s MST feature, Space Mutiny. I believe the cover of the 2008 DVD release describes this film best by stating, “It’s hilarious, but not on purpose.” Which is true, unless you are watching the MST version, then it’s most definitely on purpose. My main reason for highlighting this film is because it has been my giggle to sleep companion the past few times I have taken a nap.

When describing this film, I think it’s important to point out that all of the space scenes are taken from the original TV series of Battlestar Galactica. The only thing I could think of that makes sense for why this was done is that the director won some Battlestar Galactica stock footage in a poker game and decided to make a film around it.

The inconsistencies throughout this film are simply astounding, and is probably the only consistent thing about the film. I think Mike sums it up perfectly during the opening credits. As the Edited By credit appears, three names appear below it, and Mike quips, “Passed from editor to editor in a desperate attempt to save it.” And you know what, each one consistently failed.

One of my favorite moments in the film happens when one of the ships crew members, not wearing red I might add, gets killed by the films evil villain and then in the very next scene the dead crew member is sitting at her work station on the bridge of the ship. They even walk past her a second time letting her fill the foreground of the shot. Apparently it wasn’t enough that she appeared once in the scene so the few people still paying attention while watching the movie might notice, oh no, they just had to show her a second time just so the people that did catch it the first time could prove it to everyone else who missed it. It’s always nice when a movie gives you a freebee like that, so you tell your friends, “See! I told you!”

The hero of the movie, Slab Bulkhead, no wait, it was Fridge Largemeat, no, no, I think it was Punt Speedchunk… bah, I have no idea. Oh wait, that’s right it’s David Ryder. He’s a big beefy guy who screams like a little girl constantly throughout the film. Personally I think this makes him an anti-hero, but considering the lack of hero options, you’re pretty much stuck with him. This brings me to my favorite part of this film… Mike and the bots endless barrage of nicknames they give to our hero throughout the film. Here are a few of my favorites:

If you are a fan of the show and have not yet seen this one yet, or if you’ve never watched an MST before, this one is worth the effort. Don’t get me wrong, it is a bad movie, and sometimes its worse than bad, but it is worth it. Here, I’ll even make it easy for you to find:

I think one of the best things about watching an MST’d movies is that no matter how bad the movie is, you truly feel a sense of accomplishment at the end. Not only did you make it though a film that even a mime would give the finger to and personally call the director to tell them what a piece of shit it was, while still wearing their mime garb, but you finish the picture smiling, sometimes laughing. There’s also a good chance you will actually tell your friends that the cinematic abomination you just watched really wasn’t that bad… I mean it’s bad, you don’t lose all common sense, it just that it’s not THAT bad. Call it what you want, but be being able to do that to an unwatchable movie is nothing less than miraculous.

What are some of the movies that you think should be made fun of? Do you think we should start a petition to get the MST crew sainted… saintified… sainthooded? That thing that old people in funny hats do to people who do miracles? It’s a thought anyway.