The Box – A Smirk Movie Review

by Richard Timothy | Oct 29, 2009 | Fiction, Made-up Movie Reviews, Something I Know Nothing About | 0 comments 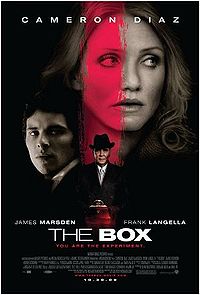 That being said, I give you The Box. Not to be confused with “a box” but it is, in fact, THE BOX. The main difference being that Cameron Diaz is in some way connected to one, and not the other. And as a general rule of thumb if someone gives you a box with a Cameron Diaz in it, you give that thing right back. Trust me. You do not want that type of responsibility.

The Box is both a sad and depressing, yet light hearted and comical tale about a banshee with laryngitis. After centuries of screaming, Frank (James Marsden) loses his voice, resulting in the complete and total loss of his vitality and purpose as a banshee. Frank is put on mandatory leave until his voice returns.

Having no real home, because his work has kept him on the road his entire un-life, Frank ends up taking residency in a large empty box in the back yard of an old man named Bruce Campbell (Frank Langella), who is disfigured, and suffering from the early stages of Alzheimer’s disease.

Bruce decides to start smoking pot in hopes that it will help him forget that he is starting to forget, and hopefully forget what it is that he has forgotten. Not wanting to smoke in his house, Bruce decides to make the box his official smoking den.

We learn that the box was built as a fort by neighborhood kids who had long since grown up and moved away. Most of the old decorations had been removed from the box except for one, which was a picture torn from a magazine and tacked to one of the walls. It was a picture of Cameron Diaz.

Frank keeps himself hidden from Bruce for the first two visits to the box, but on the third visit, there is a chemical reaction between the exhaled smoke and Frank’s ethereal form. This causes Frank to appear to Bruce and to experience the effects of the marijuana. Soon the two become good friends, even though Frank still can’t talk. Also, the chemical reaction between the ethereal form and the pot causes the Cameron Diaz picture to come to life and have conversations with Bruce.

Fortunately, the film makers were wise enough to use Rachel Weisz as the voice over for Diaz. Additionally, you only see Cameron from the neck up in all of her scenes. Because of the lack of screen time and the fact we do not hear her real voice once throughout the entire film, it is my opinion that this is the greatest and most watchable Cameron Diaz movie ever made… so far.

Many wacky adventures ensue and the film wraps up with Frank getting his voice back. At Bruce’s request Frank does his patented banshee scream. The effect causes Bruce’s heart to stop mid puff. Smoldering ashes call to the floor and catch fire to the box. The Cameron Diaz photo burns up along with Bruce’s corpse. The shock of losing his first and only real friend removes the screaming desire that make Frank the banshee he once was. Staring at the fire, unsure what his un-life holds for him, Frank feels a hand on his shoulder. It’s Bruce, freshly ghostified and ready to play. The film ends with the two of them heading towards an Ivy League school, inferring that it would make sense that they would have the best pot.

For me this picture can be summed up in the last line of the film. Frank asks Bruce if they should try to save Cameron and bring her with them. To which Bruce replies, “I’d rather chop off my hand and attach a chainsaw to my bloody stump, baby.” Frank nods in agreement and they walk off as the box continues to burn behind them.