by Richard Timothy | Mar 11, 2010 | I Think There's a Point, It Seemed Like a Good Idea at the Time, My List of Things that Don't Suck, Non-Fiction, Observationally Speaking, When I Was a Kid | 1 comment 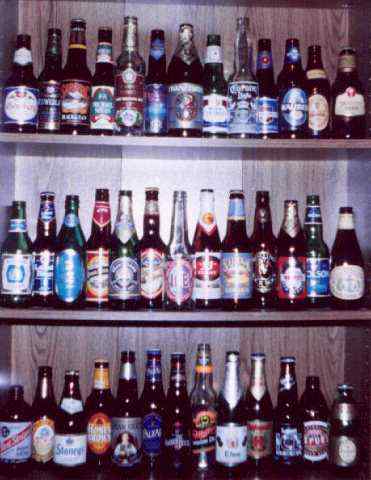 Whenever I begin telling people about my beer journal I get the look. It’s not a standard look, hence why it’s “the look” instead of “a look”. It’s the look that the face unconsciously creates when people hear something that processes a bit confusingly. Only a bit though. The look is a mixture of partial understanding, but at the exact same time the other word(s) create the confusion. I suppose you could call it the “I almost get… I think… what?” look. I’m not sure it’s the type of thing you can practice either, which I like the thought of. It adds to the authenticity of those moments when a do receive the look. Of course there is always the chance that the person listening to me will just get angry because I said something that perplexes them, so instead of the look, they’ll just call me a dirty name and walk away.

To those of you who may not know, I am not a beer drinker. I’ve never even tasted the stuff. I just have no real interest in doing so at this point in my life. Part of the added confusion to this story is that during the time I was creating my beer journal it was during a period in my life when I had yet to taste alcohol in any form other than cough syrup, which usually made me gag and want to expunge all the contents of my stomach. So, likewise, when I started my beer journal it was a touch baffling to those around me.

So what exactly is a beer journal? It’s a documented event wrapped in glass and fill with beer. Here’s how it worked. I was living in Logan Utah at the time, doing that college thing and having a grand time hanging out with friends old and new. Most of these friends were big fans of beer consumption, and in homage to this practice they would create a celebration on almost any given evening so that groups of people could gather together to assist the consumption of this elixir. Yeah, so I went to a lot of parties and drove a lot of people home. Then on April 12, 1999 it just happened. I picked up a beer, two in fact, and stuck them in my pocket to commemorate the evening. 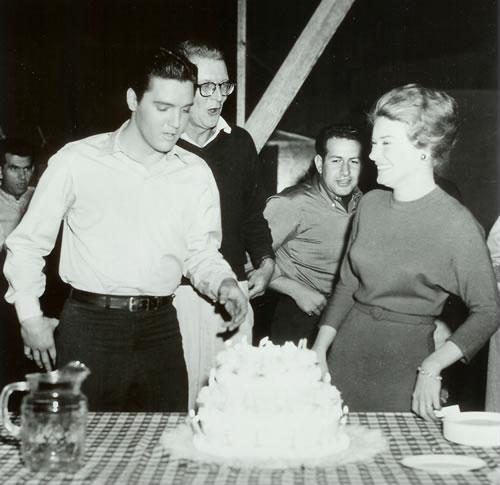 It was for my friend Brandon’s 25th birthday. His wife Jules, girlfriend at the time, had planned a surprise party for him. I went over and played some poker with them for about an hour and then we headed over the Ibis, the coffee shop Jules and I worked at, saying we had a quick meeting and then would be heading to the bar. When we got there the place was filled with friends and beer. Not just any beer, but special ordered beer that Brandon had much love for… Henry Weinhard’s Hazelnut Stout and Blackberry Wheat. So I took one of each, one for the poker night, and one for the surprise party. When I got home I took them out of my jacket pockets placed them on my dresser. And that is how it all started.

Over the months, I when I would go to parties, I would always take a beer home with me. It was always unopened and always a different beer. To those of you concerned that I was breaking party etiquette, it’s not like I was stealing beer. People knew what I was doing. I let them know all about it. And yes even though they gave me “the look” when I told them they always supported me and even started to make sure they would set one beer aside just for me. Granted, to help with this exchange, I always made sure I brought a six pack for people to enjoy. A six to one exchange rate is a pretty good deal, especially if that exchange is beer.

After the first twenty to thirty beer I collected, it was becoming a little difficult keep them all straight. So I invested in some little label stickers and started documenting each beer with the date and event. There was the Moosehead Beer for the Cinco de Mayo / Farewell Liz party… because nothing says Cinco de Mayo quite like a Canadian lager. There was my Icehouse beer, the only can I acquired for my journal, which Jules and Brandon gave to me as my get well beer when I threw out my back and was stuck in bed for about a week.

There was the bottle of Blue Moon for the night I said goodbye to my friend Jasamyn, who was moving to San Francisco. There was the Uinta India Pale Ale for Kyle’s 25th birthday and the Fischer LaBelle for my sister Fee’s 23rd birthday. The Guinness Extra Stout was for my first Eddie Izzard party and the bottle of Melbourne Bros Strawberry for the evening I went to see Tori Amos in concert.

Yes, there were beer signifying more birthdays, move farewells, and even some for reunions of old friends and family. There was the “Be thankful for Friends” party, which was remembered with a bottle of Moretti Birra Friulana. There was a beer for the occasional first date and one for the goodbye to an ended love. There was even the Pilsner Urquell for my first day going back to college. And…

And then it just stopped. Not the parties, just the bottled reminder of them. There were a few reasons for this. The first was the storage of the thing. I was quickly running out of space. My dresser was covered with full bottles of beer, as was my window sill. A beer journal begins taking up a lot of space after 7 months. The practicality was no longer there either. At some point in my life I would be moving and if things kept up, the thought of moving hundreds of full bottles of journal beer seemed like a task that I really had no desire to be a part of. I think the novelty was done as well. I have experienced many grand celebrations and a few unpleasant evenings, it was time to process and remember in a different way. So, I bought a camera. The beer journal ended January 20th, 2000… wow just over 10 years ago. Maybe I should go get a beer to commemorate my 10 year anniversary of my beer journal… hmmm. When the journal ended I had around 60 or different bottles of beer, and one can, compiling my beer journal. Oh, one more thing, trying to keep the dust off of all those bottles was becoming a chore that I never really wanted in the first place. 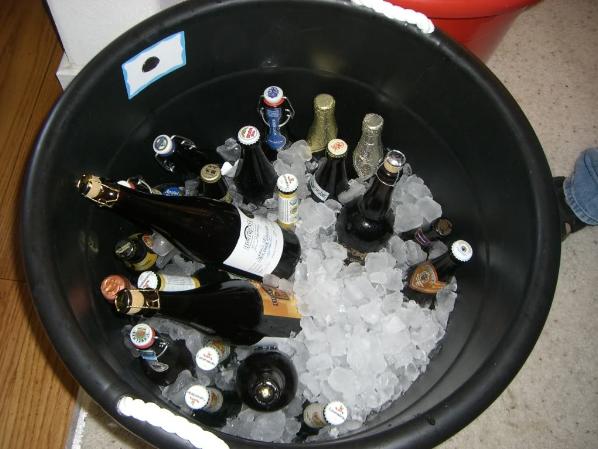 Then came the question, “What the hell do I do with all this beer?” Correct! You drink it! Well, not me personally, but I had an evening, a sort of celebration. I invited an armful of close friends, who drank beer, this was key, and with three or four coolers of ice we chilled all the beer and I played MC. People would grab a beer and show me the label. I’d then tell them the story about the evening that the beer was a journal entry for. Then we would either toast the remembered celebration, or give one last goodbye to those that I had said farewell to.

Near the end of the evening, all the attendees, well those who could still speak coherently and mostly stand, told me it was the most amazing and brewfully tasty party they had ever experienced. I’d like to think my stories helped them come to that conclusion, but I have no misconceptions. I know and you know it was predominantly, say 99.999998%, the 60 different types of beer they helped consume through the evening. Alcohol is amazingly resourceful in that regard. Still, it was a great night for me as well. By morning all beer had been opened and most of the bottles were empty. I think Rob was the one who said that the hangover was worth it and he’d gladly do it again if I ever made another beer journal then needed to be let go.

I’m not sure I’d recommend this practice… well repeatedly anyway. For me… I think it was worth the experience at least once. Who knows it might even be more worthwhile if you are actually a beer drinker. Although, I’m not sure how effective an evening of storytelling and letting go would be if the storyteller became schnookered during the process. Yes schnookered. This is a technical term meaning epically inebriated, plus… it’s a lot more fun to say than “really, really drunk”. 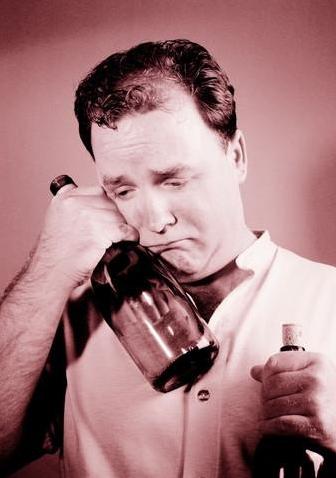 If you happen to be a sad drunk it might be a little rough on your friends when you you get to the beer that you picked up as a journal entry for your favorite teams playoff finals cup bowl game and they ended up losing. Causing you to get all emotional while drinking that beer and telling everyone it tasted of tears and failure. Then while cradling the empty bottle in your arms you start weeping. Remember the celebration of the beer journal should be a positive thing. If you only get beer entries for the bad things that happen I recommend stopping the beer journal before you even start. Then again, if you decide to give it a go, it then becomes all about your and your journey, so who knows, maybe it will help. Good luck to any of you that decide to give this a try. Feel free to send any questions you may have about it.

As for you, any of you have your own odd type of journaling? What are your thoughts on the beer journal?