by Richard Timothy | Sep 27, 2010 | Fiction, I Think There's a Point, Observationally Speaking, Something I Know Nothing About, Visual Smirk | 1 comment 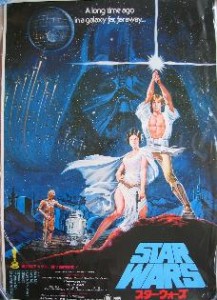 The amazing thing about releasing a creation to the world is that one it is released, it becomes it’s very own force, which is something to be dealt with. The thing is one you put it out there it is out of your hands, and regardless of how much you want to keep hold of it and keep it pure, there is going to be someone out there with a little too much free time on their hands that is going to bastardize the whole thing. This has happened repetitively throughout the ages.

There is one, however, that I feel compelled to share. And it’s thanks to Facebook and the ongoing experience of meeting new people and seeing new profile pictures that makes me smile and want to share some of these unsolicited and experiments that were birthed by the creation that is Star Wars.

I mean sure I could make a comment that Lucas has done more to bastardize and destroy the magic that was the original concept and creation, but that would be a little too easy. So instead I give you a few Facebookian Star Wars themed profile pictures that I feel deserve a little personal insight as well as a gratitude filled nod to whoever created these Smirk inducing images: 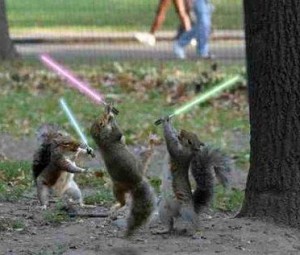 The force has never been so cute and so dangerous at the same time. This is a result of Yoda getting bored waiting for Luke to show up on Dagobah for his Jedi training montage. The squirrels used the force to escape Dagobah to find a nice park on a populated planet where they could do Jedi battle reenactments for, well, nuts. To me, the only comparison that gets close to this trio is a squadron… is that right? Or is it a flock, or posse, or troop… flank!… whatever the word is the rest of it is… ninja bunnies! I mean what is a better or more perfect blend of adorable and deadly at the same time.

Bobo Fett dressed up in a Victorian suit. There is something inherently smileful about a gentleman bounty hunter. This image was taken after Han was frozen and Bobo had some extra cash after delivering him to the Hutt. He opted to go on holiday. As he was traveling around he found a rustic little western town that had one of those old timey photo studios where he went in to play dressed up, and found some cloths from an almost forgotten era just to get his picture taken. I don’t know about you, but there is something about Bobo playing dress up always gets me laughing.

Speaking of playing dress up, here’s what happened when young Leia discovered who her real father was. I can only imagine the inner dialogue that created this for her costume themed 5th birthday party. “Should I be a princess, or my dad… princess… dad? Hmmm… I know! Both!” A pink Darth Vader mask with a tiara, I know Darth wanted to rule the Empire with his son Luke, but had he just skipped that battle and approached the daddy’s girl who knows what direction the empire would have gone once the Emperor was out of the way. 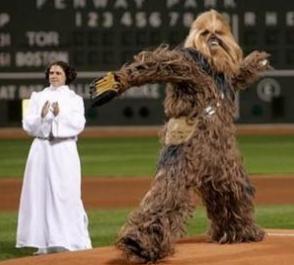 It was a close race, but it happened, Chewie ran for office and won. And even though he was the first Wookiee to be elected to reside over the senate after the Emperor fell, he took the task very seriously. This included the first pitch of the season, not bad form either for considering Wookiee’s are not big baseball fans. They are not terribly fond of sports that require you to catch things in your hand instead of your mouth. It’s an instinct that goes back to their canine ancestors. And who would have expected him and Leia to hook up after things failed with Han. I always thought Chewy had more of a crush on Han than Leia, who knew. Han was still a trooper about the whole thing and was the best man at the wedding. Leia also made a very capable first lady due to all that political training she received when she was a kid.

And finally… a bit of (made up) Star Wars Trivia…

How Carrie Fisher Got the Role as Leia 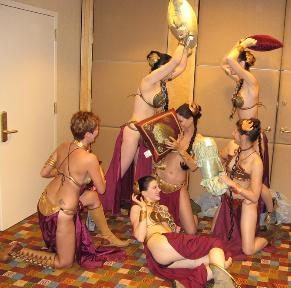 According to my sources (that are completely fictitious) this photo was taken at some StWa-Con (a made up comic book/sci fi convention) where a reenactment was performed to convey how Lucas decided who was going to play the the role of Princess Leia… the winner of the pillow fight would don the Princess Leia mantel. This battle lasted at three days, and Lucas sat in his director’s chair for the entire duration until Fisher emerged victorious. (She might be little, but she can hold her own. Just ask Jabba.)

Well there you have it, some of my favorite random Star Wars themed images from random Facebook profile pictures and the completely bogus stories and made-up commentaries that go with them.