by Richard Timothy | May 14, 2010 | I Just Don't Get It, I Think There's a Point, My Cutie Baby Sweetie Pie, My List of Things that Don't Suck, Non-Fiction, Observationally Speaking | 0 comments 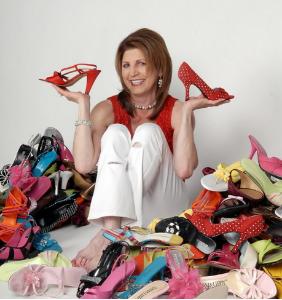 Women love shoes. Now I am not going to say this is a universal truth… like gravity pulls things in, cupcakes push things out, and puppies are cute, but I would dare say that if you run into a woman that is firm in her resole that “women loving shoes” is then maybe then it’s a universal truth. As a public safety suggestion, I do advise that if you are not shoe minded then please do not engage in shoe related conversation with a shoe enthusiast, unless you happen to work at a shoe store. I do also concede that there are some men who share this same shoe affinity, but in my experience, and with the backing of endless Hollywood movies as a resource tool, women are the standard by which we give irrevocable evidence toward the statement, women love shoes.

I do get it concept. So put it in a term that I believe most who don’t understand will, it is their collection of choice. Just like some people collect baseball cards, old coins, toys that are never allowed to be removed from their packaging, old cars that will someday be restored but has been in the driveway for the past 8 years with a blanket over the top of it, or first edition books, some people collect shoes. I guess the key difference between the two is that one of the collections does have a bit more everyday type of functionality associated to it. Do I care that my cutie-baby-sweetie-pie-wifey-pooh collects shoes? Not at all, as long as it gets purchased after everything that needs to be paid has been paid. I am the same way about my MST3K Boxed sets.

I think that may be the line between collecting and obsessing. If you are a collector you get things as you can, when you can. If you are an obsessor, obsessee… if you obsess about your collection and you put a second mortgage on your house so you can buy a 1951 Bowman SGC 96 Mickey Mantle rookie card or so you can buy a pair Stuart Weitzman’s “Diamond Dream” Stilettos that’s where the problem lies. Collecting = fine. Obsession = No! Bad! NO! (and you should probably be hit on the nose with a rolled up newspaper).

Now I’m not sure if this is the type of thing all shoe collectors do, but Angela has a distribution system for her shoes. It’s a type of open grazing distribution where her shoes have free range throughout the house. Usually they congregate in small social groups. Some groups choose to be by the front door. Some chose to take action in the never ending game of hide and seek and some pairs of shoes are convinced is always being played. Think I’m kidding, go look under your couch, or bed, or behind the television, or in your ice box… in one of those spots is going to be random pair of shoes giggling to themselves, sure that they are in the best hiding spot ever created by man, woman, or some combination therein.

One thing about shoes… I highly recommend keeping them paired up, or lined up, or spread evenly apart, but at all costs avoid leaving them in piles. Sure you might think they are just shoes and not bothering anyone, but just last week I noticed a small pair of sandals next to one of Angela’s piles of footwear. She claimed that she purchased them for our nephew, but I’m not sure I trust her explanation. Part of me thinks that it was just a quick cover-up. They were baby shoes, and she has one of those dispositions that baby things are endearing, and cute, and require you to make that “Ohhhhh” sound when acknowledging anything babyish. In her defense I have not seen any little pairs of shoes in the house since we gave them to our nephew, but in my defense I did place all the shoes side by side instead of on top of each other. 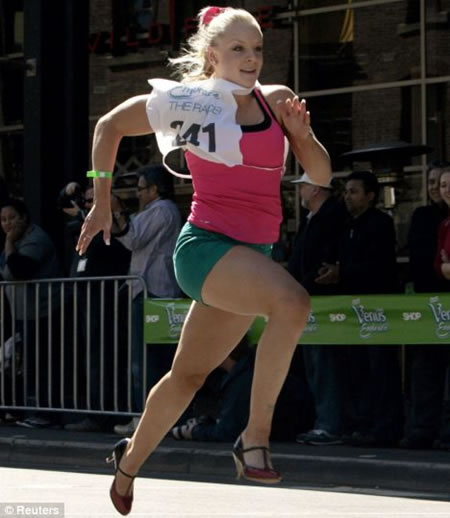 I have come to learn why Angela’s distribution system is actually a system and not a random happenstance. There are two key things that this system enables Angela to do. The first is a sort of working out system. When getting reading for a business meeting, or workshop, or some event that has her dressing up, and wearing snazzy shoes, having the said shoes spread throughout the house enables her to do a few sprints and stair runs as she goes from floor to floor looking for the right pair for the outfit.

The second aspect of this distribution plan is the daily prospect of the element of surprise. Angela is one of those sorts that appreciate a good surprise… or a very subtle simple surprise… or a surprise that had no intention of becoming a surprise, but just sort of turned out that way. Case in point, about a week ago I am in my office, working on a new Smirk and Angela walks in, in this fabulous new flowery purpley dressiley, err, dress. She was on her way to a meeting and came in to let me know she was heading out and to give me a kiss goodbye. As she turned to walk out of the room she noticed a pair of her shoes on the floor in my office, yes even my office is not off limits when it comes to the roaming power of her footwear. 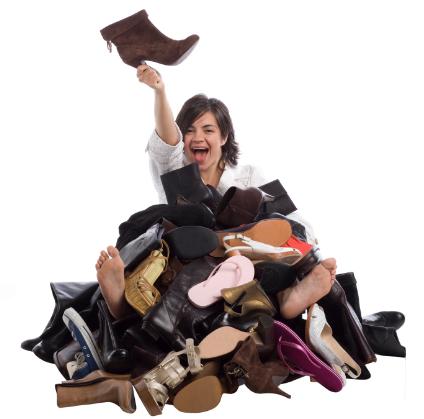 As she looked down she made that “Ohhhh” sound reserved for those moments when someone mostly realizes that what they just saw is exactly what they were looking for even thought they weren’t looking for anything. “I forgot about theses, maybe I should… no they are the wrong purple of purple. I have to go.” I laughed. She smiled innocently, and then was off and out the door with the “wrong purple of purple” shoes still hanging out in my office next to a stuffed Garfield, which I’ve had since elementary school, taunting the cat to try them on.

See the surprise of finding random cute pairs of shoes that you always wanted and actually own, which appear in random situations reminding you of their adorability. Plus it gets you to think about what you are going to wear the next time you go out so you can actually wear those shoes. I’m not sure it’s an actual science, but I’d be there are some people out there that would be interested in taking the class.

For now though, the free range system seems to be working. It’s a system that is at its core, pure Angela… yes Angela does happen to be a verb in our home. Likewise, you would be amazed at the endless supply of smiles, giggles, laughs, and smirks that it gives me on a weekly basis. Thank you sweetie for being so… you!

So, how are shoes distributed in your home?