With today being the 56th anniversary of Albert Einstein’s passing I thought it might be nice to dedicate today’s Smirk to the man with the crazy hair.

I get that Al was one of the most, if not the most, brilliant mind in the 20th century, but for some reason whenever I think of him, the first place I go is the image of him sticking out his tongue at the camera. 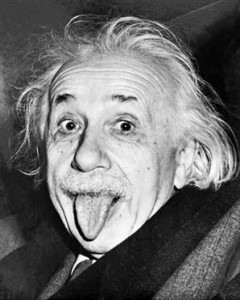 I mean sure eventually I get to the E=MC2 persona, but it always takes a little time. I’ve even watched a documentary about the man and was surprised at how obsessed he became with his work. So much so that his health started to suffer as a result, which, in my opinion, lead to this little know mathematical gem of his:

Even though his scientist friends laughed at this new formula, he knew it was true. He had lived it after all. It was during this recovery that Al discovered the importance of balance in one’s life. Work is important, but for longevity and peace of mind you have to make sure to take time for yourself and take time to laugh with life. This new philosophy resulted in the invention of an entirely new system of math for the purpose of creating the following formula:

And even though those last two equations are not to be taken a factual statements, it does not change the importance on their message or the sure brilliance of the made up math involved. Still, apart from being a genius Al is still a source of many truly grand and Smirk inspiring quotes. Here are ten of my favorites: 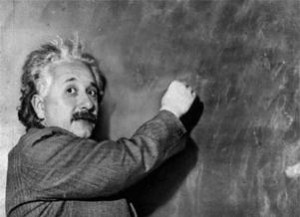 There are a number of Einstein photos available on the net, so to finish off this ode to Al I thought I’d give my own personal interpretation for some of my favorite Einstein photos:

Little know fact, this photo of Einstein riding a bike was the inspiration for Queen’s hit single “Bicycle Race.” 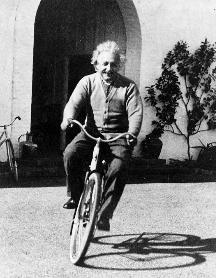 This photo of Einstein pointing at what I assume is a reporter who has a question for him seems to perfectly capture the following made up quote, “One more intentionally misleading statement out of you Mr. Rupert Murdoch and someone is gonna get the hurt real bad.” 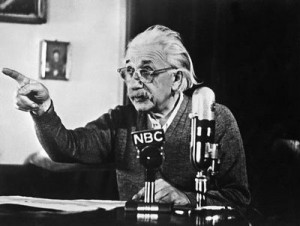 (I was going to go with a “full my finger quote”, but that’s just too easy.)

In this photo of Al giggling profusely, what the photographer failed to miss was the puppy licking Al’s bare toes. 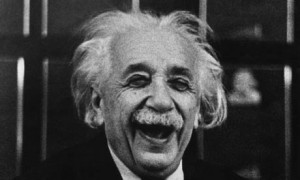 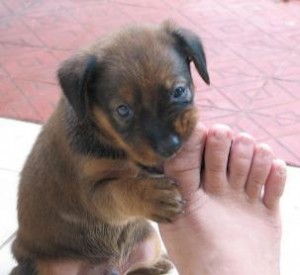 So on this day of remembrance, let me just say thanks Al, not just for all that science stuff, but for keeping us laughing for the 56 years since you experienced life’s greatest mystery. Here’s to you, cheers!