My Pratchett Perspective on Terry's Alzheimer's 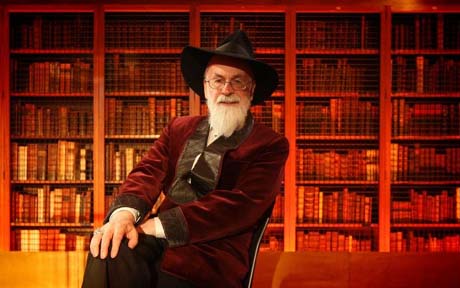 It’s hard to believe that it’s already been three weeks since that crusty eyed morning where I decided to check my messages right after waking up and found a message from one of my readers (thanks Erin) with Terry Pratchett in the subject line and a link entitled Terry Pratchett: my case for a euthanasia tribunal.

As I read the piece I started thinking about it, the big “it”… the “what is it all about” kind of “it”. I mean I know that the situation is sad for both groups of people, the first group being the adoring fans, and the second group, still adoring fans mind you, but family and friends that know him as not just the author, but the person as well. Having personally witnessed what Alzheimer’s does to a family member, there is certain amount of laughter associated with the heartache. My mother said that when it got really bad you had to laugh to keep from crying.

I laughed because it was funny that my grandpa had forgotten what words he considered were bad and kept trying to teach them to my grandma. There is something magically endearing about a little old man trying to teach his wife (she had had a stroke) how to say “oh hell.” He would even encourage her. “Come on Nora, say damn it. Daaammn it.”

When I got to the end of the Pratchett piece I had to ask myself, if it was possible to find a smirk in all of that. Was this even the type of thing that deserved my style of commentary? After thinking about it for a good… however long it take to eat a bowl of cereal, I opted to go with my gut feeling. And, in the words of the always eloquent Foul Ole Ron, let me just say, “bugrit.”

I think as fans, when we first learned of Pratchett’s condition, we took in the full scope of what that all meant. The loss of Terry would be enviable. It was almost as if we started morning the loss of a great man who is still here with us. On a plus note, I still have a number of books to get through still before I even finish the all of the Discworld books for the first time. So, at least I have that going for me. Not to mention, I’m sure he’s still writing more Discworld stories for our eager minds to consume so that we can regurgitate laughter and joy all over anyone who might be in the same room with us as we read it work.

On thought is that it… well, it does help one prepare a bit. I mean sure personal expiration is the only guarantee we have in life, but there’s a kind of appreciation I have in knowing that it’s on its way, as opposed to the opposite end of the spectrum as with Adams unexpected end. No “so long”, no “fish”… it was just a headline that no one was really sure was real or not from the first few times of reading it. Terry’s announcement, I think, has helped prepare us, well, helped me prepare for “it.” His “it”, not my “it”. My “it” at this point is the type of “it” that would result in me exclaiming a loud “she” before the “it”. 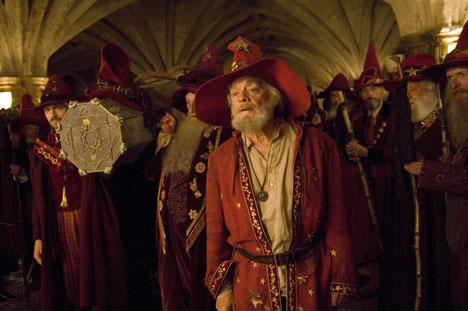 I’m not sure why, but Rincewind has always reminded me of Pratchett, the man, not the author. I’m not sure why either. I don’t know the man at all. I mean I know what he looks likes, but I’d probably not recognize him if I bumped into him on the street. Not unless someone else was there to point it out for me. When it comes to Terry Pratchett, I know the man is an author. Oh, and because of an interview I read in the past year, I know that he loves playing Oblivion. He’s English… I’m clear on my facts in that regard, but I’m not sure about much more. Things like, when his birthday is. Who he thinks would win in a fight between an Alien or a Predator, or what he did before he did what he does now.

I’m not a very good fan am I? Maybe it’s just that I’m not a traditional stalker type fan. Ahh the stalker fan… so I had this friend whose name sounded like the name of a type of dog, but for her sake was spelled differently. She was a huge Dean Koontz fan. I mean huge. So one day, she just so happened to find herself at a Koontz book signing, which was a result of some her getting two days off from work, finding a sitter for her child for that time, getting a plane ticket to California, booking a hotel room close to the book store he was going to be at, and getting to the book store by 3AM so that she would be one of the first in line to meet him.

Out of all the things she could have said to him… the conversation broke down something like this, “I am one of your biggest fans.”
“Really?”
“I celebrate your birthday.”
“My birthday. What do you mean?”

“Yes. Every year. I bake you a cake and everything.”
Dean then writes down some notes and says, “That gives me an idea. Would you be ok with me using some of that in the book I’m currently working on?”

It was the phone call I got after this had happened where she told me about the above conversation, and then screamed in a bouncy, overly excited tone, “I’m going to be in a Dean Koontz book!” I tried telling her that this was not really a compliment. She failed to see how it could be anything other than one.

No, I’m much more of a lighthearted, “Thanks Terry” kind of fan. Sure it would be groovy to meet him, but if I don’t, it’s ok. As for my Terry aka Rincewind perspective, it’s just how I see it. He’s always seemed to me to be a bit of a reluctant hero. That is until the capital “A word” became a chapter in his life. And like those moments when Rincewind becomes fed up enough that running stops becoming the first choice of action. A choice was made to face it head on, which seems exactly what he’s doing now.

He a vocal Alzheimer’s awareness poster child and his donations, as well as his open dialogue towards assisted death, is that Rincewindian stand. Granted, it might not end all that well for him, but as he goes through his journey it is going to help an entire world of people whether he expected it to or not. It’s the type of thing a knight might do, though it’s probably best not to tell him that. 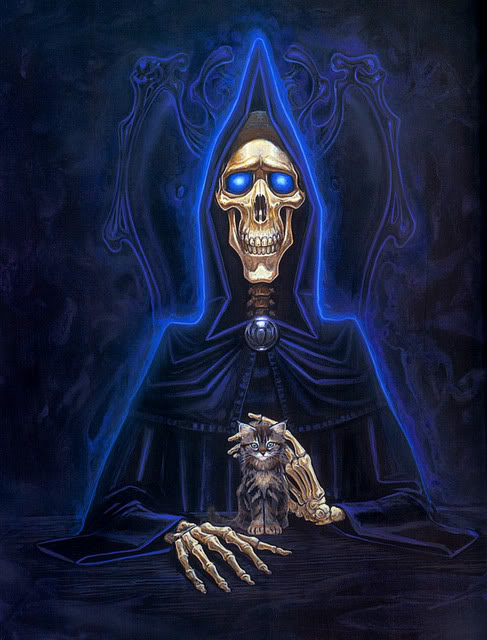 I could romanticize about the literary nobility and juxtapose it with reminiscent alter ego characters that may or may not exist. In the long run I don’t think it’s going to be all that useful. Perhaps it’s just a bunch of fluff in the imagination of a life I don’t know. What I can say is this, if there is one thing I’ve learned from Pratchett’s work, it’s the fascination of life, his fascination with life. Even Death is fascinated by the human experience called life.

As he said in the closing of his Richard Dimbleby lecture, “If I knew that I could die, I would live.” I think the world has a bit of Pratchett left in it. I like to think that part of life is about giving. We have volumes of gifted wit and wisdom from that man. I’ve gotten a few emails from readers who talked about how Terry’s books had gotten them through the harder times of their life. Giving them some comfort, hope, and even more so, giving them laughter when they didn’t think they had any left in them.

In some future day, when the headlines yell that Death has finally come for the old knight, I expect that before shaking hands he’ll wait for Terry to finish his brandy as they both listen to Thomas Tallis play on Terry’s iPod. Then after the official game for his soul is played. Then, regardless who wins, they’ll head to the desert, because it’s his choice.

I really don’t see an end though. As Pratchett has continually suggested, that’s the thing about belief. It keeps giving life to those you believe in, long after the headlines tell you they’re gone.