My June with June 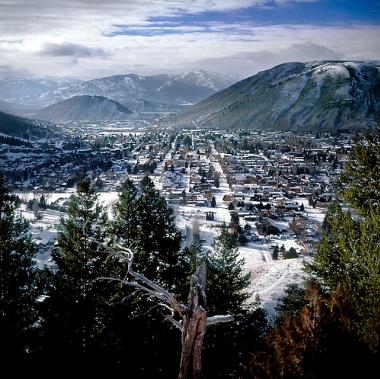 Over the years, mostly the years that filled the first part of my 20s, I spent a fair amount of time in Jackson Wyoming, usually working a summer job, or two, and only once, three. One thing about Jackson is that it is the same Jackson that is internationally visited, loved, referred to and known as Jackson Hole. What is the difference? Jackson is a town and Jackson Hole is an area that encompasses Jackson and about three or four other little towns in the area. When living there, this was usually how we’d tell the difference between a tourist and a local. Tourists always seemed refer to all things Jackson as Jackson Hole.

Of course this did have its opportunities as well. When chatty tourists would ask me where I was from, I would always tell them I was from Navel Wyoming, explaining that it was about thirty miles north of Jackson Hole. Sometimes they’d get it and laugh, and other times I’d get a funny look and they would walk away. There were six different occasions that the joke flew completely over their heads and they just kept asking me about it. Saying things like, “I sure bet it beautiful up there.” Once, I did get an old couple from the mid-west asking me, “Sounds lovely. Does it get a lot of visitors?” That time, I was the one cutting the conversation a little short.

Spending a few summers working in Jackson did enable me to meet some rather eccentric characters. Then there were others that made the word eccentric look like the type of word you’d expect to hear from those creepy kid show monsters that have televisions in their stomachs and a sun made out of a baby. June was one of those people. 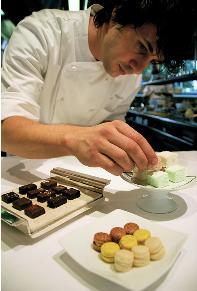 June was the executive chef for a resort I got a summer job at after. I managed to get the job of the Assistant Pastry Chef for the summer with no baking experience whatsoever. How was I able to land such a job? Two reasons… make that three reasons. First, I was one of the few people that she interviewed that said I’d be willing to show up at work by 5am to start up the kitchen, meaning turn on all the lights and get all the burners started for the morning line cooks, and then get baking some pastries for the breakfast menu, or conference breakout sessions, or Sunday brunch. Second, my brother worked there and was the head line cook for the morning and lunch. And third, my brother was one of her favorite employees, which pretty much sealed the deal.

An executive chef is the heartbeat of a kitchen. They compile the recipes. They hire everyone that is going to be working under them. They order all the food. They spend hours doing all of the mundane paperwork required to make a kitchen function properly. Becoming an executive chef is one of those “hey, what happened?!” professions. You spend years going to culinary school, and interning under brilliant chefs, who are quite possibly clinically insane. Then, when you finally get the opportunity to be put in charge of your own kitchen, you predominantly stop cooking and become a paper pusher. It seems to go against the whole motivation for becoming a chef in the first place. Perhaps this is why all chefs are a little crazy.

June… June was… you know when someone says something a little off and you tilt your head to the side as they are talking, as a non-verbal attempt to tell the other person that their current conversation is walking the tight rope of normality. June keeps you tilting you head until the next thing you know you are doing a head stand and she is looking at you with her head half tilted attempting to non-verbally tell you something.

June was British, is British (I don’t think that ever goes away). This meant that when she would yell at you, because if there is one thing that executive chefs can do its yell proficiently, you’d always fight the urge to not smile because of that endearing accent. If you did smile, she would take personal offense to this and her yelling would then become a bit more personal. Things like, “You are a solid example of why cousins should not marry.” 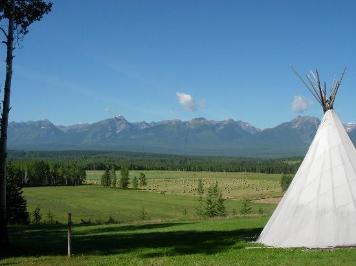 June had gone to culinary school in France, which helped land her a job in the US, in Jackson Wyoming at a ski resort. Now if I stopped there, that is by no means odd or eccentric in any way. Now let’s add that she lived in a tipi… in Wyoming… about forty miles from work… with sled dogs… lots of sled dog… 20 to 30 of them… which she would breed during the summer… and train for and actually race with during the winter months. The first summer I started working for her she was elated because after 8 years she had finally gotten running water installed in her tipi, which make making her morning tea that much easier.

The warmish weather in western Wyoming lasts about three months tops, June, July, and August, and there is always a chance that you could have a random snow storm pass by during any of those three months to remind them that the 7 to 8 months of cold and snow are right around the corner. I don’t care who you are, well unless you are one of those igloo living Eskimos, living in a tipi year around in Wyoming doesn’t just cross the line from basic normality into the region of eccentric behavior, it sticks you in one of those giant slingshots that Wile E. Coyote purchases from ACME, and very rigorously shoots you past the eccentric realm and slams you right into the cliffs of insanity. Now surround that tipi with 20 to 30 separate dog kennels, each one housing an Alaskan sled dog, and you begin to understand the sheer baffling appreciation and unexpected splendor that comes with knowing June.

She did eventually leave the resort and started her own catering business. One June, probably four or five years after I had first worked for June, I got a call from my brother Dave, who still lived in Jackson and was in contact with June. He said that she was catering a big wedding and could use some help getting everything ready. It would be about three days of solid work and she’d pay me $13 an hour. It was $5 more an hour than I was making at my current summer job in Utah, and I did have some vacation time coming to me, so I told him to let her know I’d be there to help out when the work started two weeks later. 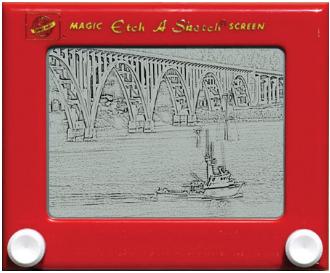 June’s catering business was run out of the kitchen on her property. I was concerned that this meant I’d be cooking in a tipi, which breaks heath codes of all shapes and sizes. When I got to June’s place, which was my first time actually seeing it in person, the layout had this special ambiance about it that for the first two or three takes left your mind feeling a little like an Etch A Sketch. You’d look at the setup and then close your eyes and shake your head vigorously from side to side until the image went away. Then you’d open your eyes and start all over again.

In the foreground of the scene were two well sized sheds that June had built herself. There was about 30 yards of tire trodden and gravel covered ground and between the two sheds. Then between the two sheds and about 10 yards back were 20+ kennels scatter around, each one with a sled dog. Then, in the middle of it all, was a giant tipi, about 25 feet in the air with a little smoke coming out of the top from an old pot belly stove she had installed the first summer she had moved into it.

The sheds were our work spaces. One was filled with coolers for food storage and the other was filled with pots, pans, ovens, and burners. It was fully furnished for all your catering needs. Over the next three days I worked with June getting all the food ready for the upcoming wedding. Things went quite smoothing too, but there were a few truly unforgettable moments that did give me reason to for a little while.

The first was admiration and awe at the absolute knowledge June had for each of her dogs. It was on the second day that a hot air balloon decided to grace our sky with its presence. This was not a terribly common occurrence and the dogs were a bit put off by the sudden appearance of a bright shiny round thing that for all intensive purposes belonged on the ground so they could play with it. They kept barking at it trying to explain that very logic to the balloon. The moment after each bark, June knew exactly which dog had barked and would call out to them by name to get them to calm down. It was amazing. I’ve met some parents with only two kids that are unable to perform that function. June had 20+ dogs and knew every single one of their barks. 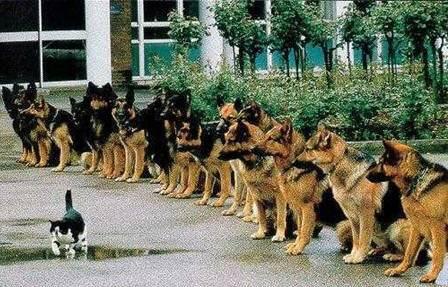 The second unforgettable thing was June’s cat. A cat, I feel, that could give Greebo (Nanny Ogg’s tomcat of Discworld fame) a run for his money. The cat had reign over all the kennels and the dogs knew that the cat was to be left alone. There was one moment when the dogs were all out having a bit of a recess were they could run around and play a little and the cat just sat there in the middle of them all, watching them with the disinterest of a sober college student staring at a lava lamp. As the cat left the recess area, not a single dog attempted to get in its way.

I think one of my favorite moments would have to be when I was outside cooking about 30 pounds of potatoes for some potato salad that we would be making for the wedding luncheon. There I was standing outside between two big pots filled with water, both under an open flame looking at the Tetons in the distance, talk about a kitchen with a view. I’m not sure why, but it made me smile to know that I was cooking up food for a high end Jackson Wyoming wedding in the same manner I did when I was a boy scout some 10 to 15 years earlier, out camping in the woods.

I’m not sure what ever happened to June. I don’t know if she still lives in the tipi, or if she is still raising and racing sled dogs. Regardless of where she has gone, or what she is doing now, I am grateful for the privilege I had of meeting, working with, and knowing my friend June.

If you have any crazy chef stories, please do share.