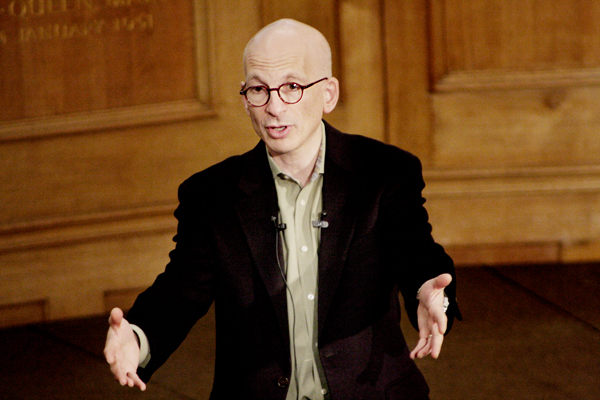 The thing about Seth Godin is that you either know who he is or you don’t… which can be said about anyone really. I guess the difference is that people that know who Seth is are more apt to respond by going, “Ohh.” This is the elongated “oh” that carries with is the suggestion that the listener is both impressed and interested in what you have to say about it. As opposed to the short sounding “oh” which I believed is usually equated to, ambivalence, disinterest, and a general unspoken desire that the talker change the subject to a topic that they are can either exchange dialogue in or that is more about them specifically so they can take over the conversation.

I get there are some of you that gave me that “oh” when I mentioned Seth’s name. Now had I said I had lunch with Brad Pitt, there would be an entirely different group of people sitting up and paying attention. I suppose at some point in the luncheon I’d have to succumb to the inevitable eye candy factor of the experience and respond to all my friends that lunch with Brad was “just dreamy”. Would I have listened to what he had to say… no bloody clue, but my initial guy feeling tells me no, probably not. 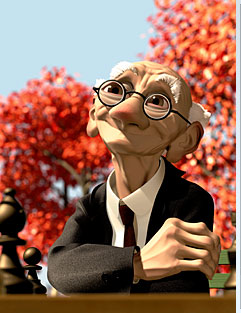 Lunch with set Seth on the other hand was different that how I would imagine an imaginary lunch with Brad. I will start off by saying that Seth is an adorable little man. He’s kind of like a much younger version of that cute old man in the Pixar short Geri’s Game. He also reminds me of that little friendly good natured scientist in movies that is always trying to help save the world. Sure he’s a little quirky and oddly amusing, but once he starts talking everyone else stops talking and listens to what he has to say, because it’s going to be something important that could help the situation and others.

The lunch was really just a luncheon, with a boxed lunch consisting of pasta salad, and green, green apple (rather sour I thought), a bottle of water, a chicken pesto sandwich, and two chocolate chip cookies. I ate the cookies first. Life makes a bit more sense that way.

If I owned a restaurant I’d call it Dessert First. The whole idea would be to have people start their meal with dessert. I know when I go out to eat there is always too much food. Then, by the time I get to desert, I’m too full and am taking leftovers home with me. If you do dessert first, your dessert sales greatly exceed the common dessert sales of an average restaurant. You also fill up the customer with sweet yummy goodness, putting them in an ultimately better mood while they wait for their food. They will also get full sooner, so you can cut back the portions. The customers will eat less at the restaurant, finishing their meal sooner, and still have leftovers to take home and finish for lunch the next day. It’s a brilliant idea, and I’d go there at least once a week just to help support myself.

The lunch with Seth turned out to be a fundraiser luncheon to help assist Haiti. This meant that I was sharing my luncheon with Seth with 700 other people. Lunch was at 11 AM and Seth was presenting from noon to one, and most of the people there were not all that interested in the box lunch being offering in the first place. They were very interested in listening to Seth present though. Having read Seth’s blog from time to time over the past four to five months, I knew a little what he was about, but I’d never read any of his books. Nor did I fully realize how big of a deal he actually was in the field that he is currently fielding. Meaning, firstly, I was one of the few there who was looking forward to my little lunch, and then secondly, I was a touch curious about what this man had to say.

Half way though the presentation, I discovered I was bothered that the people who had put the event together wasted an entire hour for lunch, thus limiting our time with Seth to only an hour. I would have opted to take my lunch with me and eat it on the drive back to work as opposed to before hand. Or just give me a cookie. I’d have been happy to call it lunch if it would have resulted in getting a bit more of his presentation, which was about his newest book in his arsenal of published work. It’s called Linchpin: Are You Indispensable? How to Drive Your Career and Create a Remarkable Future. I’ll be getting myself a copy soon.

One of the things that stuck with me the most was his dialogue on art and how we are all artists. He talked about how being an artist is more than being a painter, sculptor, actor, or poet. Art is about creation. It’s about something that’s personal to the creator and something they are passionate about. For my wife, her conference is her art. For me, my art is my writing. Some artists are computer programmers. Just look at all of the apps available on the iPhone. You have over a hundred thousand artists displayed in the app store alone. I have met a massage therapist who is an amazing artist. Artists are everywhere and they are everyone. The goal is to share your art with the people that want the art you have to share.

Seth also said that art has to be original and ultimately yours, adding, “Marcel Duchamp was an artist when he pioneered Dadaism and installed a urinal in the museum. The second person to install a urinal in a museum was a plumber.” 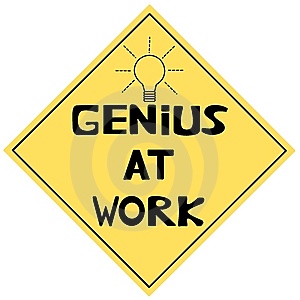 He said we are all geniuses, and I’m inclined to agree. We all have genius in us and it’s different for everyone. Math is my anti-genius. I mean I know a number when I see one, at least I thought I did, then I learned about imaginary numbers and realized my imagination appreciates everyone and everything more if I simply tell the numbers to bugger off and use my genius for writing a piece about the manner in which I’d like imaginary numbers to buggering off and having the readers smile amusingly at that.

All in all, I dug the event, even if it seemed a little rushed and a bit too short. Also, if any of you are entrepreneurs, or have your own business, I recommend checking out two different blogs. One is Seth Godin and the other is a chap named Chris Brogan (who I’ve yet to see live, but who I’ve gotten a lot of useful information from). Both are brilliant and we worth visiting daily if you can, but at least once a week. Some days their information really won’t apply, and other days, it’s pure gold.

There was another little bit of dialogue that I found smirkingly thought provoking, so let’s talk about that tomorrow in Lunch with Seth Part 2… The ADD Version.

Have any of you see Seth live or read his books? What did you think?