It is Ok to Stare if the Art doesn’t Notice?

by Richard Timothy | Oct 27, 2010 | I Think There's a Point, It Seemed Like a Good Idea at the Time, My List of Things that Don't Suck, Non-Fiction, Observationally Speaking | 5 comments 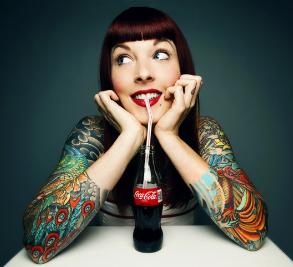 Tattoos, we all have them… or have thought about getting one… or know someone who has one… or know someone who has thought about getting one… or at the very least we have all seen one. I mean, I remember seeing one every week on Fantasy Island. They’re hard to miss really. I see them everywhere, in magazines, on the internet, in movies and on television, at Harley conventions, on people in the military, and even on vampire hunters that are themselves vampires, oh wait; I guess that falls in the movie category.

I know there are some people out there that just don’t get it, and I am almost one of those people. Of course I only feel this way when I come across those few individuals that have tattoos over 90+ percent… it’s the face. I just don’t get covering your face with tattoos. Even if it’s a religious or cultural thing, I just don’t get it. Otherwise, ink up all you want, and sometimes I dig it immensely. Other times, it’s like running into some accident on the freeway and instead of looking away, I slow down and stare at the mess to see if I can decipher what I am actually looking at, curious if it means anything. As I drive away, the only thing I can think is how unfortunate the accident was, and how I hope no one was hurt that bad.

The way I see it, tattoos are just another form of art. When I was taking Art in school, debates would always spring up about ‘What is art?’ I took part in a few of these discussions before I learned the true definition of Art, which is ‘an individual’s personal definition.’ If you think something is art, then to you it is. Is cubism, or surrealism, or pop art, or even impressionism art? For some, yes. For others, no. That’s art for you.

For me, some tattoos truly are works of art, and others, well, just refer back to that previously mentioned car wreck metaphor. Besides, it’s my definition of art that I’m using here, so if you disagree, you’re wrong. When I see a tattoo, or collection of tattoos to make one big tattoo like a sleeve, I treat it, or at least I want to treat it, like a painting in a museum or gallery. I want to first look at the art at a distance and take in the full intricacy of the piece, the colors and details. Then I want to get as close as I can to it without making the alarms go off, or making a curator yell at me for getting too close, and take in one small section at a time. 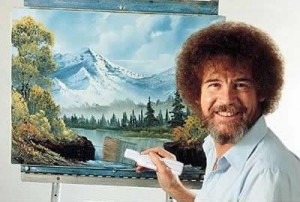 Also, my appreciation for art is enhanced by seeing the original work, as opposed to copies. I can stare at an original work of Michelangelo, or even Bob Ross (I love Bob) for 15 to 20 minutes, but show me the same picture in an art appreciation book, and it’s a turn of a page. If it’s truly an amazing piece or work I might give it a full minute or two. Oddly, I feel the same way about a really impressive tattoo. When I see a picture of a tattoo online or in a magazine, I might go, “Ohh pretty!” but that’s about it. Put me in the same room with someone that actually has that tattoo and it can react in the same way as looking at that original work of Bob. 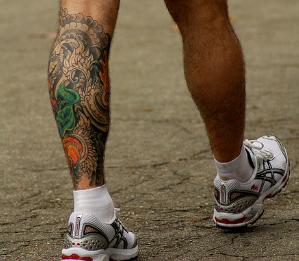 Trouble is, well, troubles, since there is more than one, is… are… the first problem I run into is that tattoos are always on the move. Yeah, so maybe on more than one occasion I’ve done my best to discretely follow someone around a grocery store trying to get a better look at their tattoos. The second problem is that I was raised with the teaching that it’s impolite to stare, which is exactly what I want to do when I see an exceptional tattoo… but I don’t want to be rude, but I still want to stare… and then stare… and then stare just a little bit more… you see my predicament. So I do a series of quick intense staring bursts as I nonchalantly follow them down the cereal aisle, while pretending to look at a box of Fruity Pebbles. Eventually they go their way and I go mine, but I always feel a touch bummed that I didn’t get a better look at the art they live in. Am I proud of this? Well, let’s just say it seemed like a good idea at the time. 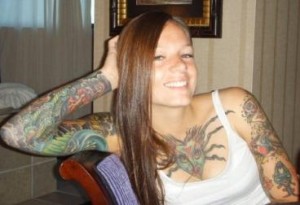 I mean, is there a different code of manners when approaching/admiring a person’s tattoos? Enter my friend Jen. Thanks Jen! Jen is the single most tattooed person I know, and thanks to that, and that our friendship is right around half a decade old, she is my resource for getting the scoop on proper tattoo appreciation protocol. Oh, and for the record, she has some of the best sleeves that I’ve seen. (For those that don’t know, a sleeve is when you have a tattoo, or collection of tattoos that cover your entire arm from your wrist to your shoulder.)

Here are a few things I’ve learned from Jen: Turns out when you stare at a tattoo with appreciation and awe, the owner of the tattoo actually digs it. However, if you are caught staring at a tattoo with a judging eye, which is pretty easy to spot, there is a distinct possibility that you may become the recipient of a barrage of colorful metaphors designed to encourage you to stop your obvious judgmental facial expression.

One important factor to remember when you find yourself in a tattoo appreciating mood, “Don’t touch the art!” If there is one fairly universal rule about art appreciation it’s that you keep your hands off. Believe me, I understand the urge. The first time a saw a Van Gough, I had to fight the urge to run my fingers across it to experience the feeling of all the different textures the piece had to offer. But I didn’t, you know why? Well, apart from getting slapped, fined, and thrown into jail, it’s just plain rude. It’s the same thing when it comes to tattoos. Sure, when I see an amazing tattoo, I want to walk up and poke the tattooed arm with my finger, but I don’t, because it’s an art appreciation no no, and you should really avoid walking up and poking strangers in the arm. You can look, but don’t touch.

Jen told me, “You’d be amazed at how many people think ‘looking at your tattoo’ means pawing you with their hands while they look. I hate that. All of my friends with tats hate that.” She did go on to explain that if you do see a tattoo your really admire and enjoy the look of let them know. Tattoo owners always appreciate hearing that people enjoy their art. It’s kind of like telling a priest you enjoyed his sermon, or telling a Harry Potter fan that ‘Real men don’t sparkle. Real men defeat dark wizards’, or telling a young republican that you miss Reagan too, or telling Hong Kong Phooey he’s a number one super guy. It’s just a nice thing to do and should be well received.

What are your thoughts on tattoo art appreciation?