I am Number Four – A Smirk Movie Review

by Richard Timothy | Feb 17, 2011 | Fiction, Made-up Movie Reviews, Something I Know Nothing About | 2 comments 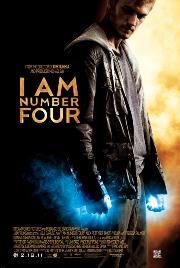 This is a feature I have not done for over a year and one of the few that actually falls in the fiction category of things I write, for my blog anyway. Truth is, I think about doing this at least once every few weeks, but I always end up Smirking about something completely different. So today I figured “why not” and decided to create a new Smirk installment of a Made-up Movie Review. The rules are quite simple, I search the internet to find a movie that is coming out this weekend, which I will probably never see, unless I lose a bet or… no, I really do think that is the only reason I’d be found watching some of these movies… oh wait, that or unless they do a RiffTrax for the film, which is actually how I ended up watching Twilight.

After I find the film of expected avoidance, I then watch the preview for the film. I make a note of one or two lines, preferable taken out of context and write a complete review of the movie that is in no way related to the actual film… in short, I write something I know nothing about. So for today’s made up movie review, I give you “I am Number Four.”

The first concern I had with this film was its title. You know it is time to worry when the movie won’t even invest enough in the story to get names for the main characters. Although I will say that the studio was kind enough to start with Four as opposed to One, Two, or Three. Right off the bat we are informed that One, Two, and Three are already dead… sweet! In one sentence we have managed to skip an entire trilogy all ending in exactly the same way. So what makes Four so much better than his three predecessors? The simple fact that Four is very much alive. 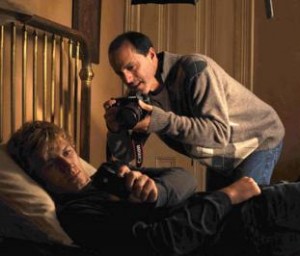 Four, a teenager, who is played by a twenty-seven year old waiter in LA, finds himself is a small town in Ohio with no real connection or memory of his past. He lives with his legal guardian, played by Bruce Campbell, who watches over him and constantly reminds him that knowing about his past in not important. He uses a lot of hand puppets to get Four to open up and talk about his feelings. Each of these conversations ending with Bruce telling Four that feelings are not important, thus confusing Four as to why Bruce’s puppet friends wanted to talk about them in the first place. This causes Four to run out of the house in a rage of teenage angst.

As the days pass, Four begins to realize that he is not like the other teenagers. No teenager knows how it feels to feel out of place, without anyone to talk to, and on top of it all he has a crush on the popular girl who moved there from Arizona, but is really only interested in chiseled supernatural beings; all of whom seem to be on the same decoration committee for the prom. That weekend, as Four is spending it alone, having a John Hughes movie marathon, older men in black SUVs and wearing sunglasses at night, show up and try to kill him. 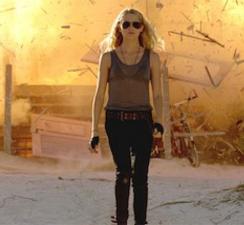 Bruce charges in with a chainsaw in one hand and a rifle in the other, and is quickly tazed, leaving him incapacitated and instantly forgotten about. As the men in sunglasses close in circling around Four, Sex… I mean Six, jumps into the middle of the action in a sexy, yet awesome stop motion pose, that we really only enjoyed once when we first saw the Matrix, and as her hand hits the ground palm down, all the men in sunglasses simultaneously fly into the air and are knocked unconscious as they hit the ground. As she spins her head around to look at Four she tosses the hair out of her eyes and says, “I’m Six.” Yes the sex interest in I am Number Four is named Six. Apparently someone thought it would be clever to have the name of the love interest and the main thing Four wants from the love interest to be separated by only one vowel. 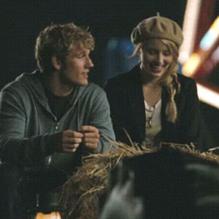 Six smiles, clearly accepting and encouraging this type of verbal banter, which lets us know that the rest of the film will be filled with sexual tension between the two and that the rest of the dialogue between them be filled with this style of banter, which never gets old ever… especially if you are fourteen boy and consider the Six/sex bit to be most brilliant play on words you have ever experienced in your entire life.

As Six and Four flee for their lives, Six informs Fours that he is not alone in the world. There are more people out there with numbers for names. Unfortunately there is a deranged evil leader guy of power that has created a task force dedicated to eradicating individuals who have a number for a name, explaining that One, Two and Three have already fallen victim to this evil group.

As the misunderstood teens continue to run, hide, get surrounded by men in sunglasses, and narrowly escape, Four begins to learn that he, along with having a number for a name, has super mutant powers… and a lot of them. The two decide to seek sanctuary at Xavier’s School for Gifted Youngsters and begin making their way to New York State. Six attempts to help Four gain control of his powers. Surprisingly Four keeps failing, and complains the whole time that it’s really hard and he just can’t do it.

Then, just five miles away from Xavier’s School, all the men in sunglasses and the evil leader guy show up in a deserted town for a final showdown. As Four attempts to use his powers, failing once again, Six attempts to save the day… and Four. She is quickly incapacitated by the evil leader guy, who, against all expectation, has his own superpowers that he’s been hiding from everyone until this very moment. 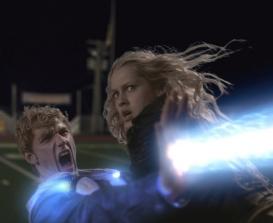 Just as evil leader guy is about to blow up Six using all of his superpowers, Bruce appears charging in with a chainsaw in one hand and a rifle in the other, and is quickly tazed, leaving him incapacitated and instantly forgotten about. This delays the evil leader guy just long enough for Four to leap in and push Six out of harm’s way, knocking her unconscious in the process. For the first time of the entire movie Four is on his own and against all possible expectation the superpower blast from evil leader guy somehow does nothing to Four except fully awaken his own powers. This allows Four to save the day by unleashing all his powers in only the way a misunderstood, chemically imbalanced, angry, horny, teenage boy who only wants a little peace and quiet so he can try to make-out with a hot chick, can… he kills everyone around him except for the girl. 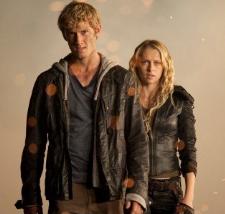 As all of the men in sunglasses run in random directions, burning alive, and the evil leader guy’s head finally hits the ground about three miles from where it left its body, Six wakes up in Four’s arms and instantly begins making out with him. A now awake Bruce makes a small coughing noise to interrupt the make-out session, causing Six and Four shoot a surprised glance in Bruce’s direction. The expression of surprise turns into the mischievous grin of two kids who have been caught in the act… of kissing. The three of them laugh, followed by Bruce saying, “Let’s go home kid.” Four looks at Six longingly. She smiles and nods, and the movie ends with the silhouette of the three of them walking from all the burning bodies and burning buildings as the closing credits begin rolling up the screen.

So, if you are in the mood for a Superman-ish farm boy, turned project Weapon X runaway, saved by a Firestarter-ish teenage cheerleader, who is actually the female equivalent of Obi-wan, there to awaken the Jedi power within a misunderstood anger filled teenager, while they are both running for their lives from some evil group of men that always wear sunglasses and can never hit anything they’re shooting at, followed by a climax of battling mutant powers, and ending in total success because the whole plot of the movie was actually, “Are the two hot ones going to make-out or not?” well then this movie will not disappoint you.

I do hope you enjoyed my Smirk Made-up Movie Review for I am Number Four. Let me know what you think… If enough people enjoy it, I’ll try to make it a more of a regular feature.