by Richard Timothy | Nov 1, 2010 | Adolescent Shenanigans, Holiday Banter, I Think There's a Point, It Seemed Like a Good Idea at the Time, Lightbulbs and Soapboxes, Non-Fiction, Observationally Speaking | 6 comments 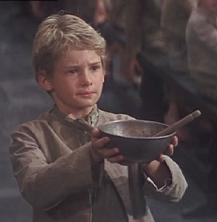 Well, it’s finally happened. This year I became “that guy” for Halloween. No, not “That Guy” that guy, but the one that looks at all those little people dressed up in what I consider to be essentially a collection of multiple dimension origins of alternative Oliver Twist outfits, and thinks, “You’ve had enough.” Sure, I might be stretching a bit with that, but the fact of the matter is that all these kids dress up for the sole purpose of begging for candy. Not that Oliver ever begged for candy, but he is the one person most people reenact when begging, or attempting to beg by saying, “Please sir, may I…” well, you know the rest.

With the sugar overload that is Halloween, this year I found myself thinking, “I should get some apples or oranges for those little high fructose corn syrup addicts, instead of candy.” Then I remembered what I did when I was a kid when someone tried that crap with me. First, I would wait for two or three additional sets of trick-or-treaters to go through the “knock of disappointment” as we would call it. Then I would hurl my newly acquired orange at the distributor’s front door and run like hell. 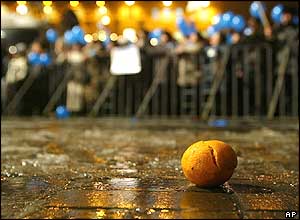 What? When you’re ten and jacked up on sweets it seems like a perfectly good idea at the time. So oranges and apples are officially off the trick-or-treat menu. Also, in the event that you do receive a piece of fruit and take it home, parents never let you eat it because of that stories about razorblades being stuck in fruit on Halloween. So, even though you try to do a good thing and pass out something healthy, it gets tossed into the trash by the parents once they get home.

Instead I opted to go with something else… something in a sealed container. Something so heinous in the minds of most youth that then word got out my house would be dubbed some adolescent term that carries the same meaning and emotional abrasion as the black plague. Hey, if there is one thing I know about little kids it’s their complete and utter lack of being overly dramatic about any and every given situation. I figure if I could get the word out early on then none of the other kids would stop by and our house. We would be skipped out of respect to the commercialized and candy filled holiday Halloween had become in mainstream society. 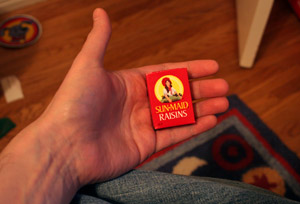 Raisins, I got those cute little boxes of raisins to pass out. Hey, it might have taken me five months to get to them, but once all of the candy from, Halloween, Christmas, and Valentine’s day had been consumed and all that was left were those three boxes of raisins, they too were eaten as a last resort… which means after I my siblings and I had eaten all the sugared cereal in the house as well. But they were eaten, and I remember thinking that they really weren’t that bad… as a last resort.

So did I pass out raisins for Halloween this year and become the person received an evening of disappointed signs from the Oliver Twist wannabes when they noticed me handing them a box of raisins? No, but only because my sweetie-baby-cutie-pie-wifey-pooh took me to the movies to avoid being home for trick-or-treaters. Yeah, so instead of ‘that guy’ I was that other ‘that guy’, which is still completely different from “That Guy!” who usually hangs out at bars making comments about, well, you know. 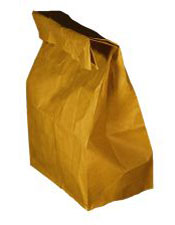 Still, I did have little boxes of humiliated grapes ready to go. It’s funny, it only took me about thirty years to figure out what was going though the mind of that ‘crazy’ lady that gave me my first box of raisins when I was trick-or-treating all those years ago. I get it now, and if I’m home for the holiday next year I’ll probably be passing them out. I’m ok being ‘that guy’ and they will be new boxes, because now, for the next few months I have a two bags of baby sized boxes of raisin to take to work with me as part of my lunch. So, at least I’ve got that going for me.

What are your thoughts on a healthy Halloween?