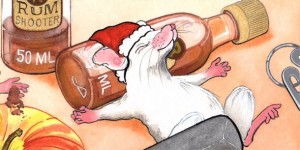 I’m not sure why, but this holiday poem has stuck with me over the years. I believe it was originally from a Mad Magazine that my oldest brother treasured back in the early 80s, but I’m not 100% sure. All I can tell you for certain is that this is a borrowed Smirk, and not something of my own devising. Is it truly mad? Well, let’s just say for the record that I’m about 72% sure it was from the magazine. So please enjoy this Mad Holiday Poem:

‘Twas the night after Christmas and all though the house,
Not a creature was stirring, not even a mouse.

For one had indulged in a tumbler of scotch,
Another smoked cigarettes as he kept watch.

One had used saccharine to sweeten her sherry,
Some swallowed red dye from a maraschino cherry.

A few crumbs of bacon were found were they’d dropped,
A feast had been eaten round some spilled diet pop.

Beer was drunk heartily and all went to bed,
By morning the Surgeon General had pronounced them all dead.

And that, as they say, is it. Cheers and I hope you all had a brilliant holiday.