How about that Earth Day? 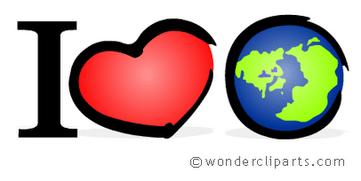 Is it wrong that for Earth Day I had a salad for lunch? I wasn’t trying to be insensitive, I was just hungry… just not terribly hungry. So it’s Earth Day. Um, go Earth! I’ve decided that for Earth Day that I would go ahead and anthropomorphize the Earth for a minute or two, which I’m pretty sure has never ever been done before. I even called my mom to make sure.

I think I’d like to start a campaign to rename planets and moons. According to NASA:

“The official names of planets and their moons are governed by an organization called the International Astronomical Union (IAU). The IAU was established in 1919. The IAU is the internationally recognized authority for assigning names to celestial bodies and any surface features on them.

The IAU recognizes that astronomy is an old science and many of its names come from long-standing traditions and/or are founded in history. With the exception of Earth, all of the planets in our solar system have names from Greek or Roman mythology. This tradition was continued when Uranus, Neptune, and Pluto were discovered in more modern times.”

In my opinion they are a little out of date. I’d like to see them with a more contemporary name. We go with names loosely based off of the 7 dwarves or possibly even the Smurfs:

And for the Sun, I think we should all just call it Frank.

I’m not saying these are set in stone, except maybe the Frank thing, but it’s a smirk worth having.

The point being that the anthropomorphized Earth, let’s call her Ethel. Ethel is that one girl that you somehow had every class with that was brilliant, creative, breath taking, but has no idea how amazing she really is. Plus, she’s always really nice, except when she’s not. Also, when she’d go out with someone that was going to treat her like crap and take advantage of her, you’d always get really upset.

I like Ethel, actually I need to call it what it is and what it is, is love. I love Ethel. I can honestly say that if it was not for her I would not be here today. Yeah, I know, I could do those all day. For today though, I am going to share with you my Earth Day activity, and would invite you all try it after you finish reading today’s Earth Day Smirk.

First, go outside. Once there find a patch of grass, dirt, a tree trunk, something organic that is connected to the planet and touch it. If you are going to stand in the sand, grass, dirt, mud, whatever really. Do it barefoot. The point is establishing that connection between you and Earth… your skin against the Earth’s skin.

This actually started as a result from a conversation I was having with a surfer in Washington State. He was one of those zenish, zenful… zennanite surfers? He was one of those “Surfing is Zen” people. In our conversation though, he brought up his practice of connecting to the Earth. When he was having a not so Zen day, he would go to the beach and cover himself with sand, and let that connection help him in feeling better. Does it really work? I did for him, and I’d dare say it does if you let it. Ultimately, it’s your choice.

It makes for a good Earth Day moment regardless. If you dig it, the nice thing about it is that you don’t have to wait until next year’s Earth Day to do it again. It’s all yours now, use it whenever you want. I do hope you give it a go and at least try it once. I know I appreciated it when I finally tried it. Besides if you do it barefoot there is always a chance that the grass might tickle your feet, so there is a definite chance you’ll get a giggle out of the whole thing… if you have ticklish feet that is.

Any groovy Earth Day moments you experienced this year?