by Richard Timothy | May 5, 2011 | I Think There's a Point, Lightbulbs and Soapboxes, Non-Fiction, Observationally Speaking | 4 comments 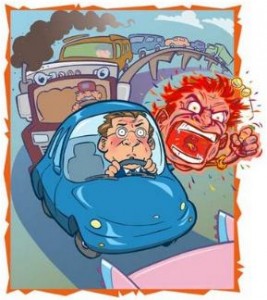 With so many things going on in the world I thought I use today’s Smirk to bring the world together by sharing a theory I have about automobiles. The theory is one that I think most people who have ever driven an automobile might be able to relate to at some point in the life, and the older I get the more it rings true. The theory is in reference to automobiles… instant asshole, just add driver.

Now, I’m not saying this is the case all the time for everyone. If anything it is the case once in a great while for most people, and a common occurrence for very few people every day. I will be the first to admit that I am not exempt from this rule, specifically because I was a teenage driver, which in my case means that the older I get the less frequent my bouts of assholedness while driving. Grated, I did spend a five year period riding my bike around because I could not afford a car, which I think helped equal me out for some of my driving maneuvers in my youth. 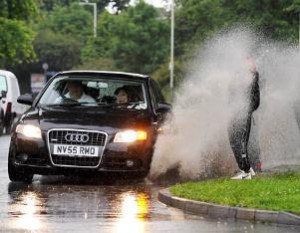 When we get behind the wheel of a car there are certain transformational urges that happen, for example… puddles. When it’s been raining and I see a big puddle by the side of the road and have a ridiculously intense compulsion to alter my course about a foot to the right so I can speed though that gathering of calm water creating a tidal wave of nasty street water covering anything in its path. Now if there is a person standing next to that puddle, well this is the true test of what kind of person you really are. Even in these situations where I just drive past, I find I’m gritting my teeth tightly, as if my intellect is battling my instinct to keep control of the situation and avoid splashing some complete stranger simply because they are in the wrong place at the right time.

In all of my driving experience though, I think the parking lot breeds more vehicle induced assholes than any other driving scenario… except maybe Mario Kart. Here is one parking lot faux pas that always bothers me… when someone with a handicap parking sticker on their car drives past all the open and available handicap parking spots and parks in the closest normal parking spot. Look, I’m not going to judge you for parking in a handicap spot if you have that sticker saying you are welcome to do so, but if you decide not to park in those aptly available designated parking spots and take mine instead, you can bet I’m going to be judging you. Not for being handicap mind you, but for being an ass. 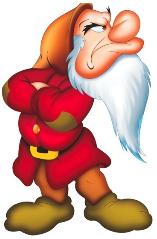 The parking spot thief is one of the biggest assholes found in a parking lot. Here’s what I mean, a little while ago my sweetie-baby-cutie-pie-wifey-pooh and I were in the parking lot of a rather busy store one Saturday afternoon. We noticed that someone was leaving so we patiently waited, with our blinker on signaling to everyone around us that we were waiting for the spot that was becoming available. As the person in the spot backed out of it and maneuvering around us to flee the insanity of that parking lot some guy in a forest green Subaru came in from the other direction and pulled into the spot right as the other person was leaving, and driving around us. It was the most classic “I’m an asshole” move I’ve ever witnessed in any parking lot. The thing was that there was an open spot just two parking spaces down directly across from where he parked. We were baffled at the necessity this crotchety old man had to be such an ass.

I remember noticing a “Clear air” environments logo on his license plate, which got me laughing. A stereotype I usually attach to people that fall under environmentalist category is that of a person that wants planets and people to live together in peace and harmony… it would appear in this one’s case that does not include having people living together in harmony on this planet. I will say he was very strategic in avoiding eye contact with us as he walked past us on his way to the store.

At my current job, we have “expectant mother” parking spots just past the handicap spots, which are just past the executive parking spots… yeah I know, apparently there’s something about being an executive that a person more needy than the handicap and expectant mothers. Still trying to figure out what that is though. The point I want to make is about the “expectant mother” parking spots. Women at my work place can get a pass that allows them to park in these designated spots during their pregnancy, which I think is great. What I struggle with is when an expectant father has his doctor buddy write him a note so that he, the father to be not the doctor, can get one of these passes to park in the “expectant mother” spots. Seriously, if someone is that lazy it’s amazing to me how their sperm ever had the endurance to fertilize and egg let alone swim all that distance to get to the egg in the first place. 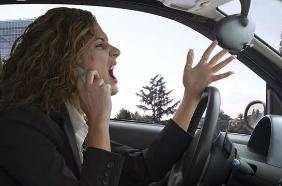 Don’t get me wrong, parking lots can supply some comedic highlights as well, people singing along to their favorite song while waiting for someone to come out of the store in one such highlight. However, this only works if the singers windows are rolled up and you can’t hear them singing or the music being played. I must say that I am always filled with pride with watching these “parkers” and I am able to identify the song they are singing (this usually only happens as a result of both of us listening to the same radio station, but still it is a rewarding). Another similar situation is when someone is arguing with someone on the phone over their Bluetooth headset. All you really see is the over animated hand gestures and a lot of extraneously distorted facial expressions and shouts. I think the only equivalent to this would be watching a mime on crack.

I also feel compelled to point out… has anyone else noticed the irony that the most devoid place of any Christmas spirit is in a department store’s parking lot during the Christmas season? It’s pure chaos in all its ruthless and dysfunctional glory.

Over the years though it does seem that the more time a person spends in a car the more likely they are to cross over to the driving dark side. I’ve met a lot of wonderful people that I hope to never ever get to drive with again, it’s was like witnessing a Jekyll and Hyde transformation, which always happened the second they got behind the drivers wheel. Cars are helpful tools in our society, I get that, but if you’ll pardon this soap box moment, I think we’d all be better off sending as much time out of them as possible… I suppose you could call this my two week late Earth Day message for this year. 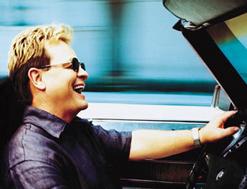 For me, these days I do my best to avoid driving offensively or defensively. I do my best to drive karmically as much as possible. Since I’ve started adopting this driving style, I noticed that I’m much calmer and happier during the time I spend behind the wheel of my car.