What’s Mine is Yours… Except when it’s Not. 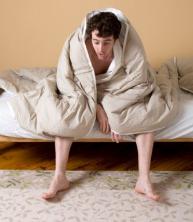 I noticed something this past weekend as I got up and sleepily moseyed into the bathroom, which has always been my movement speed of choice when I get up in the morning and move that short distance from my bed to the bathroom. Granted, there are times when moving faster than a mosey (after you just wake up) are required. Morning sickness for example, and I mean all sicknesses that happen in the morning that is accompanied by that sudden urge to draining the contents of your stomach in a manner that avoids your intestines all together. 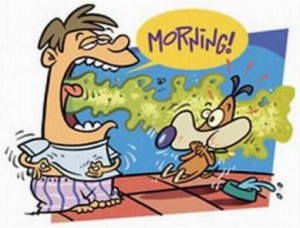 So what was different about Saturday morning? My stuff was missing. Stuff like, my tooth brush, dental floss, stick of deodorant, and my razor. I also noticed that the one of the two drawer units we had on our counter was gone, the one that all my bathroom items were stored on. Thus began my early morning bathroom treasure hunt… well, not that I was looking for a bathroom, I had already found that. What I needed to find was my toothbrush. Some mornings I wake up with a mouth that feels like it has been marinating in a zombies nether region, and I’m sure smells about the same. Brushing my teeth in the morning is essential to my daily bad breath exorcism.

Still, having just woken up, doing a treasure hunt for your toothbrush in the confines of a smallish bathroom goes a bit slower than I would have expected. Eventually, I discovered my supplies had migrated to the top drawer of the remaining drawer set. I’m glad I found it when I did otherwise the sacrilege of my using my sweetie-baby-cutie-pie-wifey-pooh’s toothbrush without her knowledge was about to become a reality. I’m not going to say that I would ever do that, but there have been a few times over the last eight years that I have been questioned as to why her toothbrush bristles were damp to the touch even though she had not yet used it that morning. (Hey, if I didn’t tell her, you think I’d tell you?) 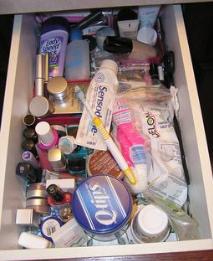 After our day was in full groove I told Angela about my early morning bathroom adventure, she said, “Oh yeah, I forgot to tell you, I moved all of your stuff into that drawer.”

“So what you’re telling me is that after three years being in this house I finally have my own bathroom drawer?”

She started laughing, “Actually it’s not all yours, the back of it has a few of my… well it’s two-thirds your drawer.”

“So what… when we hit the five year mark in this house I’ll finally get my own bathroom drawer?” I asked.

“I don’t think we’ll still be in this house by then.”

“So will I have so start over when we move into a new place?” I smiled.

She laughed some more and then said, “You’re going to blog about this aren’t you?

And I think we all know that the answer is to that.

It did get me thinking about the whole ‘hers, mine, ours’ paradigm in relations though. Here’s an example… our house. The house is ours. However, my office is strictly mine, mainly because it’s the only room in the house I’m allowed to decorate. The rest of the house is hers in regards to how it looks and thanks (insert deity of your choice here) for that. 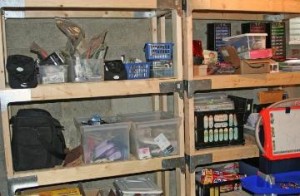 The garage is just like our bed… yeah that needs a little explaining doesn’t it? See, she has her side and I have my side. Now I don’t know if anyone else is like this, but it’s the same side for both. She sleeps on the left side of the bed and parks in the left side of the garage. No idea if this is normal? But it does strike me as something worth smiling about.

The television room is usually ours, unless The Apprentice, Gray’s Anatomy, or one of those Wedding/Wedding Dress themed shows are on. Then the room and television and our insane collection of remotes is hers… Seriously, we now have six different remotes that litter our couch and yes we use all of them at some point depending if we are streaming movies, watching cable, or watching DVDs. Yes, I know, we have a problem and someday I hope we are in a position that we can let some of them be free and enjoy a life of independence. 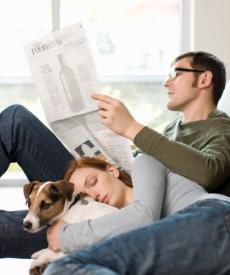 Likewise, I too have my movies that encourage Angela to keep clear of the television room until I’m done. MST3K is the main one. She either has to be very drunk or sleeping on the couch with her head resting on me as I run my fingers through her hair. Yeah if she’s unconscious, I can always get away with watching an episode with her. Sometimes it’s what you have to do so you can spend time with two things that you love… even if one of the loves hates the other loved, which doesn’t have an opinion on the matter because it’s a television show. It works well for us anyway.

What are some of thoughts?