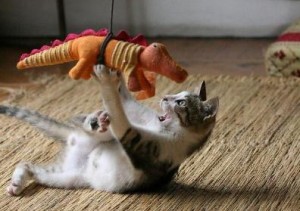 I suppose that if there were ever a really bad B style horror movie made about Tippy and her insatiable craving for attacking the human race, this next story might be a good starting point. I’d like to say it’s about a good kitty gone bad, but to be as accurate as possible we better make it a bad kitty gone worse, well the same I guess. Tippy was always Tippy that never changed. due to relentless teasing by angst filled youth. Part two of Tippy’s attack cat memoirs begins with a sleepover my brother Dave was having with a few of his friends.

Being prepubescent boys there is a certain amount of mischievousness that, when you are of that age, seems funny. However, in the overall scheme of things it turns out not to be such a good idea. Enter Steve. Steve was one of the friends staying the night. While wandering around the house he noticed Tippy in the kitchen drinking out of her water dish. He called some of the other boys over to show them the brilliantly hysterical idea he just had. As the boys gathered around Steve bent over and tapped Tippy on the back of the head so that her face when into the water. 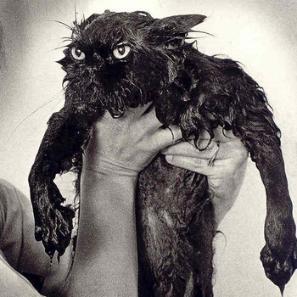 She pulled her head back, shook off the water that covered her face and in her best nonchalant manner, looked up at Steve. She stared at him for a few seconds and then went back to drinking. Steve did it again, and the group of boys giggled. Again Tippy just took a few moments to stare at Steve and when back to drinking. This process continued for a few more cycles, but the cat’s lack of response caused the boys to venture into a different room in the house to find something else to entertain them.

Eventually the phrase that has haunted and derailed the endless joy of having a sleep over with your friends was uttered… it was “time of bed.” A unanimous sigh of disappointment rose from the boys like a cloud of steam rising off the roads after a random rain storm in the middle of summer. But the adults had spoken, so Dave’s group of friends filed into the television room and climbed into their sleeping bags. 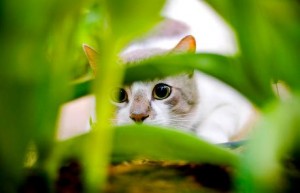 With five boys covering the orange shag carpeted floor, Dave cracked the door open to get a little air flow into the room. Then he flipped off the lights and climbed into his sleeping bag. Just as he was about two thirds submerged in his sleeping bag he felt a soft brush of fur against this arm. The cat was in the room with them. Dave jumped up, stumbled across the floor of boys as fast as he could and flipped on the light. It was too late. Tippy had taken her revenge.

Tippy had her front paws wrapped around the side of Steve’s head. Her back paws were wrapped around Steve’s neck, and she was biting his forehead. Steve attempted to scream out, but because the cat was wrapped around his face the second he opened his mouth to scream all he got was a mouth full of fur. So instead of a scream you got a lot of spitting sounds as he tried to get the fur out of his mouth. The second Dave took a step towards the cat she leapt off Steve’s face and dove out of the room.

After a thorough going over, Steve only had a few light scratches and a little bit of a twitch every time you said Tippy. As everyone calmed down and got ready for bed once again, Dave made sure the door was tightly closed this time. The others had laughed when her face kept getting tapped into the water so there was no telling how far she would go to get where she considered things to be even.

Turns out she was rather content with just biting Steve’s face and calling it even. As I recall, Steve never did bothered her again. In fact I’m not sure he came over much after the incident, just as a precaution. 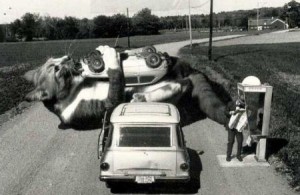 Sadly, I have no idea what happened to Tippy. We had our cousins stop by to feed her while we went away on holiday one summer. When we got back, she was gone. Our cousins told us that they had not seen her for the latter part of the week. They would come over but fill her dish, but it had remained full for three days in a row. There are many possibilities as to what happened to her.

Perhaps the mothership came to take her home because her race of attack felines needed a champion. Maybe she picked a fight with a person who had a concealed weapons permit who didn’t like the way she was eyeballing them. Personally, I like to think that after four days of not having anyone to terrify and spontaneously attack for the sake of attacking, which she did do a lot, she set out on a walk about to reek terror on the world one Tippy attack at a time. It really does seem like the only logical explanation.