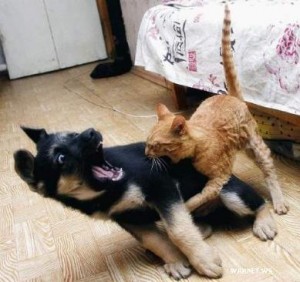 Pets, I’ve had plenty growing up… a few dogs, some fish, even some gerbils, but mostly cats. Yes cats, not necessarily because we were cat people, but because we weren’t pet people. When you own a cat it’s more of a living arrangement where one party takes care of the food and taking out the trash, while the other fills the roll of eating the food and contributing to the trash fill by my making processed food deposits in its very own box of rocks.

Let’s see, when it came to cats the ones I remember clearly are Bertha, TJ, Cosmo, Tigger, Tippy, and Evil… well my friends and I called it Evil, but my sister who actually brought the little thing home called it Misha. Crazy thing is she’s still around. She’s twenty people years old now and going strong. Granted she sleeps about twenty hours a day, but for those four hours she’s awake she’s eating cat food with her one remaining tooth and hiking up and down the stairs trying to find a nice warm spot to take a nap. Still, out of all of the cats we’ve had over the years the one that gets talked about the most when the family gets together is the one we called Tippy. 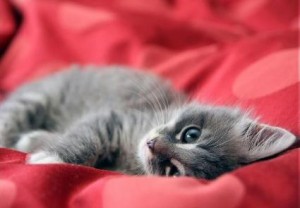 Tippy was more of an obvious name than a clever name. She was a fluffy little gray kitten, except for the tips. Every tip of the little fur ball looked like it had been dipped in bleach. The tips of her ears, her nose, her tail, her paws, even her tummy were all white. I’m not sure what it was about this cat, but if I had to pick just two words to describe it, juvenile delinquent are first ones that come to mind. Tippy had the memory of an elephant and the personality of a vindictive super villain that always got even. To compare it to the great felines in literary history, Tippy was the type of cat that would give Greebo a run for his money.

If you wronged this cat in any way, it remembered who you were and WOULD get even. The first example that comes to mind is my mom. She was in the kitchen one afternoon getting lunch ready. When Tippy saw someone bigger than her with opposable thumbs who could actually reach the cupboards were all the food is, she would wander into the kitchen with the intention of making herself noticed. This was in hopes that the human she was pestering would get her a little shack or even some scraps in place of her crunch dry cat food. 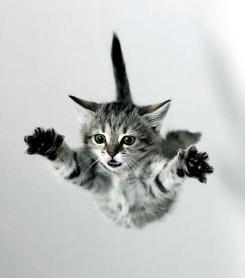 My mother had already kicked everyone, kids and pets alike, out of the kitchen. Tippy managed to run back in the house as all of the kids were filing out of sliding glass door into the back yard. It didn’t take long before there was a clatter of pots and pans and a yell from inside the house. The back door sudden slid open and there was my mom, holding Tippy cat by the immobilizing scruff of her neck. Then in one valiant heave, like a valkyrie doing the one handed underhand tree stump toss at the Valhalla Olympics, let go of the cat while yelling her infamous battle cry, “Stupid cat!” and slammed the door shut, which takes a lot of skill when you are stuck using only a sliding door.

Tippy made the kitty equivalent cry of someone jumping out of a plane without a parachute. As she spun and flew through the air her claws were and paws were out stretched in hopes that she would eventually catch hold of something tangible to hold on to and could then eventually make her way back to the ground. Instead Tippy landed about twenty feet from the back door. The second her paws touched the ground she was in a full sprint dashing away from the house and my mom. 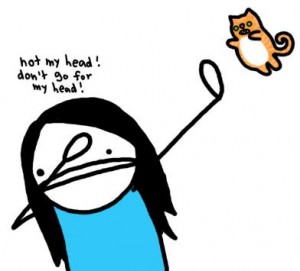 It wasn’t until that evening, after dinner had been eaten and most of the kids were huddled around my mom on the living room couch to have a story read to us, that the cat had decided she had waited long enough. It was time for words to be exchanged between the two ladies of the house. My oldest brother was sitting in a chair across from the couch and watched the whole event transpire. Tippy, in the ultra silent ninja mode that comes to naturally to cats in general, scaled up the back of the couch. Once on the head-rest portion of the couch Tippy crouched as low as she could. Her complete and total attention was focused on my mom’s head. She would move an inch, then stop, then another inch, and then stopped again. She continued this stalking method until she was about four inches from my mom. Then, as her claws dug into the couch, she leaned forward so that her head was about three inches from my mom’s ear and hissed as loud as she could. 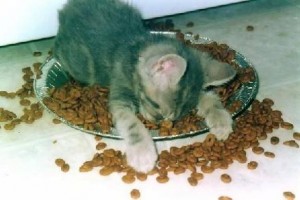 My mom screamed and threw the book in the air while yelling, “Stupid cat!” As soon as the book began its impromptu assertion out of my mom’s hand and toward the ceiling, Tippy leaped off the couch away from my mom and hid out the rest of the night. In the morning the cat walked into the kitchen and sat next to her food bowl. My mom noticed the cat, put some eggs into some boiling water, and then put some food in Tippy’s bowl. They came to a sort of truce I believe. If my mom was alone in the kitchen, Tippy would come in, but always stayed close to her bowl making sure she was out of my mom’s way. In return my mom would give her a little something in return, usually either an egg yolk or the juice from a can of tuna. Of course if any of us kids were in the kitchen, you can be assured that she was in there with us, underfoot and trying to get a sample of whatever it was that we were creating for an after school snack.

There is one more Tippy story that really does need to be shared. My favorite of all the Tippy stories that we acquired in the short time we had her. Come back tomorrow and I’ll tell you all about the slumber party were Tippy tried to eat Steve.

Do you have any revenge cat stories?