The Squirrelly Triumph of ’92 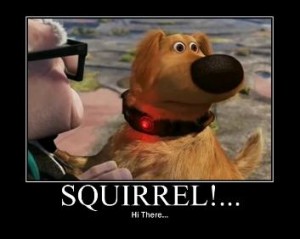 This Smirk happened during my first real summer job after graduating high school. For the record, I did have a job for a month prior to this job. The motivation for getting a new job was not because I was opposed to scooping ice cream for people, or that I had to watch the gift shop at the same time which was at the other end of the building, no, it was the babysitting the bosses thirteen year old grandson who was making $10 more an hour than I was and being held responsible for his mistakes. Not only did a month of this cause me to look for a new job, but gleefully take the very next job I was offered… even if it was shoveling horse sh… cleaning up after horses. Turned out the next job I got was horse and shovel free. However, it did include some cleaning up after others.

I got a job at a resort literally just up the street from the other place I was working at. This job however was sort of a jack of all trades position. I cleaned rooms, washed dishes, worked the at gift shop, waited tables and mowed lawns. Eventually I graduated from room cleaning to cooking breakfast at the restaurant I would wash dishes for at night. They didn’t pay any overtime, but they let me work as much as I wanted, which saved them having to hire someone else that would take away from my hours… I was eighteen and making money. At the time I honestly didn’t care that I didn’t have time for anything other than work and sleep, besides it was only for the summer.

Anyway, this specific experience happened over a three month period and involves Tara, the bosses Doberman Pinscher. She was… old and refused to go gently into that good night. I think she was eleven or twelve at the time, and those are people years by the way, and how that dog loved to hunt. I remember one afternoon, after finish up my lunch shift in the restaurant and heading back to the tiny RV I was renting, to avoid a daily hour and half total commute, to take a shower and change before going back to wash dishes for the dinner shift. Tara came jogged toward me out of the field next to the RV. As she trotted up to me I noticed that she had a mouthful of dirt with blades of grass a good foot and a half long sticking out of each side of her mouth. She was very happy, very excited, and what appeared to be beaming with self pride. 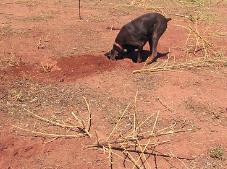 Once in an open area she opened her mouth and let the contents fall out. In the midst of all the dirt and grass and three rocks the side of robin eggs, out plopped a gopher, mostly twitching and defiantly more dead than alive. The only thing I could guess is that as she stood motionless in front of the gopher’s hole waiting for it to come out. When it finally did, she just opened her mouth and charged, scooping up the gopher and everything else in her path. Tara’s owner would tell me stories about her and what an amazing yet patient hunter she was, and how she was much better at keeping the fields clear of rodents than any cat ever would be. He was very proud of his dog, for she had never been defeated… that is, not until that summer when Tara finally met her match.

I called him Arthur, after the king who had spent a very comical scene in a Disney cartoon running around a tree as a squirrel. I have no idea if Arthur was even a he. What I do know is that the battle that waged between he and Tara kept me entertained and always watchful toward what was happening in the front tree lined area of the parking lot.

In front of the hotel was a big grassy area that was then lined at the far end next to the parking lot with thirty foot high pine trees. Turned out Arthur had decided to make those trees his home for the summer. Tara became aware of this intruder very early on in the season and would spend hours unmoving and staring up into the tree Arthur was in just waiting for the little varmint to decide that the coast was clear and that it could run down one tree across some grass and up into a new tree. Arthur on the other hand was well aware of this and I’m sure thought Tara a bit slow in the head if she actually thought that he could not see her standing still waiting for him to come down. 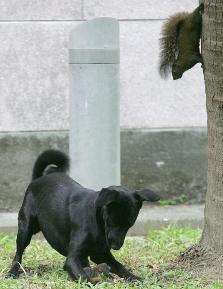 As the summer wore on, so did the intensity of the animosity between Arthur and Tara. Tara was annoyed because she had not yet caught and eaten Arthur, and Arthur was annoyed because of the big dog that would watch him all day greatly restricted his tree to tree access. Eventually, Arthur started getting a bit belligerent about the whole thing. He’d run down to the trunk of the tree, low enough that Tara could clearly see him, but just high enough that she could not reach him if she were to suddenly jump up and snap at him. There he would proceed to bark at Tara for about twenty to thirty minute intervals and then would run up the tree and start dropping pine cones in an attempt to hit Tara on the head, motivating her to leave him alone… which worked on more than one occasion.

The climax of this summer long battle happened one afternoon about three weeks before we closed for the season. I was mowing the grassy area of the front of the hotel using a riding lawn mower. It looked as though both Tara and Arthur had chosen to turn in early; they always did when I was mowing out front. The blaring sound of the lawn mower was more annoying to them than the battle they were having with each other. They always called for a time out when I would show up on that mower. I was on my third yet significantly smaller lap when I noticed one of the pine trees suddenly shake and pull to the left, it the one that was most suited for Christmas decorations since the branches went all the way to the ground. It was a little odd, I’d never seen a tree behave like that before, although I think Tolkien may have written something about the behaviors of trees, but I didn’t recall this specific pattern. As I sat there with my foot on the brake and the motor putting loudly, it happen again.

This time I turned off the mower and stood up, looking at the tree, my head half cocked and giving a very sincere and genuine “what the hell” look. Again, another big shake and pull to the left, then out of the bar marched Mike, heading straight for the tree. There was one more shake and pull to the left before Mike got to the front of the tree. He held up one hand to help block the needled from poking him in the face and then with the other hand he pushed aside one of the needle covered branches and disappeared into the belly of the tree. There were a few more shakes, as if the tree was trying to digest the cause of whatever had just happen under its protective needles, and out came Mike holding in his arms an eighty pound, black and brown Doberman named Tara. 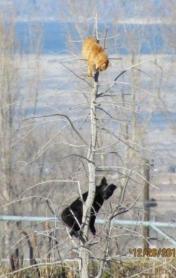 “She was five feet off the ground climbing after that damn squirrel,” said Mike as he walked past me back to the hotel. I started laughing and looked back and the tree. Seconds later out came Arthur running toward Mike and Tara, stopping halfway between them at the tree. He barked twice, turned around, and ran up to a new tree and soon disappeared into the branches. Ballsy little varmint, I’ll give Arthur that. The image of Tara climbing a tree in an attempt to capture and eat her arch nemesis and Mike walking out of that tree with Tara in his arms kept me laughing the rest of that summer. In fact is still does. She had such a disappointed look in her eye too. It was like she had figured out how to defeat her foe and had it taken away from her just as she was about to become triumphant… all because of some silly rule her human had about dogs not being allowed to climb trees.

In the end, I think some might call it a draw since neither one went anywhere, but technically since Tara was the one trying to eat Arthur and since Arthur did not get eaten, I guess you could say he won, but I’d never say that in front of the dog.