The Plane Ride from Hell… thanks kids. 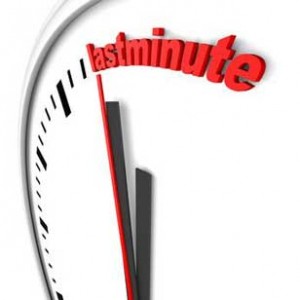 My sweetie-baby-cutie-pie-wifey-pooh and I have a system for packing for trips. This system is fairly common practice for people that have attended, are attending, or may attend the ‘Last Minute School of Preparation’. Although for the record, we did not pack last minute for our Hawaii trip… we packed three minutes prior to last minute. I always look at last minute as, well, just that. The fact that Angela and I got to take a two hour nap before driving to the airport I feel shows you our proficiency at packing just before the last minute.

There are a few things that acting, or in our case packing, last minute enables you to experience. Here are a few of my personal favorites: 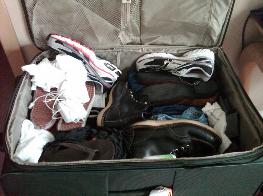 The flight to Hawaii was in two parts. The first flight went to Phoenix Arizona. I slept through the whole thing. I attempted the nodding off routine of falling asleep in an upright sitting position, but when my head dropped down for the first nod it didn’t come back up until an hour later when the captain announced that we had begun our decent to Phoenix. It was grand. The flight from Phoenix to Maui on the other hand was a flyway to hell (feel free to sing that in your best AC/DC voice). 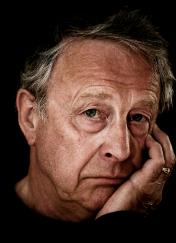 You know that feeling when you get an ice cream cone filled with two scoops of your favorite flavors and just as you step out of the store, even before you have taken a single lick, your hands fumble and you watch in Hollywood slow motion as your treat of creamy goodness falls to the ground to become completely inedible crushing your dreams that there is anything good in this world? Yeah, well I had that exact same feeling when I walked onto the airplane and saw two of the three seats in front of me being occupied by little kids. The mother sitting in the middle seat separating the two children is what gave me a false sense of hope that maybe it wasn’t going to be ‘that bad’. Damn you ‘false sense of hope’ and your deceitful ways.

The sperm donor, I mean father, was in the chair across the aisle. Actually scratch that, he was a donor because during the six plus hours on the flight I saw him do zero in regards to being a father. In fact I would give him negative points because at only one point during the flight did he remove his headphones and stopped watching movies on his iPad. It was during this iPad break that his wife actually told him, “I need some help. I am asking you to help me.” His response to this was to put his head phones back on and ignore her and the kids with even more vigor than he had done before. 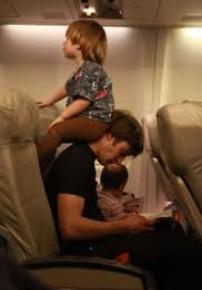 The little boy was by far the more horrid of the two evils, er kids, mainly because he would not shut the hell up. Seriously, for the entire flight he did not stop talking once. And the extent of the mother’s parental ability was to remain sitting in her seat and say “shhhhh” repeatedly and then ignore the kids. At one point the little monster had to go to the toilet. He did this by announcing to the entire plane that he had to poop. Then, because there was a line to get to the toilet, he spent five minutes waiting for his turn standing in the aisle announcing that he needed to poop. He even informed the mother at one point that he was just going to poop in the aisle. The mother had the insight to hold on to his hand while they waited in line after his started to undo his belt after the pooping in the aisle comment. 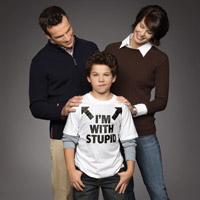 You know, I miss the days when parents would beat their children. Not with the excitable vigor of Rocky Balboa taking on the USSR, but a nice heartfelt smack on the rump when the kids were being little shi… fecal matters. I mean I know it’s the parents fault, but perhaps if the parents had been beaten as children then they would have not grown up to be such worthless parents themselves. Besides, let’s say a kid throws a fit on a plane and is making the plane ride a horrific experience for everyone on the plane, I think that spanking the child in front of all of those people would be a nice way to publically apologize to everyone on that plane for your failure as a parent and your child’s lack of behavior. I know I’d appreciate seeing the little bastard getting a quick smack on the butt. I’d probably even say thank you.

Now even though I’m a reverend I’m not the type of person to bless people. However, if I thought it would do any good I would bless this family with infertility, sterility, barrenness, and unfruitfulness … and a lifetime of failures in the adoption department. I mean sure let them have a long full life and die of natural causes, but family lines go extinct all the time; I just happen to be of the opinion that this family is one that deserves be part of the family line extinction.

However, there was one positive thing that happened from all of this, the sheer nirvana I felt getting off of that plane and away from that family. Sometimes it’s the little things you have to take with you and that one lasted the entire time I was in Maui. Hell, it even got me through the two and a half hour delay and entire plane ride home.

What are your thoughts on the topic of bad kids and worse parents?