The ‘Not so Much a Miracle’ Whip 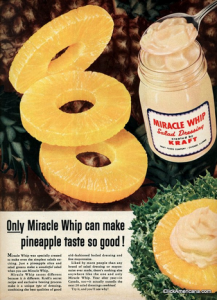 As an average person who enjoys the occasional television show, and, just like anyone who has ever enjoyed the brain numbing effects of spending an hour or so in front of the t.v., I too have a deep rooted despise for the one thing that constantly detracts from my favorite shows, those damn commercials.

Every once in a great while I’ll admit there are some commercials that I might refer to as clever or a good ad, but sadly due to the unrelenting redundancy of these ads, they go from clever to unrelentingly annoying after the third viewing in an a half hour time slot. As a result I consider commercials to be the leading cause of lowered brain activity and ADD and the world. To counter this, I have started hitting the Mute button every time a commercial comes on. This has helped reduced my instant and uncontrolled distain for companies and their products, and in turn makes my life a much more relaxed and groovy experience.

I’ve noticed that my intense dislike for commercials has made me a bit more critical about ads and the message they are trying to convey. One commercial campaign I’ve noticed lately that seems incredibly poorly devised is the one for Miracle Whip. 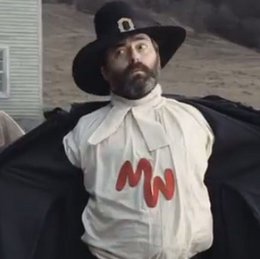 In the one commercial I’ve seen it plays out a parody of the Scarlet Letter, but instead of a big red A on the lady’s chest there is a red MW instead. The other puritans in the township seemed moved to possible inflict harm on her for being a Miracle Whip supporter, and in the end she is saved by the town preacher who too has a MW fetish and has been hiding the red MW red letters pasted on his chest under it over coat. The commercial ends with the slogan “Keep and open mouth.”

Yes, ha ha, very punny using this play on words for the phrase ‘keep an open mind’. You commercial people must be so proud. Hey Kraft, if people literally keep an open mouth, guess what? No one is ever going to eat any of your products! It’s a stupid slogan and makes absolutely no sense. If you really want to get people to buy your (in my opinion) nasty product how about making an ad that says if you purchase Miracle Whip you will be entered into a drawing and the winner gets flown to L.A. for the sole purpose of repeatedly slapping the person that came up with the ‘Keep and open mouth’ ad campaign. Hell, I might even purchase a few bottles to up my chances at winning that honor. 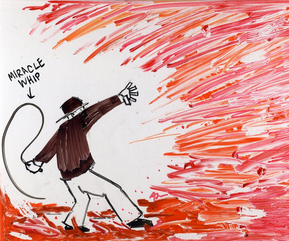 And while I’m not the subject, Miracle Whip? Really? Anyone else find flaw in this name? When I think of those two words together as the subject of conversation, a miracle whip is what I could call Indiana Jones’ second all-time most important accessory, only a notch below his hat, and not a pigmently challenged goo that has the same consistency as the filling of a three year old lemon flavored Hostess Fruit Pie. 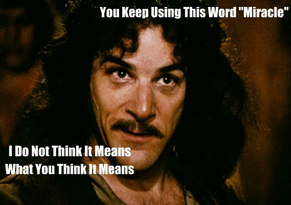 I suppose if they whipped a bunch of random ingredients together to create a mayonnaise substitute and made millions of dollars as a result, then yeah, I might call that a miracle. Still, that miracle happened after they had named this substance. So it still doesn’t really fit. At least they didn’t call it ‘I Can’t Believe It’s Not Mayo’, because anyone who has ever tried this produce can believe it’s not mayo. Likewise, at least they didn’t try to combine the tangy element of the product with the name of the substance they are trying to replace, so jars with names like Tangonase, Maytang, or Mayotango never made it to the store shelves. So, I guess in that regard, we all owe Kraft a miniscule amount of thanks.

If you love it, hate it, or are completely ambivalent toward it, I hope that we can agree that their ‘Keep an Open Mouth’ campaign truly is in poor taste.