The Millionaire Question… What to Wear?

by Richard Timothy | Dec 9, 2010 | I Do Suggest, I Think There's a Point, Non-Fiction, Observationally Speaking, Reviewed and Recommended | 0 comments

So, I just finished day one of a four day conference I’m attending in DC. The event is called Seven THE Event: Four Days. One Decision. Seven Figures. In short, it’s four sponge filled days where my sweetie-baby-cutie-pie-wifey-pooh and I, and 200 other attendees try to soak up as much brilliantly usable and applicable business information as we can, which is presented by four different entrepreneurs that all make a yearly seven figure income, letting us know that we can too. 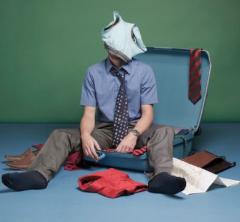 Now, I’m not sure what the protocol is for meeting millionaires, especially at these conference thingies where you’ll essentially be hanging out with them for the day, but when I got up this morning to get ready I did have a thought. Is there a dress code for conferencing with millionaires? It seems like there might me, depending on the situation. I think a lot of the time people dress accordingly based on the culture and/or context in which they will be spending time with that culture. I mean you wouldn’t show up in a tux when going to drink beer and hunt woodland creatures with residents of a trailer park, unless you lost a bet or something. Likewise, it only seems right that you wouldn’t show up for a millionaire (x 4) hosted conference in a hula skirt and coconut bra over your “With a shirt like this who needs pants?” tee shirt, you know, unless you lost a bet. 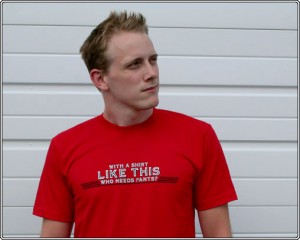 So as I was getting ready for day one, my first thought was, “Damn, I wish I hadn’t lost that bet.” Ok, not really, but I was still a little curious on what to wear. I opted to go with the philosophy, when in doubt just dress yourself… with pants on. Wait, I mean “be” yourself… with pants on, and I need to say the overall effect was quite, well, devoid of having people stare at me in an uncomfortable expression.

I did take a few precautions though. First, I wore a belt so I would not be pulling up my pants every time I got up and/or walked around… it was almost a belt… it served as a belt like tool sustaining a solid pants to waist ratio support system… ok fine, it was the pull string from my pajama bottoms, but it worked just fine damn it. And I don’t think anyone apart from Angela noticed. At least she’s the only one that said anything to me about, and since she’s the one that is most likely going to forgive me for what I’m wearing, I really don’t mind with she shakes her head in disbelief and what I occasionally attempt to pass off as fashion for the sake of functionality.

Second, as I was putting on my least wrinkly dress shirt over my tee shirt before leaving to the conference, it turned out that, unbeknownst to me, the shirt was missing a button. From top to bottom it went button, button, no button, button, button, button, but thanks to one of the props I had received from the event I was able to have my very own MacGyver moment. I noticed that if I put my name badge on a string and wore it around my neck. It perfectly covered my missing button and had enough weight to keep my shirt from popping open to giving those around me a little flash of my completely nondescript single colored undershirt with absolutely no dirty words anywhere on it. The best part, Angela didn’t even notice the missing button until I pointed it out to her after the day’s festivities had ended and we were enjoying dinner together.

As for the conference itself, there is something incredibly refreshing and satisfying about going to an event where, when something is sharing with the entire audience a profound breakthrough they experienced that one of the presenters encourage the breakthrough by telling the audience to, “Clap that shit up.”

Here are a few of my “ah ha” moments from day one: 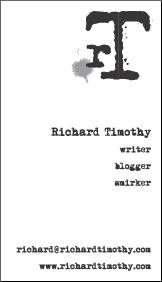 It’s been a brilliant first day overall, the information has been grand, the presenters are personable and solid presenters, and the people attending are really quite lovely and friendly. Oh yeah, I even have business cards now! I’ve even handed out a couple. My tag line: Richard Timothy… writer, blogger, smirker. I know! I thought it rather fitting as well.

Definitely looking forward to tomorrow and I’m pretty sure my wardrobe will be a little more to code tomorrow as well, unless I decide to wear my intentionally ugly Christmas sweater. Tis the season you know.

Any thoughts about today’s Smirk?