by Richard Timothy | Oct 27, 2011 | I Do Suggest, I Think There's a Point, Lightbulbs and Soapboxes, Non-Fiction, Observationally Speaking | 0 comments 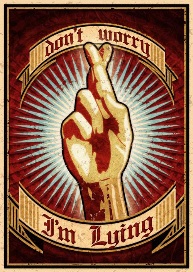 I hear people say all the time that lying is a bad thing. As a child I was taught that lying is wrong, not just wrong, but a sin. We even have laws that demand we not lie and if we are caught doing so we can go to jail, or get fined, or be subject to hours of community service, or all three. The thing is, when you get right down to it, there are plenty of lies that we don’t mind at all, and in some cases we enjoy them quite a lot. So for today’s Smirk, here are a few of those lies that I think we as people thoroughly enjoy.

Let’s start with the Tooth Fairy. Adults tell their kids that some mentally deranged tutu wearing waif with wings, who has an addiction to ivory in the shape of children’s teeth, breaks in to and enters their home while the family is sleeping, creeps into the child’s room and invades the kids personal space by reaching under the child’s pillow, while their sleeping head is on it!, to find a freshly removed tooth. The only thing the keeps her from being a prosecuted is the fact that, apart from being fictional, she leaves a little coin under your pillow in exchange for the tooth, instead of outright stealing it.

Still, when you hear this lie as a kid, you are elated that some fairy is going to be paying you a special visit during the night to pick up your discarded tooth and leave you some cash in its place. You know, if you stop and think about it, the Tooth Fairy is a lot like garbage man. However, in this day and age I think the PC job description would be a door-to-door ivory disposal engineer. The thing I loved about this lie was the reward I got for playing an active role in it. When I lost a tooth I always placed it under my pillow, looking forward to the monetary reward I would be getting for losing it in the first place. Although, now that I think about it, it does kind of teach kids that it’s alright to sell your body parts . . . the more I think about this lady the creepier she gets. 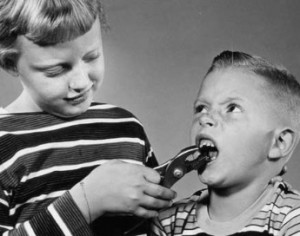 The cash I got from the Tooth Fairy did turn into a bit of a vicious cycle. I always used my Tooth Fairy money to buy more candy so I could lose more teeth to get more money to get more candy. The Tooth Fairy was one of my few money making venues as a kid. If I wanted candy my options for making money so I could get some was teeth (25 cents each), a lemonade stand (10 cents a glass), my weekly allowance (1 dollar), searching the couch for loose change (this varied anywhere from 1 cent to a record $1.87), and birthdays (I could always count on my grandparents giving me a 5 dollar bill each year. Due to these limited money making opportunities I once, and I’m not proud of this, took my little sister’s tooth from under her pillow while she slept and put it under my own pillow in hopes of cashing in on her lost tooth . . . it didn’t work, and I got grounded.

Next we have the over-sized, self-aware, ultra-soft, cuddly woodland creature that has a hide and seek fetish for baskets full of treats and dyed hard boiled eggs. Not to mention, thanks to Cadbury, it is believed that this bunny has the magical power to excrete chocolate eggs. 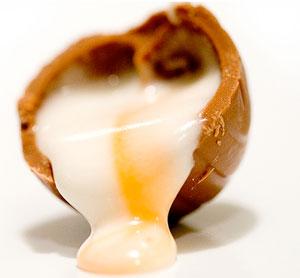 Side note: Thanks to the marketing campaign of Cadbury every Easter, I do always get a cheap laugh when I purchase my one Cadbury Creme Egg for the year and then, while eating it in front of my friends, mention once or twice, “I’ve really got to stop eating this crap.”

I loved this lie as a kid! The idea of a giant bunny sneaking into my house once a year to expel chocolate all over the place and then steal all the eggs we dyed the night before only to hide them throughout the house, was not only a vast source of youthful entertainment, but it was a wonderful exercise in imagination. It resulted in me asking questions such as, “If I was a bunny, where would I hide an Easter basket?” Plus, if you were like me and not that proficient at finding all of the stashes of chocolate droppings around the house there was always the chance of finding a lost stash of chocolate a few weeks after finishing the last bits of my Easter candy. 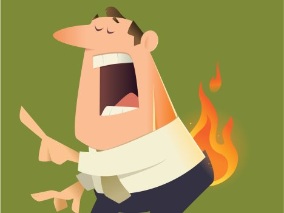 One lie that initially carried with it a great deal of disappointment was the lie about lying. No, not the “you should never lie” lie, but the one about the spontaneous combustion that occurs to one’s britches when a lie is told. Seriously, the first time I caught someone lying to me I was more disappointed that their pants did not burst into flames than I was about the fact that I caught them lying to me. This was a lie I did not appreciate as a kid, but as an adult who tells this lie to children, it is a true delight. The most rewarding part is watching them try to comprehend the cause and effect dynamic that they are pretty sure is flawed, but they don’t want to test it out, just in case their pants catch fire.

The list of acceptable lies goes on and on, Santa being one of the biggest, not just by body mass, but by the reaction people had on it once they found out . . . a Smirk I am saving for the holidays.

If you are still leery of this “liking lies” concept there is one lie we all love to be a part of. The “It’s not sour” lie associated for all things sour. We lie all the time about things not being sour when we know for a fact they are. The sole purpose for this is to get the person we are lying to, usually a child, to put something extremely sour in their mouth unbeknownst to them. Then we wait with high anticipation for the lie to pay off when the kid’s taste buds register they are eating something sour and their face uncontrollably distorts in to a wide array of visual hilarity. In short, we lie to people about sour food so they will eat it and make funny faces that make us laugh. 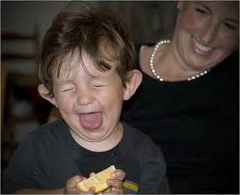 An entire room of adults will take an active role in this lie just so they can all laugh at the faces a five year old makes when they eat a lemon. If you get me anywhere near a baby and a kitchen at the same time, you can bet at some point I am going to be coaxing the little whippersnapper to sample a lemon wedge. And you know what? No one stops me. Know why? They, just like me, can’t wait to see and laugh at the infant’s reaction. The “sour lie” has been going on for generations, and I think as long as humans continue to have kids they are going to be lying to those kids about something tasting sour, all for the sake of laughing at their reaction to an unexpected flavor. It’s a lie that we all love to share.

So, what are some of your favorite happy lies?