The Electronic Age of Low Self Esteem

There is a general consensus that our current age of electronic innovations help make the world a better place. I think in most cases they do, but there are always those little tweaks that need to take place along the way, and without those tweaks these innovations don’t always help.

At work they recently renovated the restrooms and installed a whole new row of electronic self-flushing toilets. The simple fact that these exist in the first place is a salute to the laziness of human race. It’s baffling to me that there are some people that view pushing down a handle too much work after they have finished using the restroom facilities. So to help enable these lazy people, someone developed a toilet that flushes for you . . . even when you don’t want it too.

I first time I found myself sitting on one of this new technologically advanced seats, I got a bit more than I expected. I moved from sitting upright to slouching over to take the iconic “thinker” position – flush. I reached out to touch the toilet paper – flush. I sneezed – flush. I threw my hands in the air in a “what the hell” gesture – flush. I was like a flushing announcement to everyone in the room that much more was going on in my stall than was actually going on. I even started holding my breath and holding perfectly still to limit the flush happy sensor. 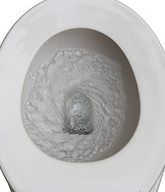 By the time I finished, that damn toilet had flushed at least nine times in three minutes. I hadn’t wasted that much water since I was 10 and discovered you could lay out long rolled out piece of toilet paper. Then place one end of the paper into the toilet and flush. I’d laugh hysterically as the paper got sucked into the pot, kind of like it was sucking down a giant flat spaghetti noodle. I even got one of our cats chase it a few times. I even got it to almost dive head first in the toilet once trying to catch the paper.

The point being that these things that are supposed to help don’t always do that, and sometimes they can make things a little worse.

A few years ago my sister told me about a friend of hers. They were hanging out at a club one night and her friend when to the restroom to freshen up. Well as her friend leaned forward to look into the mirror to touch up her lipstick her heard a short buzzing noise. She stood upright and looked from side to side. There was nothing, and no one was in the room with her. So she leaned forward again to continue her primping, and sure enough the buzzing noise happens again. She looks around again, still nothing. 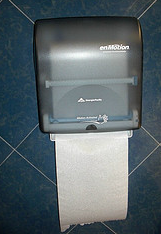 This little situation keeps happening for the remainder of the time she’s in the restroom, and finally, after clearing up any smudges and smears that may have occurred as she had been dancing she turned around to leave and there stuck to the wall was the buzzing culprit, an electronic paper towel dispenser. Every time she leaned forward her backside set off the sensor and it would spit out a piece of paper towel. The dispensed towel was all the way to the floor and starting to pile up by the time she turned around.

She rushed out, found my sister, and report to her that, and I quote, “My fat ass kept setting off the paper towels.” She was already concerned about the size of her derriere, and this experience only helped to reinforce the belief that it was much bigger than it actually was, thus aiding in the lowering of her self-esteem.

Now even though my ass has never signaled to a paper towel dispenser that I need a sheet as I bent over the sink to wash my hands, I can see how I might take it a bit personally. And now thanks to that type of experience, technology has aided humanity to create the, “Does this sink make by butt look big?” conversation . . . A conversation I never would have imagined possible.