The Depower Plague of ot '10

by Richard Timothy | Jun 9, 2010 | I Just Don't Get It, I Think There's a Point, It Seemed Like a Good Idea at the Time, Non-Fiction, Observationally Speaking, Public Service Announcement | 3 comments

I may have been mostly joking when I said there was a conspiracy going on when I had two smoke detectors go lame on the same night doubling their efforts to keep me awake all night due to their battery supplies running a bit low… and by mostly joking, I mean completely. That being said, let’s take a look at what happened to me today. 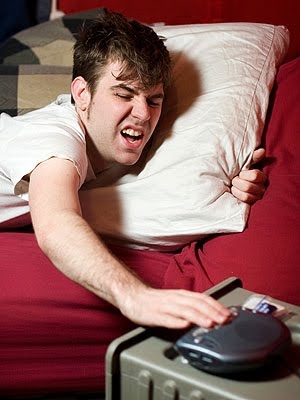 I was a standard work morning. I’m not sure why, but if I have nothing motivating me to get up and go to work, I’ll either get up rather early, or around noon, depending on what happened the night before. But on a typical work day, it’s pretty average and consistent for me to wake up two hours before work, look at the clock to make sure I have two hours to go until I need to be at work, and then I slap the snooze button with the fervor of one who is a trifle annoyed that a little inanimate object had the audacity to work properly and wake me up when I asked it to. Stupid alarm clocks anyway. Then for the next hour I continue to have a losing battle with the snooze button.

After about an hour of this, I reach a coherent level of self realization and admit that I have lost that battle and get up for the day. This gives me 15 to 20 minutes to shower, and 10 to 15 minutes to get dressed and out the door. Then I begin the 25 minute drive to work. This morning was precision as far as that standard goes. It was during the drive to work that I noticed my car was a little thirsty and that I could also use a little liquid snack to count as today’s breakfast as well. I mean it did seem like a good idea at the time. I pulled in to a gas station, filled up the car and then went inside to get a spicy V8 and headed outside to get back on my way to work. 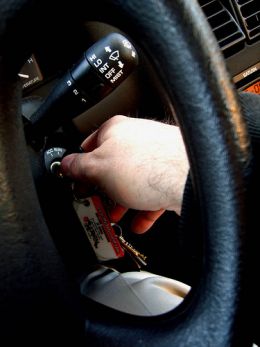 I jumped in the car, pushed in the clutch, and turned the key, and was greeted by … ________ (click). There was nothing, no sound, no lights came on, no radio, no AC, nothing, except a very soft click, which after two more turns of the key fell silent too. My battery was not just drained it was dead, kaput… no more. I would have looked into the trunk to see if I had jumper cables, but I had no power to open the trunk. I did learn that I only have an ignition key which is not the trunk as well. There is, indeed, a difference. So, see I did learn something new today!

Still, how does a battery go from a quick and easy start up first thing in the morning and no issues what so ever getting 10 miles from my house to a gas station, to no charge at all simply by turning it off for about 5 minutes? It was just sitting there with zero power being drained from it and then bam! Nothing! Dead battery! So I did what anyone in my position would do, no I didn’t ask a stranger for help, I’m a man, we’re genetically wired to only ask for assistance from a stranger when no other options are left. This is why it’s almost impossible for us to ask for directions… it’s not our fault. We are born that way. Instead I called my office mate to see if he had cables and a little free time for head down the street and help me out.

Now had Angela been home, yes, I would have called her first, but she was out of town that morning and wouldn’t be back until that afternoon. And because work was only about 20 blocks away, it wasn’t too far of a drive. Sorya (pronounced Soy-ya) showed up about ten minutes later. As we attached the jumper cable to his car batter and then mine, he thanked me for getting him out of the office for a little while, and I, in return, thanked him for being willing to get out of the office for a little while. Ten minutes later I hopped in my car and turned the key. The car stuttered and then started up. Success was ours! We unhooked the cables and got ready to head to work when, in an act of sheer genius on my part, I turned on the AC. My car went from varoom-putt-putt-putt to puwahhh… ah… and all was quiet again.

I tried to roll down my window to yell at Sorya not to leave yet and quickly realized the flaw in this attempt. So I jumped out of the car and flagged Sorya to head back over. I explained the AC oopsy and he told me that the only way I was going to make it to work by driving myself there was by getting a new battery first. Enter phase two of this morning’s adventure. Actually it wasn’t all that complicated, just cash and time consuming. Once we got the new battery, we went to Sorya’s parent’s house to borrow some tools. Fortunately their house was just down the street from the gas station I was at. 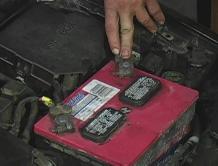 Once the battery was installed Sorya headed back to drop off the tools and I headed back to the auto store to give them the dead battery so I could get $12 back, which I used some of to get a little lunch on the way to work. It was during the last few blocks of getting to work that I realized, “Wait just a minute!” This exact situation happened to Angela’s car about a month ago. She parked outside a department store, when in for about ten minutes and came back out and walla, dead battery. Her car refused to take a charge any kind of charge and resulted in a whole new battery being purchased and installed for her car as well. “Hmm?” 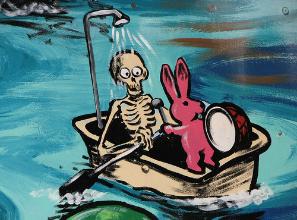 I called and told Angela about the whole thing, and suggested that we stop parking both cars in the garage together. My theory is that her car was apparently giving my car some suggestions for ways to get some additional attention and some new parts… gossipy little things. It also got me wondering about my joke about the conspiracy with the two dead batteries. That makes three dead batteries in three days. It’s like some black plague that is beginning, except this time it only kills batteries instead of humans. Although, if the plague does manage to kill the infernal drumming rabbit, I really can’t see how the end would not justify the means.

At this point the plague seems isolated to just me and battery operated devices that I own. However, if it does start spreading I’ll be sure to let you know. There is good news though. Apparently purchasing new batteries and replacing them with the dead ones does seem to correct and negate the powerless effects of battery operated devices. If this does kill the drummer bunny, I wonder where I go on-line to fill out a Nobel Prize application. I think this whole conspiracy just might give me the push I need this year. Plus, I’ll be sure to verbally acknowledge everyone that comments on this Smirk in my acceptance speech.

So, anyone else experiencing these reoccurring battery power shortages?