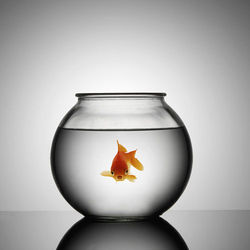 I was reading a friend’s story a while ago about her pet goldfish who had a high jumping fetish. Jumping so high that landing back in its bowl stopped becoming a viable option. The story ended with her finding the fish laying on the floor one morning and her attempt to save if by getting it back in its bowl. It eventually revived, but it’s near death experience had cured it of its Evel Knievel ways.

There is a statistic that I once heard about goldfish, something about them having a three second or three minute memory… I have no idea if it’s true, but from what I recall there was a three in there somewhere. This may help to explain the incessant fascination goldfish have with the bubbles coming out of that scuba guys treasure chest. 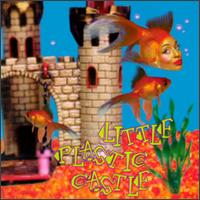 I would like to point out that I am not the only person that has heard this fishy claim from someone else. Even the anti-folk folk singer (which is one of the most confusing music genres I’ve had the pleasure of listening to so far) Ani DiFranco has dedicated lyrics about this very topic. Take her song Little Plastic Castle where she sings in verse two:

“They say goldfish have no memory,
I guess their lives are much like mine,
and the little plastic castle
is a surprise every time,
and it’s hard to say if they’re happy,
but they don’t seem much to mind.”

Cute, catchy, and how that applies to anti-folk, I have no idea. So, is it true? According to Ani “they” think so. Who are “they”? “They” are the “they” that think goldfish don’t remember things. “They” are so sure of this that “they” even have managed to get song lyrics dedicated to share “they’s” belief on it. I, however, am not sold on the idea. 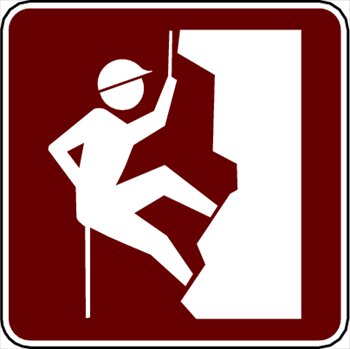 My hesitation to accept this claim begins back in 1994 when I was a broke college student in Northwestern Wyoming. Actually it began five hours away from the college, in a stranger’s house in one of the towns south of Yellowstone National Park. I had made some new friends at school who invited me to join them for a weekend of rock climbing. Being recently smitten with rock climbing, it sounded like an adventure worth having. First thing Saturday morning we were on the road.

Bonnie, the one who invited me, had a friend living in the area we were going to. She had talked to them and they had offered to let us crash at their place for the night. There are two things that stand out in my memory of Bonnie’s friends place. First, they had a keg on tap in their basement. Second, it was my first and only experience with a death wish fish.

After a full day of climbing everyone was exhausted, so falling asleep in a sleeping bag on a rug on a hard concrete floor was not nearly as difficult as one might thing. The friends had a 55-gallon fish tank in the basement, and their pride and joy was a gold fish they had caught in the wild. There was a small spring filled lake in the region, which, because of the spring water coming up from the ground, always stays the same temperature all year around. Even in the middle of winter. Because it was a fresh water lake and always the same temperature people in the area (who had pet fish) had taken to the practice of releasing their pet fish into the lake when they would move away. These friends had gone to this lake to check it out, and ended up bringing home the gold fish in their thermos.

It was a good sized goldfish, about three inches long, but I don’t think it ever took to being back in captivity after being set free. I think this because of the manner in which I was woken up that Sunday morning. I remember hearing what sounded like a wet thump, kind of like the noise a plunger makes when you push it down after it is completely saturated with toilet water… only much quieter, like maybe if it were the toilet in Malibu Barbie’s Dream House. The oddness of the sound got me to open my eyes, but was not enough for me to keep them open. It was only when I noticed a barrage of soft wet flopping sounds that a trigger went off in my head that something was not quite right. 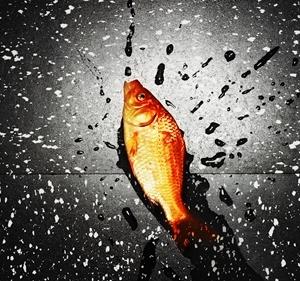 I opened my eyes again and this time sat up and scanned the room. There, about four feet away from me and about two feet from the fish tank was the captive goldfish flopping around on the ground. I looked over to the couch where Bonnie was sleeping and loudly whispered, “Hey Bonnie, their fish!”

“What?” she mumbled as she half opened her eyes.

“The fish made a break for it. Look. Over there,” I told her as I pointed in the direction of the fish.

As she looked over and saw the fish her eyes popped open with a sense of urgency. “Quick, grab it and put back in the tank,” she told me, which sounded a little like a yell because only because we had been whispering and had just woken up, but was actually just her normal talking volume. 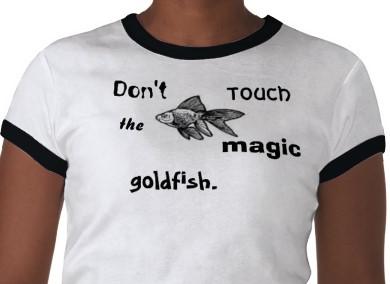 It was a request that had never been asked of me before. There are some questions in life that you run through in your mind a few times. This is so you can give them the proper amount of thought. Then, if a situation occurs that results in the question to be asked, you can feel confident with giving your response. This, however, was not one of those times. I had to make a decision on the fly, a fishes life was at stake! So I muttered the first thing that came to my mind, “No. I don’t touch wet fish.”

Bonnie blinked twice, jumped out of her sleeping bag, rushed over to the fish. She scooped it up in her hands, walked over to the tank, and dropped it back in. After making sure the lid was down, she went back to the couch. As she climbed back into her sleeping bag and nestled back down I heard her finally say, “You don’t touch wet fish?” and then started laughing.

A few hours later we were all back up and loading the car to head back to school. Bonnie, after confirming the whole fish thing was not a dream, recited the story to everyone in the house, giggling the whole time at my “I don’t touch wet fish” claim. Everyone laughed and her friends thanked Bonnie for saving their fish… again. Turns out this fish tried to make a dash to freedom at least once a month. Bonnie has been witness to its attempt once before and had put it back in the tank that time as well. Feeding time is its favorite time to make its freedom leap. It had learned that it gets much farther when the top doors are open.

The friends just figured that it was a crazy fish, but I think it just wanted to go back to its lake and be free. Maybe it remembered its time there, and knew that life in a basement, even with a keg on tap, was nothing but a claustrophobic cell when compared to a natural spring lake, full of other orphan fish that had found a home and a family. 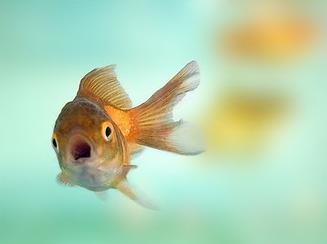 Side Note: This whole thing got me thinking about goldfish memory, so I did a little research. According to Wikipedia, which is really just the ramblings of anyone who thinks they know what they are talking about, here is what it said about the memory of a goldfish:

“Goldfish have a memory-span of at least three months…” It goes on to say, “Goldfish can learn tricks, such as the limbo, slalom, fetch and soccer, using positive reinforcement training techniques.”

… I have no idea! Seriously, how do you play fetch with your goldfish? Do you take it to the beach, put it in the water, and throw a tiny Frisbee into the water for it go get and bring back to you? And soccer? Soccer!? No offense, but if I refuse to touch a wet fish I’m certainly not going to kick one. Oh Wikipedia… you and your pretend specialists. Thank you for that.

So, any of you have any high jumping, death wish fish stories of your own?