The Art of Souring the Young 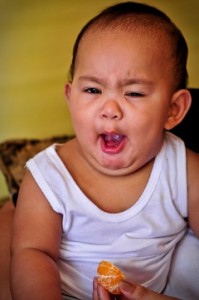 When friends, family, random strangers, or vague acquaintances ask me if I like kids my first impulse is to tell them, “I love kids … especially covered in barbeque sauce.” This usually ends in two ways, either people laugh, or my sweetie-baby-cutie-pie-wife-pooh hits me and then people laugh. Surprisingly, there is the rare exception where people get all bent out of shape because I make a joke about eating children. In my experience these are also the first people to say, “I just want to eat you up!” then they are squeezing the cheeks of their own kids. Yes, it does seem a little hypocritical. The only thing I can figure is that it’s the joke about cooking them, as opposed to eating one raw that gets then all bent out of shape.

Having spent a bit of time with little people this month, specifically spending the Fourth of July with my almost two year old nephew and with my friend’s over two year old boy (and the rest of the family) I realized something about them … Smirk inspiring in fact. It is the inherent desire to get them to eat something I am 90% sure they will not enjoy, which will be clearly expressed in the face they make after trying the food. I do this for the sake of getting them to make a face that will make me and everyone in the room laugh. The thing is I think all adults have this innate craving to feed kids things (usually sour) that is going to trigger facial distortion from the child all for the purpose of comedic amusement.

There is always the one person that tells the instigator, or sour distributor, not to do it. The thing I’ve noticed is that they never do anything to stop you from getting the little whippersnapper from puckering up, proving that all adults secretly want to give food to kids that are going to make them facially freak out all for the amusement of all the adults in the vicinity. I think the motivation for expressing opposition to the action is in the rare event that the little one freaks out and starts crying, the person who objected can step in to care for the child while proclaiming, “I told you so.” These people love telling this to others and will express their opposition to everything in life just for the opportunity to say this phrase to others.

I am not one of those people. In fact I am the opposite of one of those people and anytime I see a little person in a public where I know the child or the child’s parents I will attempt to get the kid to pucker up as a result of some sour food consumption all for the purpose of laughter. And when I go in for the feeding, all the other adults turn their attention towards me feeding the child the sour food with the expectation that the youth’s innocent response to something completely new is going to make then laugh. 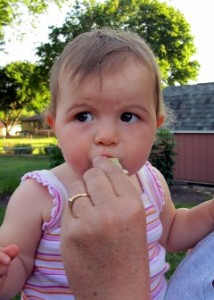 As a veteran in getting kids to consume sour products, there are times when it can backfire, which consists of the kid having the exact opposite response you were expecting them to have. When my baby sister was around a year and a half I managed to get my hands on a lemon wedge and her at the same time (yes, I started this skill very early in life). Everyone was watching in anticipation to her reaction to the lemon. Her first bite resulted in a rather intense squint, which was followed by her little hands grabbing onto the wedge and refusing to let it go while she proceeded to suck the thing dry. Occasionally she would squint intensely when she got an extra dose of sour, but overall she was more smitten with the flavor and not. In the end it was Stephanie: 1, lemons: 0. The thing was her love/hate reaction to sucking on the lemon wedge, along with her refusal to let the sour thwart her desire to eat it into submission, was hilarious to watch for everyone in the room, and therefore a complete and total success … even if it was a backfire.

After years of souring kids, there is never a sure win to getting kids to blindly munch away on whatever you hand them. Around the two year old time frame kids are already developing preferences to what they will and won’t eat. Sometimes kids will refuse the food your give them due to its color or texture when they hold it. This causes them to turn their head from you every time you try to get the food close to their mouth. When this happens there are still ways to get them soured up, it just takes a little preparation … and creative sneakiness.

During the barbeque I attempted to give my friend’s two year old a little taste of lime. I did manage to get the lime wedge in his hand, but upon smelling the lime he quickly dropped it to the ground. Clearly this one needed a different type of motivation to get puckered up for the amusement of everyone else at the barbeque. I noticed that he was a rather big fan of the whipped cream that was on one of the pies that had been set out. So I got a spoon, dipped it in the whipped cream, and then squeezed a lime wedge into the spoon, allowing it to collect behind the whipped cream. Then when I placed the spoon in front of him there was no hesitation in him. He opening up his mouth and taking the whole spoon full of flavors. The buffer of the whipped cream did delay the kid’s puckering up, but only by a second. And when his face contorted into soured bewilderment, ahh, it was laughter filled perfection. 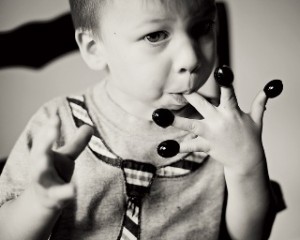 There are times when you can accidentally get comedic facial distorted value from simple food replacements. At the same barbeque, the same two year old was munching away on some blueberries. My nephew (the almost two year old) has a deep affinity for pitted black olives and loves placing them on his index fingers so he can eat them off his fingers, just like you use to do until your fingers got too big to put them on before eating them. Anyway, so one was eating blueberries and loving them and the other was eating olives and loving them, so I figured let’s switch them up. The thing was to the eyes of both kids, the two foods were very comparable, small, dark colored round things that they considered very yummy, but two completely different flavors.

In both cases there was no apprehension to eating the switched food, and the result produced almost the same response from each child. After the first initial chews it was clear that the complete and utter lack of the flavor they were expecting registered in their brain and the food popped out of their mouth and onto the ground, accompanied by a look of utter bewilderment … similar to that of a Firefly fan when they first heard the show was being canceled, only cuter and without all the tears.

So if you happen to be “that person” that is the lead instigator of souring kids in your circle of friends, remember there are times when a simple exchange is not going to cut it and a little improvisation is going to be required. Also, do not forget about the subtle look-alike food exchange. I know it’s a little off the normal play on sour foods, but the comedic facial expression you can get is just as potent as the traditional sour face response. It will almost always get a worthy laugh.

I do need to point to those of you that are just starting to venture out in this role as the instigator of getting the little kid to pucker up; you should only do this once, occasionally twice, to the same kid at a gathering. If you are at a family reunion and have a large family where there are five kids all around the ages of eighteen months to four years old, you are fine getting each one of those kids once, with a total of five different sour face moments. However if you are at an event where there is only one kid, it is completely inappropriate to play the sour face gag on the one kid five different times.

If someone beats you to the souring the kid, the kid is now off limits and you will have to wait until the next party before you are allowed to sour them. It is a “the first person to sour is also the last person to sour” position. If you arrive late, or if someone beats you to the first souring, sorry but you are not allowed to sour anyone. If someone beats you two it, do not start running around to sour any remaining kids at the gathering. You will only look like a lame copycat and not an impromptu creator of comedic joy. You may however round up other kids to take to the one that started the souring process and assist them in the dispersion of sour items to the unsuspecting kids.

Note: It is never EVER acceptable to attempt this on children whose parents you do not know, or who are not in the area when you attempt feeding the child the sour food, unless you are a close friend or relative of the family and have already soured the child at a previous event when the parents were around.

To any of you that are thinking that this is a cruel and wrong, I am going to have to disagree. Little kids love laughter and by eating a fruit of the sour variety practice you are giving the child the opportunity to evoke laughter from an entire room, which they love, and at the same time you are giving them a dose of vitamin C, which is good for them. It’s a win / win.

Oh, one last thing, you must use real fruit for this exchange and not candy. People who are giving fruit to a child are, at heart, good people. If you are doing this via candy, you are secretly considered a jerk for attempting to get the child addicted to processed sugar. Sour candy is acceptable on children that are ages six to twenty-nine. Giving sour candy to a child almost always replaced most, if not all, of the comedic possibilities, to judgments about you as a person along a most of the women at the function secretly hoping you never reproduce. Plus, you risk angering the mother of the child, who (90% of the time) is in the stage where they are refusing to feed their child any sweets. 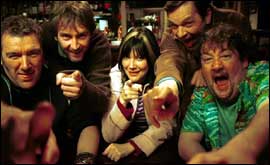 After committing this party foul you must secretly leave the party early, and skip the next party invite as an unspoken apology for what you did. You will then be promptly invited to the next party where everyone will have forgotten your souring faux pas.

I know there are a lot of rules, but should you learn to correctly execute the souring of children, you will fill your life with a collection of laughter filled moments and coveted respect for being “that person” willing to act out of the social norms and gets kids to make sour faces for the comedic benefit of everyone around you. And I, for one, have no regrets.