Sometimes the Crap has to Stop

When you find yourself entering into a long term relationship, you discover that there are certain jobs associated to ones role as male or female. My Smirk on throw pillows is a prime example of this. As the male in the relationship I am in charge of things like taking out the trashcans on garbage day, and bringing them in when I get home that evening.

I’ve also learned that I am the token electronic guru in the relationship. If a new DVD player or sound system needs to be hooked up to the television, it is up to me to do so. I am also the tech support guy. I am in charge of making sure my sweetie-baby-cutie-pie-wifey-pooh’s antivirus software is up to date on her computer and that all her updates are installed. If the internet goes down, I am guaranteed to hear my name echoing throughout the house followed by, “The internet’s not working!”

Then again, she is the laundry leader and is always so good about making sure I have a laundry basket full of my clothes for the upcoming week. The basket usually gets slowly emptied throughout the week, although every once in a great while I do get around to putting my clothes away in my closet. I’ve noticed it’s much harder to find things when I do that though.

She is also the website guru, and it is thanks to her that I have my own website to share with the world. She knows all about the hosting, and name purchasing, and widget and themes installing. She can even help do some HTML coding if needed, which I’ll admit is something I really don’t care to know. 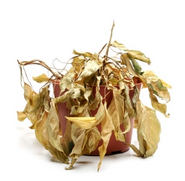 She is also the life giver, as in she waters our . . . her plants to ensure their life continues. After her last trip (a three week stay in North Carolina) I picked her up at the airport and first thing she said when she walked through the door was, “It’s so good to be home.” The second thing she said was, “Did you even water these (plants) while I was gone?”

To which I honestly replied, “Oh yeah, we have plants.”

So after 10 years of being together there’s a certain understanding of who does what when it comes to household chores. And yes occasionally there are some things you are in charge of for a week because you lost a bet, but for the most part we know and adhere to our roles, until last week when a new one trickled into our lives by way of a leaky toilet. Apparently it was my job to fix it, which was a bit of a surprise to me.

My logic was that Angela’s dad is a builder; he has built homes for most of his life so it seemed to me that having her ask him what might be wrong would make the most sense. From her perspective, I needed to call my brother, who has been a home owner much longer than we have and has probably dealt with this type of situation before. You can see how we found ourselves at an impasse as to who was in charge of fixing this problem.

The deciding factor happened as a result of Angela pointing out that she had a conference coming up, which she was getting ready for and that if I had enough free time at night to play games on my PC then I had enough free time to fix the toilet, which she was working in her office. Emotionally, this did not feel right in any way and I strongly disagreed, however, logically she did have a pretty sound point to which I conceded. Damn you, logic! 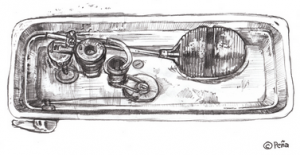 After studying the inner workings of the toilet’s tank for three whole flushes, I shut off the water and emptied the tank. Then I removed a few screws and with the top piece of the part of the tank that seemed to not be working I set off to Lowes to see if I could find a replacement piece, or at the very least get some info on the matter.

Once inside I made my way to the plumbing section and found a guy in a red vest and a name tag, two encouraging signs that he worked there. I told him I was having some trouble with my toilet and he asked me to explain the problem. Here’s what I said:

“The long white piece on the left that has the long stick and the floaty ball on the end doesn’t stop. When I flush the water starts to fill up, but once it gets to the line on the middle white drainy pipe a shhushhhh blub, blub, blub noise happens and the floaty ball holder piece starts bubbling from the bottom as water keeps coming in until it starts draining at the top of the middle drain thing.”

His response:
“Well I really don’t know that much about plumbing, but you could try replacing the piece that is bubbling up. I don’t think it that’s right.”

Once I got home with a new floaty ball holder piece I started dismantling the old one from inside the toilet. Soon I discovered that part of it unscrewed from the bottom outside of the tank. I check my tool supply and as it happened I had nothing that would fit it, so there was no way to unscrew it. It was after ten at this point so I called the repair job for the night. I told Angela if she needed to bathroom that she had better use one downstairs since the one I was working on was not user friends at its current stage. I left all the pieces of the toilet littered across the floor as a reminder that the toilet was not to be used until I had a chance to work on it again. I then washed my hands four times (since I had been playing in toilet water) and watched some television. 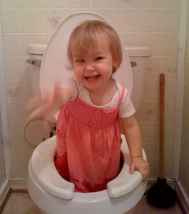 The next day, on my way home from work I picked up a wrench and once I got home finished removing the old piece and installing the new one. “Damn I hope this works” was all I could think of as I sat and watched the tank of refill with water. I had fully drained the tank once and really didn’t want to have to do it again if this didn’t fix the problem. It involved using a sponge and sopping up all the water that didn’t get sucked out when I flushed. Sure, playing in toilet water as a three year old was awesome, but once you are in your thirty’s it does lose all its appeal, and is actually kind of gross.

I squeaked a little in joy when the water level stopped at the designated line on the drain tube. I gave it one flush to test the waters and again it stopped at the designated ‘water stops here’ line with no bubbles and no additional filling. I had fixed our porcelain throne! And you know want? It felt pretty good too. It’s not something I’d ever thought I’d have to do, nor is it something I’d want to make a habit out of doing, but it was satisfying to know that I had gotten something what was misbehaving to function properly. The way I see it, we should all be proud of our accomplishments, no matter how trivial they might seem. You took the time to make things better, and to that I say well done.