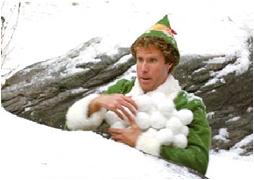 This past Sunday was another snowfall day, which some people say is good because we need the moisture… or something. All I can say is at least there wasn’t 14 inches of the stuff, I think it was about 5, but it was that really thick and heavy snow. The kind Buddy would tell you makes the best snowballs. Which is sort of want I want to talk about. I say sort of because I know at some point this tangent is going to get lost in another tangent and then you’ll go off on a tangent wondering what the hell I’m talking about. Then there we’ll all be… three tangents to the wind… whew, I don’t know about you, but I could sure use a drink. 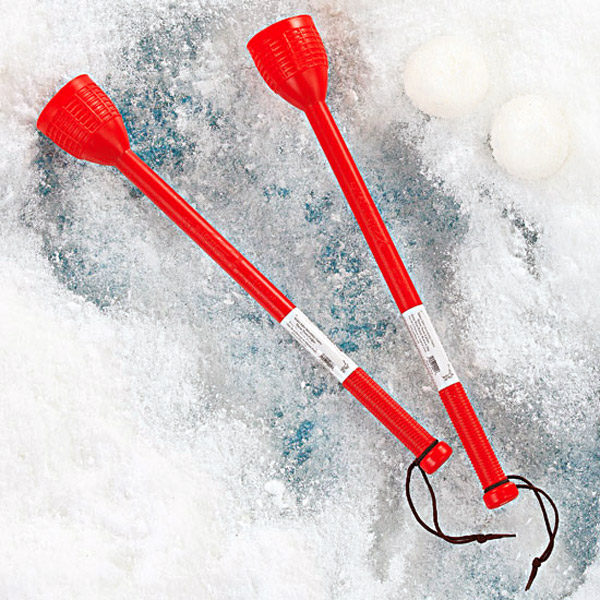 It’s not so much the snowballs I want to talk about, it’s more, it’s… ok so here’s what happened. My cutie-baby-sweetie-pie-wifey-pooh and I were heading to my parents house for dinner. It’s a monthly ritual we do on the second Sunday of each month. As we were heading out of the neighborhood I saw a group of kids with these little plastic devices in their hands. They looked like plastic sticks with a cup at the end. Then I saw the kids sticking the cup end in the snow and then they’d wield the stick as if they were about to throw it at their friends. They would stop at the last second, still holding the stick, but the packed snow in the cup would fly out of it towards on of the other kids.

Yep, it was a damn snowball making and dispensing weapon of mass destruction… or snowballing, and it’s probably only minor snowballing at that. “Those lazy little buggers!” was the first thing out of my mouth. My cutie-baby-sweetie-pie-wifey-pooh looked over to see what I was referring to and laughed.

I mean sure, hooray for progression (insert waving flag here), but, well, I’m not sure if I was bothered by this because those kids were missing out on a key part of the growing up in a snow visited climate experience, which is making snowballs by hand. Then again maybe it was because I never had the option of having one of those while growing up, and the memory of the many evenings of painfully numb fingers being warmed by the fire because of day long snowball fights left me a little bitter. Regardless the reason, it just wasn’t fair… stupid cheap plastic snowball maker things.

This did get me thinking about the whole, “When I was a kid…” train of though. Problem with that train is that eventually you are going to derail and end up taking out a small plastic building in the process, or maybe falling on your keys. Either way there chance you might need a band-aid at the end is pretty high, or at the very least, a nap.

I started thinking about a spoken word piece by Ernie Cline I had heard a few years back that takes on this whole “When I was a kid” topic, but from my generations point of view. I hope you like it… enjoy.

Take it away Ernie… Actually wait a second Ernie. I think I should point out that this piece does contain some NSFW language in it, unless your a sailor. So if you are of the disposition you might want to have your kids, or your grandparents that do not have an appreciation for tourettes language, follow the Storm Troopers example, namely the one in the back. Also, if you have an abrasion to colorful metaphors, you might want to skip it yourself. Ok, so now you can take it away Ernie!

Ahh, bugger, there’s no video of Ernie performing this piece himself, just some poser putz. Ok actually click here to go to his site and listen to an audit recording of this piece. It’s even written out as well so you can follow along, if you want too.

I’ve come to the conclusion that the little snowball maker sticks can fall into obscurity, along with really thick florescent yellow shoe laces, and Bill & Ted’s Excellent Cereal. I don’t care, and it has nothing to do with asking one of the neighbor kids if I could borrow his snowball maker for a minute to try and him saying no… I’m still going to call his mother. No, it was the realization that I was outside in the bloody snow attempting to research the equivalent of a Texas sized ball and cup game without the damn string.

Lesson learned, I hope, because I’m not going out to play in the snow again.

All snow related things put aside, I just wanted to say today is going to be a fabulous day! Sure it sounds a little Doctor Seussian, which only makes today that much better, but I am going to see some RiffTrax tonight, at a theater! I you have the time and are in a location with a theater that this even is being streamed to, go check it out. It should be brilliant. I’ll let you know what I though about it tomorrow.

What are some products out there that you have seen that are making the young people of today more lazy?