by Richard Timothy | Feb 8, 2012 | Non-Fiction, Observationally Speaking, Remembering Your Youth, When I Was a Kid | 0 comments 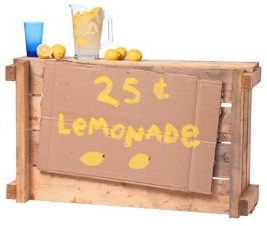 So yesterday when I got home from work there was a collection of little people hanging out in the front yard of my next door neighbor, which is where the mailboxes are for 10-15 houses in the area. Initially I figured it was a play date that turned in to a play party, but as I walked up to my mailbox to collect the day’s mail, I was confronted by six little kids asking me if I’d like to purchase a glass of chocolate milk for a dollar. I told them I didn’t drink chocolate milk, to which they retorted, “What about . . . show him the sheet!”

Written on a piece of white printer paper was a list of four items each with a price listed next to them. I settled on an order of peanut butter crackers for 50 cents and told them I needed to go get them some cash, taking my mail with me. When I returned with my two quarters one little girl, who missing a front tooth, held up a small glass jar that was holding a few dollars in it, and smiled widely as I dropped my quarters in. The girl said that the others were inside getting my snack.

I stood by my mailbox, waiting. The girl with the cash jar ran to the front door of the house and opened it a crack and yelled something inside. I continued to stand there and after about a minute awkwardly checked my wrist to see the time . . . I wasn’t wearing a watch. Then I pulled out my keys and just as I was about to open my empty mailbox, just to make sure it was still empty, out walked three kids, each holding one part of my order in the open palm of their hand. 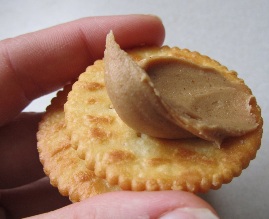 “We made you three,” said one little kid with a nose full of freckles. The girl with the jar of cash confirmed that I had paid and then the three kids placed my peanut butter crackers in the palm of my hand and thanked me. They were homemade, a wheat Ritz cracker was the base and on top was a hefty dollop of peanut butter. I smiled, wished them luck and walked back home. As I walked into the house from the garage, the first thing I did was head into the kitchen and let all three crackers slide off my hand and into the trash.

What? Little kids can be filthy little things, and I didn’t know any of them. No reason to risk it. Besides they had their money and I did wait until they couldn’t see me before throwing away their questionable culinary treat. The whole experience did get me back to thinking about the series I was working on last month, the things we all did as kids. So, with all Utah bagpipers at peace now that Regan has left the state, this Smirk will give use one more to add to the list of remembering your youth, and today’s focus . . . the light switch.

There were a number of things that happened when I was finally tall enough to reach the light switch, and when I refer to a light switch I am referring to the traditional up/on, down/ off light switches and not lights connected to The Clapper, or those round knobs that you press to turn on and off and turn to control the brightness of the bulbs, or those little up/down or left/right slider switches. The first thing I did when I finally realized I could reach the light switch was make sure that there were as many light on in the house as possible. This was because at that age it is a proven fact (in my mind) that monsters cannot survive in the light, therefore the more lights that were on the few monsters there would be in my house.

Eventually, I learned that the light switch was my connection to an instant strobe light! I’d turn on some Asia or Foreigner and as my friends/siblings danced, I’d flip the lights on as off as fast as I could, until it was my turn to dance and someone else’s turn to strobe for us. I killed more light bulbs with than little trick than Michael Jackson had hit singles, and yes I am including his time singing with his brothers.

Then along came the practice of centering. You know, the practice of carefully adjusting the switch so that it was perfectly centered between the on and off positions, pointing straight out from the switch. In this state the switch was incredibly unstable, and in some instances a sneeze or a knock on the door, or a heavy step could cause the switch to spring to one of its official working positions. Statistically speaking fifty percent of the time the switch would commit to the “off” position instead of the “on” position, thus making this one of the most pointless forms of booby trapping the house possible. 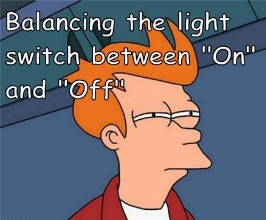 So why try? I’m not sure why others did this, but for me it was because of that one time! I had set the balanced the switch and while standing in my room, alone, I exclaimed, “I have an idea!” and I stomped my foot down, while lifting my hand up into the air with my index finger pointing out. The vibration motivated the switch to jump toward the “on” position the light bulb above my head lit up. It was a perfect child moment and worth repeating as many times as needed to prove to just one other living person that it really did happen and was as hysterical and I was convinced it was. And when I did finally get it to happen again, the fact that I had to jump up and down four or five times before the light switched on did lessen the overall comical effect I was expecting.

There are those random moments where I’ll still find myself handling a light switch getting it to settle perfectly balanced between on and off, and even though I know it’s pointless, it’s an accomplishment and occasionally it’s the little accomplishments that help us prepare for the bigger ones. Besides, sometimes it takes a little jumping up and down for the lights to turn on, but when they do, it’s brilliant!