by Richard Timothy | May 17, 2011 | I Think There's a Point, Non-Fiction, Observationally Speaking | 0 comments 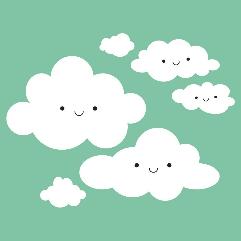 Today’s Smirk is brought you by one of my higher educational facilities from my art school days. At this point in my life I was on the path to becoming an artist, as in fine art, painting, drawing, pottery, things like that. So why am I not an artist now, simple, I wasn’t terribly good at it, I wasn’t terribly bad either, but that’s the nice thing about art it is possible to make a career out of producing art that is not terribly good, and in some cases is quite awful. There are a number of great artists out there, and as I was about to get a degree in this field of creativity I realized that I wasn’t terribly interested in trying to achieve greatness in the art world. Still, it didn’t stop me from getting my art degree.

The thing about being an art student is that I got to spend four hours a week looking at and drawing naked people. Usually it’s the men that go, “Oh, well that explains it,” but let me explain this constant little failure of realization when the words “art”, “drawing” and “naked people” are introduced to a sentence… you don’t get to choose your models, and in a small two year college in northern Wyoming you took whoever was willing to model for $10 an hour, which for the first half of the first semester meant Floyd the 65 year old retired guy who didn’t really need the money, but was bored ever since he retired and thought it was a nice way to meet new people.

Once you get past the initial “I’m drawing a naked person” novelty, which in most cases lasts about a minute, the exercise of drawing does become your focus. Sure when a new model shows up there is always a hint of excitement, but it was the exact same excitement I got when I would get to class where we were painting the same bowl of fruit for a week and I realized that instead of that same damn green apple, someone had replaced it with an orange. It just meant that I got to draw something a little different, and in class it was the variety is what you began to look forward to. 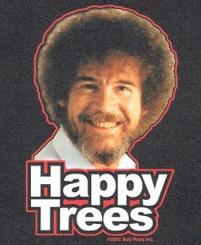 The funny thing is that I had no intention of bringing up naked people in any why when I started writing this… ah such is the joy of creative artistic license. It’s just that I remember this one class in particular my last year at school there, make that one teach in particular and it was all thanks to a couple of puffy happy clouds that happened to catch eye of my professor. First off, no, my painting instructor was not Bob Ross, but for the record I would have loved it if it had been. There is something about watching old Bob Ross reruns on PBS that brings a smile to my face, a calmness to my core, and a cure for any insomnia that anyone is capable of suffering from.

It was during my drive home from work today that I noticed some clouds clouds in the sky, which has a tendency to bring me back to that memorable afternoon all those years ago. My painting class was two hours long right after lunch twice a week. On this specific occasion we were half way through the class. As each person painted away, our professor started walking around the room to check on how everyone was doing. As he did so he was soon filled with the need to lecture about some metaphysical art is life tangent that he loved to talk about to impressionable young artists. He did this a lot, and as students we learned that when this tangent started, we would stop what we were doing and listen quietly until he was done, or until the class ended for the day. It was always a tossup once he started up.

On this particular afternoon our professor was a touch, well… I refuse to say that my art teacher smoked any glaucoma clearing medications. For the record I never witnessed him partaking in any illegal substances, however I do feel it pertinent to add for the sake of this story that in my opinion his behavior from time to time seemed somewhat in congruency with the behavior of someone who enjoyed seasoning his life with a certain natural herb that can be used in California for back pain… as long as you find a doctor that supports your willingness to support smoking pot… for “medical” reasons of course. 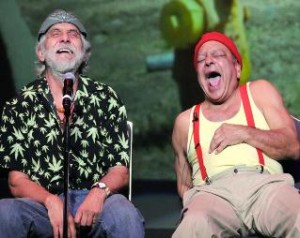 On this particular day, let’s just say the questionable behavior was being laid on a bit thick, and by a bit thick I mean he could have been a character in a Cheech and Chong film. I was already starting to smile as he perused through the classroom commenting on the vivid colors in one students painting, and the movements of the lines in another’s painting. Soon he was calling for everyone to stop painting and to listen to him for a minute.

As art tangent began I was finding it rather difficult to keep a straight face. Then, as another student leaned over and whispered in my ear, “Is he high?” my first laugh escaped. A roomful of eyes all focused on me and our teacher stopped talking a moment to follow everyone else’s gaze to me. He was grinning from ear to ear, “What?” was all he could manage. All I could come up with was, “Nothing, art just makes me happy is all.” The teacher got a big smile on his face as if he was a little surprised that there was someone else who felt the same way him did about art and replied joyously, “Me too!” This got a laugh from the entire class, and now with a class room full of students with a case of the giggles he carried on his art tangent. 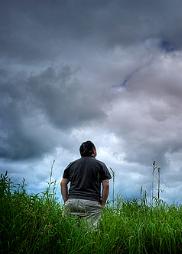 Then as he was in the middle of going on about capturing the essence of art in every piece of art you do and the importance of painting what you see, his eye wandered out of one of the small windows along the only wall in the studio that had any windows. They were very important because they “let in natural sunlight in” when we would paint. His eyes stopped and focused on a small group of clouds hanging out in the sky, neatly framed by one of the windows. This is what I remember him saying when this happened, “… so the essence of art is capturing what you… woah, look at those clouds. They’re amazing, so puffy and… and happy. I wish we could go out and just capture them right now.”

“Ok!” I yelled out as I gabbed my sketchbook and headed ran out the nearest door, which lead right outside. It was all I could think to do to cover up the fact that I had lost it at this point. I remember seeing the professors eyes get really big as complete surprise filled his entire face as I looked behind me as I headed out the door. I laughed for a good three or four minutes, trying to get it out of my system before heading back into class. As I walked back it, my teacher started laughing happily as he walked up to me and put his arm around me, “I didn’t mean right now,” he chuckled. “Ohhh,” I replied. He laughed again and exclaimed to the whole class, “You’ve got to be so careful what you say around this guy,” and laughed some more. A few moments later the bell rang and class was over, everyone laughing to themselves as they put away their paintings for the day all of us smiling at the performance we witnessed that afternoon.

Shortly after, it became a bit of a daily bet between some of the students on whether or not he would show up at class that discombobulated again, come graduation he still hadn’t. Not to say he never came to class acting that way again, just not acting that way as strongly as he did on “Puffy Happy Cloud” day. It was by far his most notable performance. I was never disappointed by his lack of a repeat performance, it seemed mute in retrospect, besides he had given me one of my most memorable art school moments and I’ve never looked at puffy happy clouds the same way since. Thanks teach.