Profanity-lite – All the same meanings, but with none of the guilt. 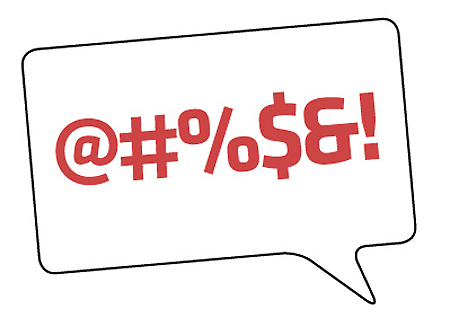 What makes profanity, profanity? According to Dictionary.com profanity is 1) the quality of being profane; irreverence. 2) profane conduct or language; a profane act or utterance. 3) obscenity.

One of the things I appreciate about profanity is how it changes from culture to culture. In some countries there are certain words that are considered highly profane, but in different parts of the world the words are considered funny sounding and that’s about it, and if you don’t know what I mean, well, bugger it!

Personally, I’m a big fan of profanity. It’s very versatile and descriptive, and it can be very effective in creating elements of shock, surprise, anger, joy and humor. It is brilliantly emotionally driven and they can be used to cover the entire array of emotions. Besides, there are certain combinations that are perfect for stress release or for inducing laughter.

It seems to me that there are two key American institutions that seem to have a certain abrasion to the used of profanity in their specific environments, those environments being the religious world and the business world. Case and point, the video below is a prime example of what is not acceptable in the business world.

Say what you will, but that video makes me laugh every time. The dearly missed George Carlin did a piece related to the profanity subject. He called it, “Seven Words You Can Never Say on Television“, which, if you ask most people in the religious and business world would consider these to be profane words as well.

All that being said, having lived in Utah for 10+ years now, I’ve been introduced and conditioned to the phenomenon that I like to call profanity-lite (aka guilt free profanity). It’s the practice of redefining certain words so that they evolve into the sound, emphasis, use, versatility, and replacement of what is traditional profanity. Here is what I mean:

There has been the recent additions of texting profanity, which is the newest use for guilt free profanity in verbal conversation. The common uses I’ve heard are OMG, LMAO, PITA, and WTF.

Now I have, on occasion, used these guilt free profanities in situations that would probably result in getting slapped, or having a band of mothers with small children start crying because I was, “polluting their young angel’s virgin minds and ears.” When we all know the little whipper snappers have already learned those words from their old man, or maybe a grandparent that accidentally dropped a dish, or the very least the other kids at school, or cable, or… hell they can pick it up everywhere. Case and point…

[youtube=http://www.youtube.com/watch?v=a_zK2apRHI4]
(If the video does not play click here.)

What makes me happy about all this is that you have a culture of people who are openly opposed to profanity, but at the same time have invested the time and energy to invent profanity-lite. Yep, all the exact same meaning, uses and emphasis of traditional profanity, but without all the guilt. It’s sneaky, clever, and still profanity.

Try to call it whatever you want, or justify it however you see fit, but its use is the very definition of profanity. The word might be masked, but the meaning is the same. Is it hypocrisy? Some say no, some say yes. I choose to call it evolution. Language evolves everyday, and who knows, maybe someday in a not so distant future calling someone a “wiseass” will be the equivalent of saying they are knowledgeable when it comes to the democratic process, and calling someone “snoogums” will be the equivalent of suggesting that the person violates small woodland creatures using pudding pops, Crisco, and bubble gum.

Have a great freaking day!