Primping for the 4th, Unintentional 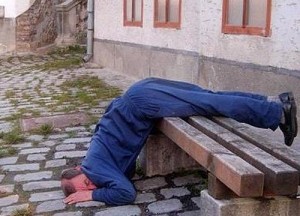 You know how sometimes you’ll make a statement that you were in full support of, but then find yourself in a situation where that previous statement becomes null and void. I think the most common example of this is the morning after a night dedicated to the mass consumption of alcohol. I had a roommate that would wake up at least twice a week and mutter, “I’m never drinking again.” Usually it just took offering him two aspirin with a can of beer to wash it down to change his mind, but every once in a while he meant it for at least a day.

Well, yesterday I found myself it this type of situation, except without the hangover, or the night of drinking, or the alcohol, or . . . okay it had nothing to do with that type of situation. See, in a past Smirk I talked about my first and only experience getting a pedicure. I had no plans on ever going through that experience again . . . at least that was the plan until my sweetie-baby-cutie-wifey-pooh felt compelled to get one yesterday as part of her birthday—and well, umm . . . so maybe my toenails are now blue and have glitter on them, but in my defense it was her birthday.

It wasn’t as painful as last time, which was about 5 years ago, and that was a definite plus. For the record though, I am never doing this again . . . you know, unless it’s my sweeties birthday, or I lose a bet or something. 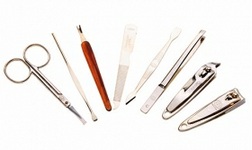 This experience was very different from last time for a few reasons. First, I was not at a beauty school being worked on by some shy girl that was clearly not keen on poking, prodding, picking, clipping, and rubbing my feet. This time it was a place in the mall and was staffed by Asian women who spoke in broken English.

The lady that worked on my feet made up her mind what my toenails were going to look like even though Angela and I had mentioned at the beginning that we wanted matching colored toenails. Oh no, purple toenails were not acceptable for my toes and my “toe lady” (I’m not sure of the correct term to use here) informed me repeatedly while working on my toes that I needed to get fireworks painted on my big toenails.

When the time came for me to get them colored, the lady working on Angela’s toes was using the purple nail polish that I was expecting to be used to paint my toes. Instead of waiting my “toe lady” went to the wall of colors and grabbed the bottle of blue fingernail polish that she wanted to use for my toes, and a bottle of glitter polish.

When she came back she held out the blue and informed me, “You get this color.” She then sat down and got to work painting my toes. Then she asked me again while nodding her head up and down in a no so subtle attempt at Jedi mind control, “You want firework?” 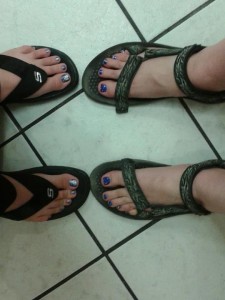 She clearly had her heart set on painting a scene of fireworks exploding in the night’s sky. I figured, why the hell not, gave up and conceded to her “suggestion”.

As she started painting the scene on my toes, exclaiming, “See, I told you, firework beautiful!” the stranger sitting to my left finally lost her cool and started giggling. This in turn got Angela and I laughing as well.

My toes are now ready to celebrate the 4th of July. I haven’t felt this patriotic about the holiday in years. Who knew that getting theme nail polish would help out with that?

I love my wife and was happy to get my toes done with her in celebration of her birthday. I just hope she never has the urge to do an impromptu legs waxing one of these years.