Playing Dress Up, We all do it.

Let’s talk about fans and that extreme fans can come across as rather odd ducks based on the genre of you fanitude… fanisim… fan something. The genre you choose to be a fan of (there, I got it). So today I’ve decided to go for the obvious comparison namely when it comes to being an extreme fan.

In short, this guy 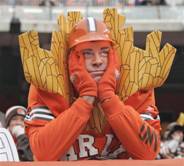 is the same as this guy

are the same as these guys

And then you have this guy

who is either confused or just an new hybrid that decided to combine the two (I’m still trying to figure it out).

I like to call these the dress up fans, and the way I see it there is no difference between a sports fan that dresses up for a game, a Harry Potter fan dressing up to go to opening night of a new Potter film, Star Trek fans dressing up for conventions, or a drag queen to dressing up like, well a drag queen, to go to a pride parade. You are all the same… well in regards to playing dress up anyway. Call it what you will, but the facts are this, you are playing dress up. Its ok though, just look at parades all over the world with all these people in “authentic traditional dress,” know what that means, they are wearing a costume, which means they are playing dress up.

I’m also going to point out that if you are a Cowboys fan wearing a Cowboys jersey and you see someone wearing a Captain Kirk tee shirt and choose to call him a dork, well you sir are not only a hypocrite but just as big of a “dork,” actually you’re a bigger dork because you can’t even see that you are dressed the same as them. This does work both ways you know. To all you people that choose to spend Friday night playing Halo 3 with your friends and saying that everyone going to the “big game” that night is lame… you sirs are hypocrites and even lamer than the sports fans because you are making fun of people that are just like you.

Look, I know all about being dorky. I use to go to elementary school wearing parachute pants caring a supersized piece of rolled up cardboard, just so I could practice break dancing during recess. Do I still do that? No, partially because I’m no longer 11 and couldn’t even begin to care about break dancing, and mainly because I discovered slow dancing with girls was a lot more fun and rewarding, and it doesn’t screw up your knees.

I’m a big fan of people being different, having different passions, speaking different languages, experiencing different cultures, eating different foods, and looking at someone with bright purple hair and telling them how nice it looks, because it really does. One of the things I enjoy most about the world is that being different is one of the main things that makes us all the same. My only grumble is when people have to hurt others because of the refusal to see past their differences to see how alike they are. Case and point, when people who share a same common interest and passion, say playing dress up, feel a need to berate and even physically hurt people because even though the act (playing dress up) is the same, the genre is different.

Now please excuse me while I go put on my Spiderman pajamas and play Madden NFL 10 on my Xbox, while I listen to the Dodgers and Phillies game, and I wait for my friends to get here so we can play D&D until 2AM.