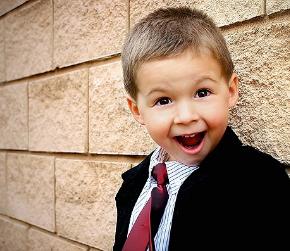 In the spirit of yesterday’s Smirk I felt compelled to share this little story about an experience a friend of mine had with his youngest a while back, and by while back I mean anywhere from 6 months ago to 2 years ago. Out of respect for my friend, I will omit the names of him and his family members, unless of course he chooses to out himself in the comments.

It was during the school season and the weather was beginning to turn a bit brisk. His wife had to go to the university early that morning to take a test and it was his responsibility to get the kids ready for school. His oldest, I capable and self sufficient lad, made the process of getting ready for school a rather pleasant one. Then there was the youngest, which I’ll call Ben. Ben is the definition of the Yin and Yang… better make that an adorable sociopath. He is an angelic looking little boy with a fiery personality that is in such opposition to his innocent appearance that world domination will be no problem for this child over the next two to four years.

So as my friend is trying to get Ben ready for school he’s met by a brick wall of assistance, the kid is refusing to help. My friend’s frustration begins to grow as the arrival time of the school bus gets closer and closer. With only minutes to spare Ben is finally ready… until he asks for his coat. As the prospect of taking his kid to school starts to look more and more like a probability, and not being terribly fond of this possible outcome my friend slips out with, “Where the f*** is your coat?”

Ben stops all of his disruptive and unhelpful behavior, and with eyes full of surprise and concern looks up at his father and says, “You can’t use that word. That’s mom’s word. Only she can use it.”

All his frustration towards Ben melted away in that instant. He smiled, doing his best to keep from laughing, and replied, “You’re right. That is mommy’s word. I’m sorry. Now let’s find your coat bud.”

Ben nods in acceptance of the apology and in a sudden surge of teamwork runs to where his coat is hiding, puts in on and heads out the door and off towards the bus stop. Arriving right as the bus pulls up.

I’m not saying swear at your kids, fact is if you swear the kids will pick it up, they’ll just make sure that they, like you, only use it around their friends or when they think you’re not around. “Mom’s word”… ha! What a grand way to keep the little ones from getting expelled for language… at least until get they to high school. Truly one of most brilliant little people stories I’ve had the privilege of hearing and sharing. Thanks Ben for knowing the rules about “Mom’s word” and thanks Ben’s dad for sharing it.