It’s Saturday, well it was when I started writing this. It’s supposed to be my relaxed and groovy day. You know, it’s the type of day that doesn’t require you to put on any pants until at least noon. So, I rolled out of bed around 9:30 with exceptional bed head I might add. And I don’t mean the “I’m ready to go clubbing” bed head, oh no, I’m talking about the traditional “Einstein’s my bitch” style of bed head. If fact, my hair was so unmatched that I was contemplating doing a round of two of physics this morning, simply because it just felt right.

Turns out it was the hair talking, because I don’t do physics, ever… well almost ever. The only exception is when my friend Clayton is over, and happens to be mildly to highly intoxicated. I met him years ago while he was working on his PHD in physics and let’s just say that once that boy gets lit, drinking and deriving is one of his highly endearing qualities.

I keep telling him he should go back to teaching and hold his classes in a local pub, speakeasy, bar, or any place close to campus that serves alcohol, except maybe frat houses. I think he would have the best attended class on campus. Hell, I’d even consider going back to school just to take his class. Although I’m not really sure how well anyone would do during finals. Still, I can’t imagine anyone would complain about having to take the class again.

So, anyway, back to my Saturday morning. I had just finished cooking up an omelet and was heading downstairs to enjoy a little MST’d Santa Claus Conquers the Martians, because it is that time of year. As I was humming the “Let’s have a Patrick Swayze Christmas” song to myself, and my cutie-baby-sweetie-pie’s phone rings. After the call she tells me that some people are coming over to get a little marketing assistance from her and there is a good change that they are going to bring their kids. Oh and they were going to be there in about twenty minutes.

The first thing I though was “sonofabitch” because this meant I was going to have to put on some pants. My second thought was. “Oh god, kids!” Look its not that I hate kids, some are very tasty with a side of hollandaise sauce. Its just that I, well, based on my experience, there are a lot more horrible children being produced than good children and based on the law of averages, our house was going to be invaded by the result of someone’s demonic seed.

Don’t get me wrong, I am a strong supporter of the equation, horrible children = horrible parents, but I think it is important to point out that being a horrible parent does not mean you are a horrible person. You just really should have used protection, got fixed, or put the little creatures up for adoption.

Also, I’m not referring to all parents here. My parents, for two, kicked ass. I have friends who have done a remarkable job raising their kids. They are well behaved, polite, know how to actually say please and thank you without being told to do so, and in my opinion deserve everything they asked Santa to give them this holiday. 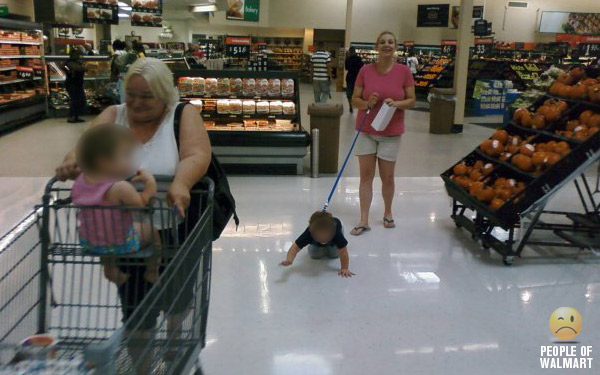 What I am referring to are the parents that have predominantly checked out when it comes to their children, or the ones that adhere to the “reprimand with love” form of child rearing. They are easy to spot too, go to any Wal-Mart and you’ll see them everywhere. I’m not sure why but Wal-Mart wildlife reserve for awful children and their parents. The child (or children) is easy to spot, it’s crying loudly while their parent(s) just walks along completely detached and ignoring the fountain of tears, snot, screams, and spit.

Now sure, some people might say that because I don’t have any children, I have no right telling others how to raise theirs. My response to this is a resounding, “RUBBISH!” Hell, states have entire taskforces designed to tell parents how to raise their kids. Based on that fact alone I feel more than qualified giving my opinions on the topic. Not to mention, having been a child at some point in my life, I feel perfectly justified talking about the raising of them.

First and foremost, stop rewarding your kids for bad behavior. I see it all time. Some whiney little kid asks for a new toy. They are told no, so they start crying, and crying, and screaming and the parent either gets embarrassed, or simply gives up and rewards the tantrum with exactly what the child wanted. Well done. You just confirmed to your child that bad behavior is the best way for them to get what they want. Congratulations, you are well on your way to raising a little bastard.

Also, if your kid is misbehaving, slap it on the butt. It lets the kid know that their behavior is unacceptable. Think about it, if you cater to the “reprimand with love” mentality you are training your child to act horribly when they want you to hug and kiss them and show them positive affection. This is a horrible parenting philosophy.

I’m not saying you should beat your child. There is a huge difference between a smack on the butt and punching a kid in the face for behaving badly. That is the type of behavior that gets that taskforce called on you that I mentioned earlier, and deservedly so.

It is that simple? I think so… mostly anyway. Dr. Spock might disagree, but what does he know. Being one that has never read his book, I’m pretty sure he made most of it up.

I was going to go through a number of examples of crappy parenting I’ve personally witnessed, but this post is already at risk of turning epic, so I’ll throw those examples in tomorrows post and call it part two.

So until then, to all you good parents, thank you. I really do notice and truly appreciate it. And to all you crap parents, knock it off! You know who you are.