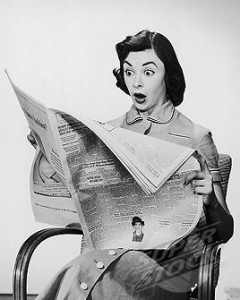 Every now and again I’ll find a news story that puts a smile on my face, something that is clearly smirk inspiring and worth sharing. So for today’s Smirk I thought I’d share a story of an alligator, lurking in a Kansas suburb, spotted by kids, reported by parents and confronted by the police. In the end a few shots were fired, and the gator remains at large, just not as large as he was before the shots were fired.

When I think of the word gator a few things come to mind. The first is the much expressed hate for Gators fans in the film Big Trouble, based on the Dave Barry’s first novel. The second thing that comes to mind is the saying the every American learns at some point in their youth and is said every chance they get for a two week period during the period in grade school that you first learn it. The saying of course is, “See you later alligator. After a while crocodile.” Ah the joys of an easily entertained youth.

This story takes place in a Kansas City suburb, which I have seen! Ok so I probably haven’t seen this specific Kansas City suburb, but did spend a week in Kansas City once a decade or so ago, so at least I do know what a Kansas City suburb looks like. Here is what I remember most about that trip, going to a River Boat casino and spending $20 on the slots, walking out with $18 in change (every I won I put the winnings in my left pocket, when $20 in my right pocket was gone, I was done gambling). I remember watch the play Forever Plaid with a bunch of old people that knew all the songs. I remember going to the dog tracks and winning $12 on some funny named dog that my friend said would never win. And I remember staying up until 3AM every night watching MST3K. All in all, a pretty damn good trip… thanks again Ryan. I will, however, state for the record that I did not see any gators while I was visiting. 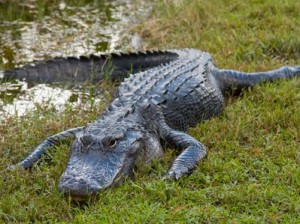 This story comes begins with an evening call to the local police department from a parent in a Kansas City suburb, on the Missouri side. The caller reported that an alligator had been spotted, by his children, in some weeds close to a nearby pond. The police were dispatched right away, but by the time the police arrived it was starting to get dark limiting their visibility. The gator was still in the area that it had been spotted and the police were advised by a conservation agent to kill the gator if the police felt it posed a threat. Now I don’t know about you, but if there was a local pond that the neighborhood kids played by and/or in, and an alligator was discovered hiding in the brush close by, I’d probably consider that a bit of a threat… turned out the police agreed. 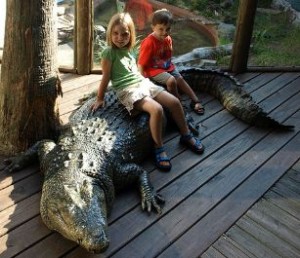 It was after the second shot to the gators head with no reaction whatsoever from the giant lizard that the policed ventured a bit closer. It was then that they realized that the gator was a fake. The owner of the property told the police that the fake gator with installed to keep people off his property. At this point all I can do is picture some crotchety old man in overalls, sitting in a rocking chair on his front porch with a tall glass of lemonade in one hand, a shotgun with rock salt shells in the other hand and a bottle of whiskey sitting next to him to help bring out the flavor of the lemonade, all the while yelling at all those damn kids to get off his lawn.

I’m guessing the owner was a little bothered that the police had opted to take pot shots at his devious lawn ornament, to which the officers replied that a no-trespassing sign would have been a wiser way to encourage people to stay off his land. I would that if the owner is immensely fond of his fake lawn scare toy that cosmetic surgery for the chipped gator will be scheduled for later this month. And there you have it; the true story about a fake gator who took two real shots to his fake head by the real local police to stop a fake lurking menace that looked real.