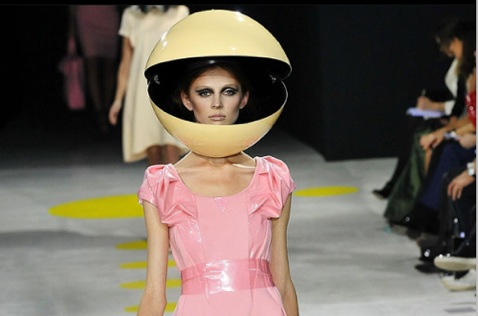 Pardon me while I climb on top of my soap box for today’s post. This time I’m here to talk about fashion!

Fashion… its, umm… its… ok seriously, what the hell is she wearing? If there ever was an image that encompassed the acronym “WTF” that picture would be in the top 5. Anyway, when I think of fashion I think of it as an industry synonymous with deceit, lying, and oxen defecation. I mean let’s face it the fashion industry has done more to promote anorexia and bulimia than any other industry out there. Have we learned nothing from Karen?

I do believe that fashion is predominantly nothing more that visual vomit splashed on a piece of cloth and made into an article of clothing that the creator expects people to pay a price that even a used car salesman, charging 15% over blue book, would consider a bit steep. Yeah, it might be a touch harsh, but in my defense I did grow up in the 70’s, 80’s and 90’s, so I do feel quite justified bad mouthing the fashion industry.

It’s not that I don’t understand fashion, I do get it. In fact I am a big fan of such classics as Levi’s, Doc Martens and cotton tee’s. But that’s just it, for every truly brilliant creation the fashion industry has given the world, there are some 17 million “good ideas at the time” that cause humanity to hang their heads in shame. Then to add insult to injury every 10 years or so the fashion industry, being devoid of the ability to actually create something new, attempts to rehash a bunch of old failed ideas in hopes that the new and upcoming younger generation will not know any better and think they are being “retro” and cool. Poor buggers never had a chance.

Granted there are some styles that were so bad that I’m not sure they can ever be brought back as a tangible “retro” or “back in” fashion. Case and point… parachute pants. They will forever stay in obscurity as the truly bad idea they were and still are. Anyone that actually wore them and thought they were cool will make sure of that. So kids, trust me when I tell you, never, ever, ever, EVER purchase, borrow, try on, or even go into a store that is selling parachute pants. Stay away from them at all costs.

Oddly, there are pack rats out there, which for some odd reason held on to a pair of these pants. Occasionally they will pull them out of storage for either Halloween or the random, yet always plucky, 80’s themed party, which I’m always game for. Say what you will, but going to an 80’s themed parties is a great way to take part in some cheep, yet useful, group therapy. 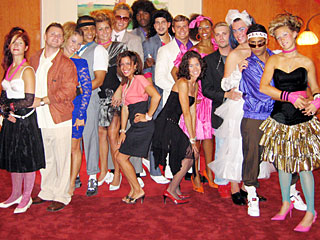 You bring some alcohol to share with friends and everyone dresses up in an outfit that they loved back in the day. Everyone laughs at each other, and then everyone cries, letting go of the built up shame they’d been storing inside for all those years. It’s a great time and a hell of a lot entertaining than actually going to therapy… besides when was the last time you got to enjoy a pint of jungle juice while sitting in your therapist’s office? For me it was… well, I don’t want to talk about it, but let’s just say I was young and in love, and didn’t know any better.

So back to this fashion thing, my wife showed me a video on YouTube the other day that I though was rather brilliant. Dove put it out a few years ago, but it was the first time I’d seen it. I think it’s worth sharing:

To you skeptics, yes, I get that the industry standard is to adjust photo’s so they pass a professionalism standard. Likewise, I accept that Dove caters to that standard and Photoshop’s their ads as well, but some how I doubt it’s on the same level as the video portrays. The thing I appreciate is that they are actually trying to do something to bring beauty back to people and help others build self esteem, instead of stripping it away like I think the fashion industry has consistently done over the past decades.

The fashion industry has made a habit out of defining to us what beauty is, and sometimes we fall into the worse habit of actually believing them. They tell us we are not beautiful unless, of course, we purchase their product or their clothing. But it seems that this is starting to change a little, at least I hope it is. It would seem one company is trying, and I’m sure there are more out there doing the same. So to them, I say thanks, and to you, well I guess my point today is this: Beauty is not about what we wear, but about who we are, which means yes, damn it, you are beautiful.