Dyslexics are Teople Poo, and I can Too . . . or something. 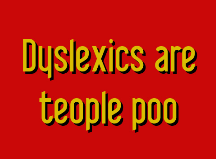 I’ve had plans on writing this Smirk for the past few years. I just never got around to it . . . until now, although it might have had something to do with my last Smirk about being left-handed. While researching leftie statistics I learned that it is more common for left-handed people to be dyslexic than right-handed people. Now, I’m not blaming my dyslexia on my hand preference, but it’s nice to know if I wanted to, I could.

I’m writing about this mainly because . . . well I’m a writer who just so happens to have something that sometimes hinders my relationship with one of the things I love to do. I know that it affects people differently, and for me it’s kind of like a little yappy dog sitting on the sidewalk. I know I can get around it, but the faster attempt to move verses the closer I get it the yappier the thing gets and the more annoying it becomes.

I believe it was George Burns who said, “For me the toughest thing about dyslexia was learning to spell it.” I’m inclined to agree. Seriously, thank . . . whoever it was that came up with spellcheck, because I haven’t spelled dyslexic correctly once since starting this Smirk. Why would you use such a difficult word to describe a condition where people struggle with words and reading? The biggest problem with the word is that it carries with it the stigma of “unintelligent” or “stupid”. There are a lot of dyslexic people that hide in fear from that word, because they think it means they are less than others, and I should know . . . I was one of those people. 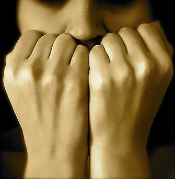 I still remember the sheer terror the anxiety I felt when a teacher would announce that everyone would take a turn reading in class. I missed most of the story because I was too focused on trying to figure out the pattern the teacher was using when asking kids to take a turn. I was always grateful when it was each kid would read one page (or one paragraph), because it would be easy to find my section. On the occasions that I did figure it out, I would jump ahead to my designated page and would spend the whole time reading my page over and over again in my mind. That way when it got to be my turn I could read out loud at a more normal speed and not make as many mistakes. Even in college I had anxiety about reading out loud in class.

I have a rather mild case of dyslexia. I don’t see words or letters upside down or backwards like in more severe cases, so I really have no idea what that experience is like. One think I’ve noticed is that I can read a book held right side up or upside down at about the same speed with the same level of concentration. I do read slowly, very slowly in fact. I believe the technical term for the rate at which I read is “slow as hell”. I do enjoy reading though, and marvel at people that can glance at a paragraph, or even a sentence, just for a moment and have read the entire thing. When I read anything I meticulously pronounce (or try to pronounce) every single word either out loud or in my head.

I like the idea of skimming something to get a basic overview, but for me skimming means that I scan over a paragraph and maybe get one or two words out of it. Then, realizing I have no idea what the paragraph is about, I go back and slowly and meticulously read every single word. This made taking tests a pain in too. I always ran out of time when taking any test, because I had to read each question two or more times to make sure I clearly understood what was being asked. 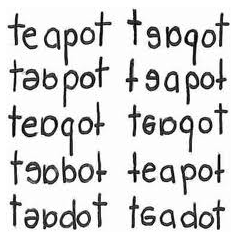 My biggest struggle with dyslexia has to do with certain words, or word sets that always throw me for a loop. My brain simply refuses to make a decision about which word is the correct one. Over the years I have gotten better at spotting them, but even today when I encounter them, my brain slows down drastically while I decipher which word it is I am reading/writing. I still only get them right about 80% of the time (on an average).

Some of these words/word sets include:

It may seem a little odd that someone who has struggled with written words his whole life would have such a love for them and want to spend his life working with them every day. It makes perfect sense to me, but then again I am the dyslexic one here. 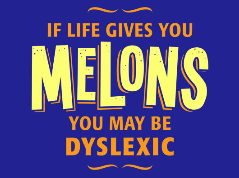 Humor has been a great tool in confronting and accepting my dyslexia. I’m not afraid to laugh at my struggles, and besides there are some pretty clever one-liners that cleverly address the topic, which just so happen to crack me up in the process. Things like the title of this Smirk. Others include:

I’ve invested a lot of time and energy being afraid of people finding out about my deep dark dyslexic secret . . . a lot of wasted time, because what I’ve found out it that the person that cares the most about the fact you have dyslexia is you. 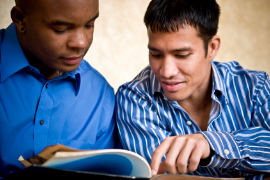 Once I learned to accept myself for who I was, instead of who I wished I was, or who I would never be as good as, it didn’t matter if I didn’t always use the right word, when writing, or that it took me three or four times longer to read a page than others. It was ok that I made mistakes, and if anyone asked I had a reason why I made them. The more I embraced myself, the more I wrote, errors and all, and the more I wrote fewer errors I started to have. Does that mean that I’ll someday write 100% error free? No, and the best part is, I’m perfectly happy that that is the case. It’s who I am. Besides, it doesn’t matter because there are people out there, friends, family, random Facebook acquaintances, even professionals, who will help me out if I ask, and I’m no longer afraid to ask. 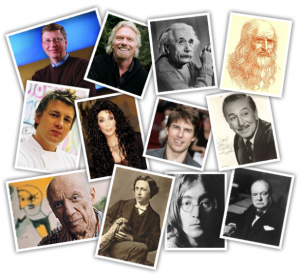 If you are dyslexic (or know someone who is), it’s ok to ask for help, we all need it at times. Don’t be afraid, the fear of people finding out, is more crippling that your dyslexia ever will be. You’re not broken or defective, just wired a little different when it comes to dealing with printed words. And if you’re afraid to accept your dyslexic self, just remember you are not alone. Steve Jobs, Thomas Edison, Erin Brockovich, Pablo Picasso, George Burns, Richard Branson, Hans Christian Andersen, Salma Hayek, Charles Schwab, John Irving, Anthony Hopkins, Albert Einstein, me, and you are just a few of the people who have lived on this planet who have had dyslexia. I don’t know about you, but I’d say we’re in pretty good company.