Disney and the Dark Side 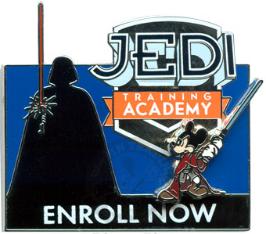 I don’t know about you, but when I think Disney, the first thing that always comes to mind… “Jedi training”. Ok fine, truth is I’ve never connected Jedi’s to Disney in my entire life… that is until yesterday. I came across a little news blurb about an event that happened at the Jedi Training Academy at Disneyland (Tomorrowland) that was just, well, so strong in the force that I couldn’t help but Smirk about it.

So apparently this Jedi Training Academy is a live-action show where volunteers, kids ages 4 to 12, are randomly selected from the audience to become Padawans, aka Jedi’s in training, aka the little ones who have yet to take off the training wheels from their “force” filled bicycle of life. To those Star Wars purists who may feel a twinge of rage as the complete and utter blatant disregard for true Padawan selection, just remember it’s for the kids and it is Disney, so it will never be a true representation of reality… especially when that reality is completely made up. 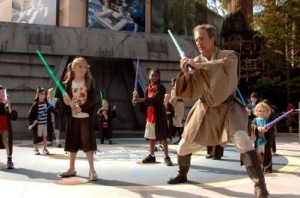 But wait! That’s not all! You also get to stare in amazement as these kids are trained by a “true” Jedi Master in “ancient battle techniques” using their light sabers. Ok, now I’ll admit watching a bunch of little kids run around on stage trying to whack the other Padawans on stage is a plastic light saber just reeks of comedic value… like the four year olds at a dance recital, there is not telling what the outcome will be, but you know you are going to laugh.

So after the getting geared up, after the Oath, and after the light saber training finally comes the conflict, a disturbance in the force. Followed by a cameo by the man in black himself… no, the other man in black, not the original man in black. I just can’t imagine a bunch of 4 to 12 year olds getting all that excited about seeing a Johnny Cash look alike, although for the record I’m pretty sure he could have beaten Vader down. Anyway, so Darth shows up leading a bunch of Stormtroopers. 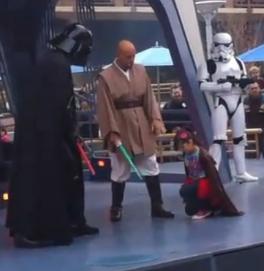 This beings the climax of the show, where one of the newly Oathed and Trained Padawans gets the honor of facing off with the Lord or the Dark Side. Sounds a little daunting doesn’t it? Well earlier this year as the battle was reaching its peak; a young aspiring Padawan Sariah Gallego was selected to battle Darth Vader on the stage in front of everyone. She walked straight up to the intimidating Dark Lord and as they stood face to face, the faithful Padawan dropped to one knee and pledged her allegiance to the Dark Lord. (There is also a video of this exchange available, click here.)

According to the news blurb the young and now former Padawan was then promptly escorted off stage. I can only hope she kept yelling, “Die you rebel scum!” as she was pulled off stage. Ah, there is nothing like placing an unscripted child into a controlled Disney environment to give you a nice refreshing splash of reality. Personally, I think the force is really rather strong with that one.