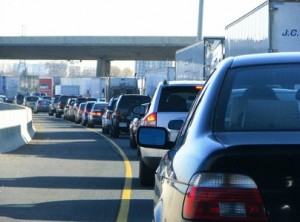 A Speedy Thank You

As a commuter I spend a lot of time in my car, at least an hour a day, which for commuting really isn’t that bad at all when compared to some people I know. This preferred method of getting myself to work and from each day has allowed me to observe an awful lot of driving, and a lot of awful driving. One of the most memorable acts or unrelenting stupidity I was the witness to was a driver who decided to get onto the freeway while at a stop light and being three lanes away from the freeway entrance turning lane.

The set up looked like this, there were two turning lanes full of traffic, then three lanes of regular traffic. We were all under the guidance of the sane driving practice that once the light turned green we would all be staying in our lane and driving forward. I was even the first car in the second lane of forward moving traffic, so I was sure to be extra attentive so that I started off right as the light turned so as to not piss off any of the people waiting for their turn to go. Some people get very touchy when people to not begin moving the second the light changes color.

The turning lane lights were the first to go from red to green. Per standard practice, we all waited patiently for the lights ahead of us to give us the friendly green go ahead. Well, as the lights changed from green to yellow, the person to my right, the furthest lane from the turning lanes decided it was their turn to go and takes off, cutting across all three lanes and into the turning lane just as the forward traffic lights changed from red to green. I think everyone was so dumbfounded by the level of stupidity they had just witnessed that everyone forgot to honk their horns in disapproving unity.

Crazy drivers, however, are not what I want to Smirk about today. I was thinking about this the other night, about the ways we thank others for being chivalrous when sharing the road. And the most common act of automotive chivalry is that of letting someone merge into traffic ahead of you when the roads are packed.

We all know how it goes, you are heading home from some event, be it work, or a sporting event, or a concert, etc. and you are struck with the sudden urge to consume a pretend milkshake. You pull out of traffic make your way through the drive-thru of some fast food place, which is right on the main road. You are now stuck with the predicament of how to get out of the drive-thru and back into traffic. Eventually someone will notice your predicament and in an act of automotive chivalry will slow down and offer to let you in front of them. 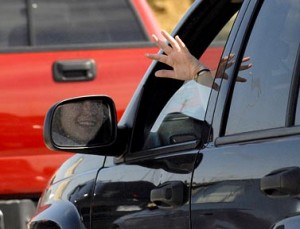 You wave to this person vigorously to show your intense gratitude and for a split second consider writing down their license plate so that you can look them up on the DMV website to find their address so you can send them a thank you note. Then you realize how creepy that sounds and do your best to pretend that you have never ever thought of doing that, ever … and I never have.

Now in my youth, the problem I had at this point is that I wanted to show my gratitude to this kind person for letting me in. The only thing I could come up with was an intense urge to go as fast as I could in an attempt to prove to the stranger that they would not regret letting me in front of them. On one occasion I remember thinking to myself, “Don’t you worry little silver sports car man, I won’t let you down!” and I didn’t. Thankfully I didn’t get pulled over for speeding either.

As I’ve gotten older what I’ve come realize is that most aged folk don’t care if you drive fast after we let you in front of us. Usually we do it to be polite and as a way of apologizing to everyone who has ever been on the road with you when you were a youthful driver. However if you happen to be a young driver (say 16 to 29), the real reason we let you in front of us is because we know you will speed away from use as a way to say thank you and you getting as far away from our car as fast as possible is one of the kindest things you can do. The fact is, we don’t trust you and feel much safer having you in front of us speeding away from us instead of being behind us speeding toward us. So on behalf of all of us, you’re welcome … and slow down, you could hurt somebody.