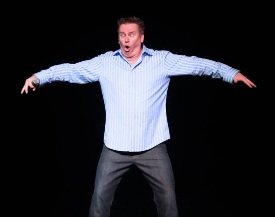 So this weekend I went see my anniversary present. My sweetie-baby-cutie-wifey-pooh got me tickets to go to see Brian Regan in concert, or the stand-up equivalent, for one of the ten sold out shows in Salt Lake City. It would appear that along with casseroles, JELL-O, and using profanity like “Oh my heck!”, the predominant culture in Utah has a great deal of love for the comical musings of Brian Regan. Now if you don’t know who Brian Regan is . . . well, first off I’m baffled that there might be people out there who might know who I am who have no idea who Brian Regan is. And second, look him up on YouTube, or Netflix, or simply Google the man and listen to his standup, chances are he’ll make you laugh.

That is unless you happen to be a bagpiper. During the show Brian did a little bit about bagpiping, equating at the end of it that there is no real way to differentiate between good and bad bagpiping because they sound pretty much identical. People laughed and clapped and we all moved on to enjoy more jokes. In fact I would not have given the bagpipe joke another thought if it hadn’t have been for the sound of bagpipes being played in the distance as we all walked outside after the show.

At first I wasn’t sure if this was happening on purpose or if it was just sheer coincidence. Its downtown Salt Lake, and when an event is happening there is always a street performer that turns up for a chance to work the crowd for a little spare change during the mass exodus from the performance to one’s car. As Angela and I got closer the piper, the first thing that happened is every teenager that had just been to the show couldn’t help but say the exact same thing, “Hey guys, is he any good? I can’t tell.” Then they all laughed at their little joke, ignoring the fact that they had all just been to the same show where that exact joke had already been told. 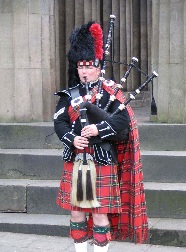 It wasn’t until we were on the sidewalk walking past this performer, who was in full Scottish attire, that I noticed something odd. He had no tip collection device in front of him for people to express monetary appreciation for his musical skills in playing the bagpipe. Then to seal the “this is no coincidence” notion I had, he finished the song he was playing and in a loud boisterous scoff said, “Take that Brian Regan!” and started playing a new song.

And that’s when it hit me; this was Regan’s third to last show, which meant that there were seven audience packed performances where that joke was told, and apparently in one of those shows this avid local bagpiper was there. I could almost see him laughing away at all his jokes, until, at first mention of bagpipes he caught a case of laughter sobriety. This man realized that the funny man on stage is daring to match wit against the glorious and near sacred musical instrument “the bag o’ pipes”. I can only imagine that being covered by a wave of laughter all he could do is hold a hard straight face, or perhaps even going so far as to say “Oh no you di’int!” except in the Scottish way, so something like, “Och awa’ and dinnae talk pish!”* (translation: We don’t believe you.) Although, it was Utah, so he probably just sat quietly and then when he got home he called all his bagpipe playing friends and strongly expressed how unfunny Mr. Brian Regan was and that he would not be wasting his money to see him ever again.

* A thank you to Chewin’ the Fat’s skit called Taysiders in Space for that line.

Still there must have been something a bit more to it than that because this guy refused to let it go. He even went out of his way to get the time of another one of his shows, and then in full Scottish regalia, donned his bagpipe, and on a frosty January evening set up just before the show ended and fervently bellowed away on his pipes just to spite a comedian for daring to kid about a bunch of pipes connected to a bag of air.

I can appreciate his passion toward wanting to make a point; I’m just not sure he went about it the right way. I don’t imagine Brian Regan ever caught wind of this one man pro-bagpipe demonstration at one of his shows, and if he did, in truth it’s really just more cannon fodder the whole joke in the first place. Plus, it does create a certain element of concern about the personalities of bagpipers in general.

I know what you’re thinking and I agree, but sadly it only takes one person to screw it up for everyone else. Not everyone obsessed with Jody Foster wants to shoot a president, but whenever one of them now expresses their love for her, there’s always someone in the room who is going to wonder. Just like from now on, whenever I meet someone who loves bagpipes, I’ll always be sure to steer conversation clear of Brian Regan . . . you know, just in case. Still, I probably should have given him a dollar to thank him for the Smirk, and for the reminder to not take things too seriously.