by Richard Timothy | Sep 30, 2010 | Adolescent Shenanigans, It Seemed Like a Good Idea at the Time, Non-Fiction, Observationally Speaking, Public Service Announcement, When I Was a Kid | 0 comments 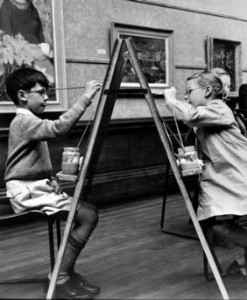 Not too long ago I did a little Smirk about sleep and some of the things we do while we are asleep… like dreaming (I felt that needed conveying for those who have not yet read that piece). However, there was one thing I was reminded as I was writing the piece… the exact opposite of sleep and dreaming. Then again maybe it was awake dreaming. I’m not altogether certain, all I can say for sure is that the only hallucination I’ve ever had in my life was a result of no sleep… for three days straight.

It happened during my senior year of high school. During this phase of my life I had decided that art was my life. I even managed to get the authorization to have three of my seven classes to be art classes. I had even gotten permission to have a ceramics class during 7th period, when no ceramics classes were offered. The teacher would teach her normal beginner art class and I was left alone to play in the ceramics room. It worked very well for me, and you’d be amazed at the number of ceramic thrown bowls I had to give as gifts to friends and family for no reason what so ever.

It was during my senior year that my interest in school began to wane. I did well in school when I would go. It’s just that I wasn’t terribly interested in going, at least going before noon. Staying up late was a bit of a family tradition in my house. Going to bed before midnight was what we called ‘going to bed early.’ Seriously, the lights in our house were almost always on until two a.m. or later, and the last ones to usually go to be… my parents, especially my mom. The woman had more projects than New York, and was always up late trying to get one completed before the new day.

I don’t remember the reason for why I stayed up all night the first night. It might have been for a reason as brilliant as, “Because I could.” Believe me, when you’re 17/18 years old, reasons like that were usually as brilliant as you got. The following day I was amazed at how good and alert I felt. So that evening after dinner was consumed, friends had gone home, and I had made my ‘Sev Run’ (this is what we called going to 7-Eleven) to get 32 ounces of neon colored bubbly sugar water we lovingly called “Dew,” I committed myself to my room for the rest of the evening, knowing that I would be getting tired at some point due to my lack of sleep. 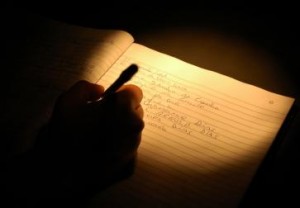 After writing two love poems about girls that would never know how I felt (ah to be a young and suffering artist), I let my imagination dive into a novel a friend gave me to read. When I reached what I considered to be a good stopping point, it was about five in the morning. I only had two hours before I would need to get up and get ready for school. That is when a line from the cinematic genius is ‘Strange Brew’ came to mind. There is a scene where two brothers get a job at a brewery. Once home they decide to celebrate by drinking all of the free beer they had gotten from their new job. As they are carrying cases of beer into the house, one of them says, “… let’s not blow it by being late for our first day on the job…” to which the other brother replies, “Well, why don’t we just stay up all night?”

Why not indeed? Even thought it didn’t work in the movie I was sure I could pull it off. Besides, there was only a little bit of night left, and I saw no point in going to bed. I was even early for school that day, which rarely ever happened to me that year. 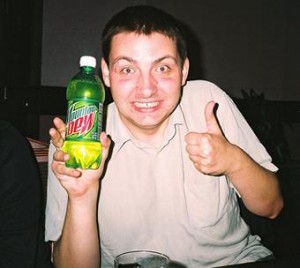 Day two of no sleep left me a little more aware that I was missing something that my body and mind were in full support of receiving. The prospect of enjoying some sleep that evening was the key ingredient in getting me through a few nodding off moments during my afternoon classes. Well that and the constant flow of Mountain Dew both in and out of my body, which helped keep me alert and on my toes… mainly because of all the visits I had to make to the rest room.

Sleep would have been eminent had it not been for the gathering of friends that happened right after school. None of us had any homework, which was rare, so we hung out, watched movies, and eventually toilet papered our arch nemesis’s house. Yes we broke all conventional rules for toilet papering a home and did it during a week night. 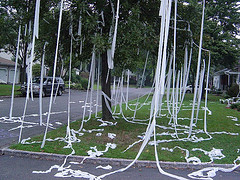 It was a cop’s house, the one that was always giving us a hard time. He would always go home while he was on duty and leave his police car running in his driveway. I think it was so the gas would be used up so on record it appeared he was out patrolling all night. Toilet papering his house was just the kind of spontaneous thing that motivated me to forget all about being tired and filled me with the required amount of adrenaline I needed to make it through another sleepless night. Well that and getting chased around down by the cop after he left his house. Stealthily sneaking back to my house did take a little more time than expected, but was well worth it.

So when four a.m. arrived, about the same time I was getting home, I dipped my cup of reasoning into the endless pool or teenage wit and wisdom, which all teenagers drink from during their time as a teen, and exclaimed, “I’ll get all the sleep I need when I’m dead!” I mean sure it might have sounded cool, and rebellious, and edgy at the time, but it really was quite an erroneous statement. Unfortunately, it was lost on me at the time, so I proceeded to stay up for a third day in a row… more than anything though, I just wanted to see if I could do it. Turns out, I could. What? It seemed like a good idea at the time.

It was on day three, during my 5th period art class that my REMly challenged mind had had enough and was going to make it quite clear to me that it wanted a break. I was working on a three foot by two foot pencil drawing of a woman in a dress. Her hair was hanging down in front of her face, which was perfect for me because I was still having trouble drawing faces proportionally. The drawing had no face to speak of, just lots and lots of hair. I remember one of her arms was hanging to her side, but it was a sort of side profile drawing so the arm was placed right in front of the dress. It was as I was shading the dress around the arm that it happened.

The entire picture became three dimensional and popped off of the paper. At first I was quite please because this allowed me to grab the lady’s arm and move it out of the way so I could get the shading on the dress right where her arm was hanging. The problem that arose was her arm kept slipping out of my hand and falling back to its original position, and ultimately getting in the way of the shading I was doing. After five minutes of this, with me getting more and more frustrated by the arms interference, one of my class mates broke the silence by asking me, “Are you ok?” 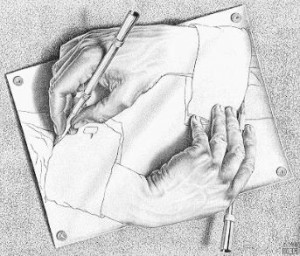 He told me that I kept putting my hand on top of the drawing and then would move my hand off of it like I was holding something and putting it down next to the paper. After shading for a few seconds I’d do it all over again. Also, apparently there were a few times that I hunched over the drawing and started scratching at the arm with one hand while I was shading right next to the area I was scratching at. My experience was that I was using my finger to tap her arm to the side while I shaded.

As the realization of what just happened hit me. I said I was fine and as I looked back at my drawing I saw the arm falling back into the paper as a flat two dimensional image. I only had two periods left before the day was over and I could go home, but damn if those two forty-five minute classes didn’t have a two to one special going on that day. For ever one minute that passed, I got a second minute for free. It was an epic hour and a half. 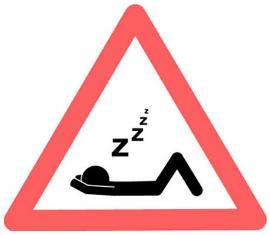 When I finally got home, I went straight to my room, taped a “Sleeping” sign on my door, and climbed into bed. I have no recollection of my head ever hitting the pillow. However, when I woke up fifteen hours later to get ready for school, it was clear by my reflection in the mirror that not only had my head hit the pillow, but that one side of my head had battled against it to gain control of my hair for the night. The pillow had won and the left side of my head had my hair sticking out in every direction but down. I am happy to say that after a shower and a hefty heaping handful of hair gel, my puffed pillowy hairdo deflated. Plus, I was no longer sleep deprived. Otherwise, I probably would have just said, “screw it” and gone to school looking like I was trying to win a Robert Smith lookalike contest where I was the only contestant (again… my junior year was an unfortunate time during my high school years… damn you Robert Smith… damn you The Cure.)

So any sleep deprived stories about your school years you’d care to share?