Today I was asked if I play the lottery, which got me thinking about the concept of gambling overall and I came to the realization that sometimes yes I do play it, I just never really realized that I was. My earliest gamble was at the age of 8 months old were I was gambling on whether or not I the wedge of yellow fruit was going to be a pleasant experience if I was able to get it in my mouth. I lost, but I have since then learned to appreciate the taste of lemons. At the time all I could do was spit out the wedge, and yell profanities at my giggling father, which of course sounded like, “Whaah!”

As an early teen I was always motivated to take part in the lottery supported by the postal system. This was thanks to the envelopes mailed to my parents with Ed McMahon on the cover informing them that they had been entered I to win 10 million dollars… that is only if they purchased magazine subscription for a year… which I had them do… at least four different times. You know what I learned? Ed was a liar, well, a half truther anyway. Don’t get me wrong I still opened up those letters every change I got, but that was because they always gave you an entire sheet of stickers. I never really had stickers, so the page of self adhesive magazine covers was usually the closest I ever got to having any. 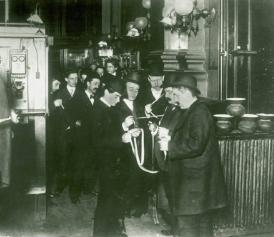 I also did a little stock trading once, which really just feels like a nicer way to say gambling, and because it officially not called gambling it is legal to gamble this way in every single state, even though in most states gambling is illegal. As for my experience gambling stocks, well, it mostly just felt like watching a very slow paced, black and white, foreign drama where you were always watching the bottom of the screen so you don’t miss and of the subtitles so you know what’s going on, but at the same time you miss all action scenes, which usually encompasses watching someone clean a window, or rearranged match books. What I learned… just because your gambling has subtitles does not enhance the tedium of the experience in any way, actually it only makes it worse.

As for the ‘Lotto’ lotto, I don’t believe I’ve ever actually purchased a ticket or scratch game, although I have thought about it. I have developed a brilliant system for then this feeling comes up though. If I feel the urge to play a game that has balls with numbers on them, I’ll call my friends and we’ll go play some pool. If the feeling maintains I just use the money I would have spent on a ticket and buy a nice bottle of wine instead, which, for the record, always pays out.

What are some of your gambling or lotto moments that, at first glance, don’t really look like lotto or gambling moments?