A Rather Fishy Monday

by Richard Timothy | May 17, 2010 | Adolescent Shenanigans, I Just Don't Get It, I Think There's a Point, Non-Fiction, Observationally Speaking, Something I Know Nothing About, When I Was a Kid | 4 comments 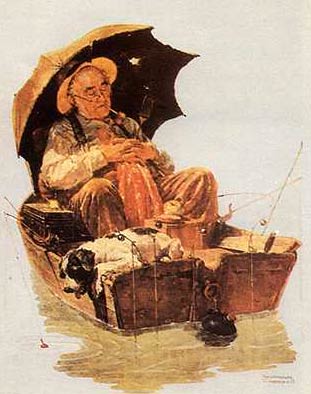 So I walked into my office today, not necessarily with a case of the Mondays, but I was very aware that it was a Monday. I had spent my commute to working listing to Neil Gaiman reading his book, The Graveyard Book and pondering what I could write about today, but mostly listening to Neil. Then I walked into my office and the first thing my office mate said to me was, “Dude, its 80 degrees today. The fish are going to be biting!” And as simple as that, I had a topic.

I’m not sure what it is about fishing, but for some people there appears to be me some magical obsessionary mind control power associated to it. I believe it was Steven Wright that said, “There’s a fine line between fishing and just standing on the shore like an idiot.” Besides being obvious, I think there’s a lot of truth in that statement, especially coming from the idiot side of the coin. Still, today was a reminder that of what it means to be a fisherman.

Fishing has been a topic that seems to keep coming up over and over again, randomly and without any real interest on my part. There is the daily discussion I have with my office mate. Then there was some strange that talked to me about fishing for about two hours the last flight I was on. Plus, the last time I was in my acupuncturists office there was a lady having a very loud and intense conversation about the fishing her and her husband had just gotten back from.

Still, talking to a fisher-person about fishing is a lot like talking to my niece about Scooby-Doo. They get this look in their eyes as they begin talking about it. It’s a combination of love, joy, reverence, and bouncy excitement. As my office mate said today as he was leaving work three and a half hours early so he could go fishing for the afternoon, “It’s like crack. I’ve got the fever. I’m twitching and getting out of my seat every five minutes to go look outside to see how the weather is. Don’t worry, I’ll be back in an hour if I don’t catch anything.” 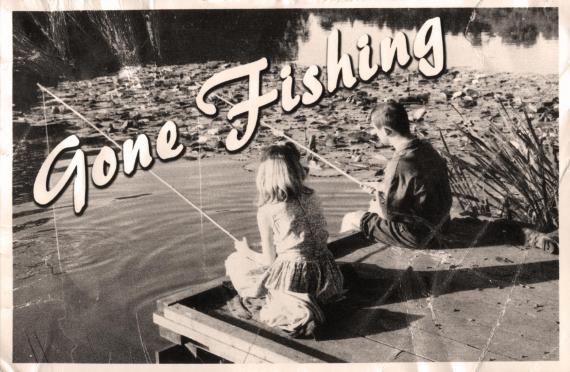 I told him he wasn’t going to be back in an hour regardless if he caught anything or not. He agreed, and with that I had the office to myself for the rest of the day. He did ask me and anyone else that walked into our office if we wanted to go fishing with him. It’s not that I didn’t want to go… ok it was that actually. He did dance a little jig in the office when he did get off the phone, commenting that he had found someone to go with him. Apparently fishing is a “bring a friend” activity. I would have never guessed that.

This belief is mainly a result of the one and only fishing trip I took with my grandfather while growing up in Wyoming. My grandpa was an avid fisherman. He had four or five poles hanging on the wall in the entry way of the house between the garage and the main living area. Out of all the things that were off limits at my grandparent’s house, grandpa’s fishing equipment was the holy grail of them all. We’d sneak into the back yard and invade grandma’s raspberry bushes no matter how many times we were told to stay out. We’d sneak downstairs and look though all of grandpa’s old tvs. He was a television repair man so the house was full or old non-operating televisions saved simply for the prospect of possible used parts. But when it came to grandpa’s fishing goods, we would look at them from afar, but never dared get close enough to even touch them. 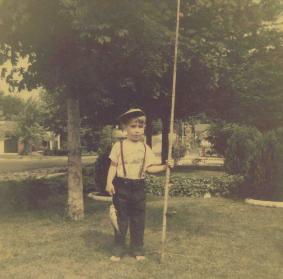 You can imagine my and my brother Mike’s surprise when one day, my mother informed us that grandpa would like to take us fishing that Saturday. I believe I was 7, so that would have made Mike 8. Self control and patience were words that had been said to us many, many times, but we really didn’t have a clear understanding of what they meant at that age. So you can imagine the concept of sitting quietly so as to not scare the fish did not last very long.

I mean for the first half hour to an hour it was all rather grand, we learned to cast, and reel in the hook, and then cast again. It was explained that we needed to reel in slowly so that the shiny spinning lure could attract the fish. This lasted about four casts. Being only fourteen months apart in age Mike and I were a bit competitive at this point in our lives, and soon the casting game began. We would take turns casting with all our might to see how far out into the lake we could make a splash. The second the splash was made we would reel in the hook as fast as possible so we could cast again.

Grandpa informed us we would not catch any fish that way and to just cast and leave the line out there. We were to sit quietly on the ground and wait for the fish to bite. This lasted maybe 10 minutes before I had a brilliant idea. It was clear to me that the reason the fish were not biting was because they were too far away from the hook and could not see the little worm, wiggling and calling to the fish to come over and have a snack. So I carefully placed the pole on the ground and started throwing rocks as far as I could into the lake. 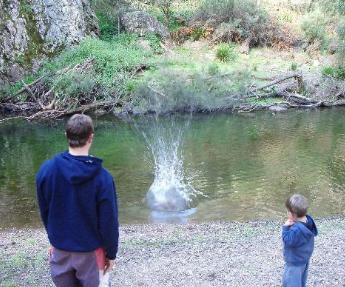 When my grandpa yelled at me to stop throwing rocks because I was scaring the fish, I told him I knew that. I then explained that if I threw the rocks far enough then I’d scare the fish closer to the shore so they could seem my hook and I’d catch more fish. I mean it made perfect sense to me at the time, and Mike agreed wholeheartedly. It was a fool proof plan. I’ve later come to learn that it was proof that I was a fool when it came to fishing.

Grandpa just stared at me for a bit. Then shook his head and told us to stay around the lake. He was going to the river and would be back in an hour or two. Mike and I followed orders and stayed by the lake. After twenty minutes of throwing rocks and not getting any bites we decided that we needed to go around to the other side of the lake (it was a very small lake). Apparently the fish were swimming away from the poles instead of towards them because we were not throwing the rocks far enough. Once on the other side we started throwing rocks again. After half an hour we went back to our poles, sure that we would have a fish on the end. Elusive little buggers… there was no fish on either of our hooks, and there was no worm either at that point. The fish had picked the hook clean. So we took a break, and got out our sack lunches and enjoyed some peanut butter and jelly sandwiches, a can of soda, and some homemade cookies, which I ate first.

After lunch we were both certain that grandpa didn’t know what he was doing. It was clear that there were no fish in that lake. We even spent about three minutes not moving and looking at the water and didn’t see a single fish! So we had a water fight instead. Soon we were both quite soaked and shivering and done with this crazy myth called fishing. We wanted to go home, so we started yelling for grandpa. A little while later he came up a small trail with one small fish on a string. It was an amazing thing to see. I kept asking to see the magic lamp grandpa had so he could wish for a fish. At the time it seemed like the only logical explanation there was for where it came from. I suggested that next time he should wish for a bigger fish. He didn’t smile at me once on during the drive back home, which only took about 10 to 15 minutes, but I would have sworn it was closer to an hour. 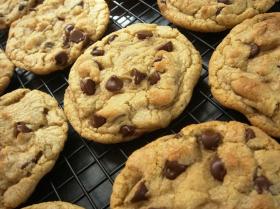 Once we got home we jumped out of the truck and ran into the house yelling for mom. Having grown up with her father, she was a touch surprised we were home so soon from fishing. She asked how it went and we told her all about our day, interrupting ourselves only twice to ask if there were any cookies left and if we could have some more. After the story of our day was finished, we went to change into some dry clothes and mom talked to grandpa. Once grandpa left, mom checked with us to see if we enjoyed the fishing part. We were honest, we enjoyed playing in the forest, but the fishing thing was not our favorite part of the day. Mom smiled and told us that maybe we could go back to the lake for a picnic sometime soon.

It wasn’t until years later that we learned that grandpa was so unimpressed by our first fishing outing that he had no intention on taking us a second time. It didn’t matter though, he still let up play with some of his old broken televisions when we’d go over to visit, and that was a lot more fun than catching a slimy old fish any day of the week. 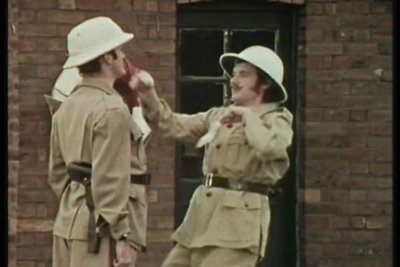 I’ve stayed pretty consistent about my lack of interest when it comes to fishing, but I’ll listen and encourage. Fishing folk really seem to enjoy having an ear around that will listen. I still don’t get it. It seems like a rather unrewarding time suck in my opinion. Then again, to be fair, they probably think that spending hours at a computer writing tangents and random observations is a lot like combing your hair with a cheese grater, slightly amusing, but mostly painful. And as that old Chinese proverb says… Give a man a fish and if you’re lucky you might get some sushi, but teach a man to fish who doesn’t want to learn and you’re probably going to get slapped in the face with a wet fish.

What are your thoughts about fishing?