A “Quit it” Warning that Truly Works on Family 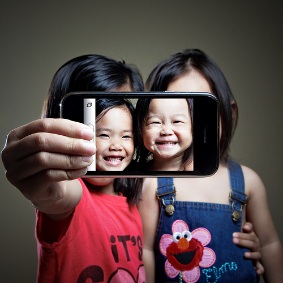 Today’s Smirk is brought to you thanks to my sweetie-baby-cutie-pie-wifey-pooh and her younger sister Rochie-butt. I’m not sure why by for some reason terms of endearment for my wife’s family always includes making sure the name of endearment ends with something related to or connected with the derriere region of the human physique.

So here’s what happened … Rochelle, aka Rochie-butt, was visiting for a few days. Now I don’t know about you, but when I get together with my family let’s just say there is an element of goofiness that comes out, gets passed around and is enjoyed by all. Angela’s family shares this same quality, and when she and Rochelle spent a little too much time together (usually twenty minutes or longer) their motivation to break into song, do silly walks or dances, make sound effect noises, or … well you get the point, these types of actions come to the forefront of their personalities.

When these two get in this type of mood two things happen, first, I openly and loudly exclaim how eerie it is at how similar those two are, and second, I attempt to join in starting off by using Star Wars sound effects or sharing my best “Hulk smash!” impression replacing Hulk’s name with someone else in the room. Hey, when a case of the giggles starts there are no dumb additions to keep the fit going. I won’t say that in looking back there has never been the need to offer a formal written apology to someone, but now that I’m out of my twenties, it rarely, and I mean rarely, happens.

So back to Angela and Rochelle, I hear them walk into the house and it is clear that the giggles have already started, I head down to help bring in some groceries and if at all possible get Angela to do her Chewbacca yell, which she will only do when she is in the type of mood. It’s not that her Chewbacca yell is all that authentic, but it always makes me laugh. 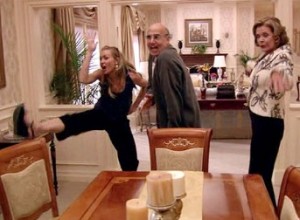 As all three of us are in the kitchen, maneuvering around each other, putting away the groceries and Rochelle manages to say something that inspires Angela to begin doing a little dance while singing out, “I’m Rochelle. I’m Rochelle.”

Rochelle makes it clear that she is about to hit the “no more giggles” wall. This is the point in a community shared bout of laughter that someone essentially sobers up in an instance and everything that was previously hysterical is now dumb and not funny in the least. It’s kind of like driving 80 on the freeway and then putting the car in reverse and stomping on the gas. This bipolar action from everything is funny to nothing is funny takes about .0025% of a second, confusing everyone in the room who is still enjoying the warm fuzzy feeling of group laughter.

Rochelle, still half laughing, warns Angela to “Quit it or I’ll get out my secret weapon!” as Angela continues with her song and dance number. Rochelle then hits the wall and the warning to “quit it” stops and her “secret weapon”, or implement of stopping the family insanity, comes out of her purse as she states, “Fine, you asked for it.” 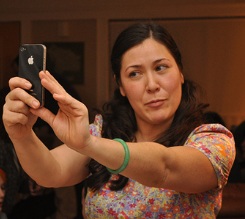 In her hand is her smart phone and tapping away on her touch screen to pulling up its video record function. Once it is ready to go (this take about five seconds tops), her finger hovering over the record button, she gives her final warning, “Go ahead. Keep it up. I’ll put that shit on Facebook.”

Not only did Angela stop her Rochelle themed song and dance, but the same second Rochelle finished her final warning, Angela simultaneously jumped and hid behind me to hide from the camera. Then, peeking over my shoulder with the phone at the ready she squeaked a defeated, “No.” (As is no she would not be put on Facebook doing her musical Rochelle impression.)

I was amazed at how effective and efficient Rochelle’s threat was. I’ve never seen anything work quite that proficiently, and it got me thinking about the benefits of converting to a smart phone for crowd control purposes at Thanksgiving and Christmas. 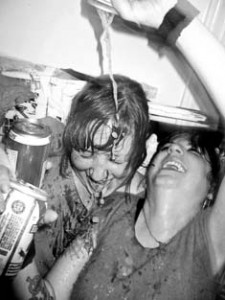 Note: It is important to point at that the power of this threat does not work on kids up to the age of 12 and adults who have had a few more than too many, apparently adolescents and inebriation both seem to carry with it the characteristic of lessened inhibitions when there is a camera present ready to record your every word and action. It’s as if one’s inner “Born to be a star” personality takes over and all you have to do is sit back and enjoy the show.

And, in the case with the drunken adult, it’s a pretty good way to encourage them to pay for all your drinks the next time you go out as payment for letting them delete the only existing copy of the video you made of them off your phone.

The laughter started again about twenty minutes later with no repeat threat of “putting that shit on Facebook” regardless the song and dance number either of them was doing. It didn’t matter though, the rest of the night I replayed the initial event over and over again, smirking every time I got to the point where the threat was made and my sweetie-baby-cutie-pie-wifey-pooh jumped behind me in an act of defeat before the record button could ever be pressed. Ah, the power of technology and its assistance in controlling the amount of goofiness one’s family is willing to dish out at any given time … just brilliant, and a Smirk, I feel, well worth the sharing.