A Guide to Understanding the Do Not Throw Pillow

The battle of the sexes, it’s a battle that has been going on as long as there has been sex, well sexes. It’s not so much a battle type battle, like Helm’s Deep or… um, Highlander I guess. No, I mean that battle of perspective where discussions happen on epic levels about issues that makes no sense to one sex, but perfect sense to another.

Actually, I think to get as accurate as possible, it’s not so much a sex thing as it is a personality type thing, namely the masculine and feminine personality types. This is not the same thing as male and female. I have met some very feminine men and very masculine women. I myself have been known to have some typically feminine perspectives about some commonly male topics, like football for example. Of course there are exceptions to the rules, but for the sake of today’s Smirk the thing to remember is that they are exceptions and not the standard traditional stereotype. 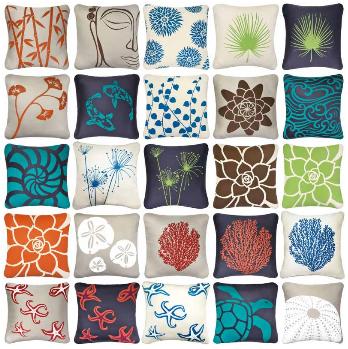 So what am I talking about? What is this topic of endless hours of banter between the masculine and feminine personality types? Nothing less than the always controversial topic of… throw pillows. Here let give you a conversational setting that cover both perspectives on this topic:

Feminine (F): I got some new throw pillows.
Masculine (M): Ok… um, why?
F: Because they’re pretty.
M: I can see that, but they don’t look very comfortable.
F: You don’t use them.
M: You mean you bought pillows that are not meant to be used?
F: Of course you use them.
M: What? Wait do can I or can’t I use them to sleep on.
F: You don’t use them to sleep on.
M: Then what’s the point?
F: They’re throw pillows. They add color and design to places in the home.
M: But you said we don’t use them.
F: Not like you mean when you say use.
M: So they serve absolutely no functional purpose?
F: Yes they do.
M: Like what?
F: They’re pretty!

And this is where people voices generally tend to increase in volume as the circular conversation continues, sometimes for hours.

For the feminine perspective throw pillows fall under the visually aesthetic realm of things that help make the world more beautiful, especially your home, apartment, flat, bungalow, etc. The main point that the masculine perspective always fails to realize is that for the feminine something that helps an area look prettier constitutes as a very viable and real functionality.

For the masculine perspective somethings can be pretty, but it becomes much prettier if that object is functional, like Italian leather shoes, or a fully restored cherry condition 1969 Mustang. The concept of throw pillows falls into pointless frivolity on a number of levels for a number of reasons. The first and most obvious reason is the feeling of utter pointlessness the masculine type gets when looking at one. 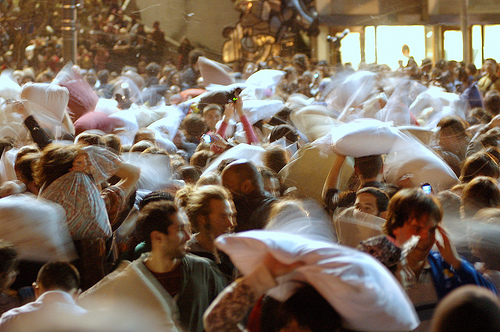 Personally I think the main problem comes from the name throw pillow. You have two separate words that when the masculine perspective combines them together they automatically think that they are specially made pillows for optimal striking in a pillow fight setting. To the masculine a throw pillow should be the ninja star of the pillow industry. A pillow that you can throw at advancing pillow toting minions in a goose down battle for control of the house… or television remote at the very least. 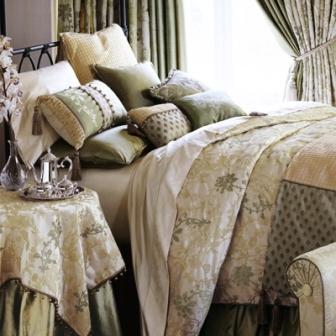 When the masculine type first learns that throw pillows are not to be thrown in any context what so ever, it creates a sort of syntax error is almost the human equivalent of the blue screen of death. Even after they reboot, the idea of gently moving the arsenal of things called throw pillows from the bed to a designated storing area on the floor makes their brains cry a little.

The end result of this debate consists of two separate resolutions that each type chooses to not tell the other. The masculine rejects the functionless attributes of the throw pillow and uses them whenever the feminine is away. This rarely allows for a comfortable and deep sleep opportunity because the masculine has to be on their toes so they can place the used throw pillow in its place when the feminine returns home.

The feminine are well aware of this practice. The ware and oil stain left by a sweaty sleeping head on the throw pillow is a bit obvious even if the masculine can’t really tell. What this does is ignite a “I’ll show them” reaction in the feminine to purchase more throw pillows. The rational is that the old ones are becoming dirty and worn out. Besides it’s cheaper to buy new throw pillows than it is to buy a steam cleaner. This also creates a desire in the feminine to find the holy grail of throw pillows. A completely functionless yet brilliantly beautiful throw pillow. 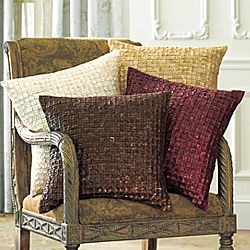 I am here to tell you that not only have I seen this holy grail throw pillow, but it lives at my house. That’s right, I am telling you we already got one. And you know what. It’s very nice. Seriously, when looking at it even I’ll say, “Oooo what a pretty throw pillow.” It’s about 14 inches by 14 inches and one full side is covered with ½ inch mother of pearl squares. Again, for the record I do concede it is very beautiful… and utterly useless, but very pretty.

It’s a debate that I don’t know will ever go away. The only real compromise I have been able to find is that for every two throw pillows the feminine type purchases the masculine type is allowed to trash one of them as they see fit. Yes this is a compromise, and believe me, to all you masculine types out there a 2 to 1 ration is actually pretty damn good odds in this situation. The thing is, the longer you take to wear out, trash, blow up, sneeze on, use in pillow fights for control of the remote, or use as a sponge to wash your car, the longer it will be before the feminine type purchases new throw pillows. Please note that both parties need to agree on this compromise before you, the feminine perspective, begins purchasing new throw pillows, and before you, the masculine perspective, begin lighting fires to existing throw pillows.

The throw pillow debate is one that has been going on far too long on this planet and it needs to stops. Can’t we all just get along?

Although, and this is a theory I’m making up on the spot here, if an alien race ever does attempt to invade our planet I honestly think we could avert it by simply introducing throw pillows to the feminine type aliens. Then all we’d need to do is get some popcorn, sit back, and enjoy the show.

Any throw pillow thoughts from your end?