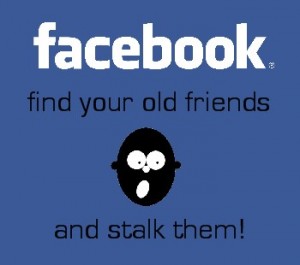 Just like no one expects the Spanish Inquisition, no one really expects to find themselves in the middle of a Facebook stalking session until, “whala”, there you are. Here is my latest “accidental stalking” moment thanks to Facebook. Someone sent me a nice little message concerning my birthday. I was touched and flattered that this person, who had been reading my Smirks, took the time to send me a birthday message. Being that the message came via Facebook, there was a little link sitting there, taunting me to learn more about this person. So I took the plunge…

They were from the UK, in a relationship, and I was able to learn the names of all their siblings… I learned were they worked and soon I was clicking though photo’s of some birthday party they went to earlier this past year… it was like I was there. I even thought about commenting or liking some of the pictures… and that’s when it hit me… was I cyber stalking? I think I might have been, although I’m not exactly 100% sure what that means. So instead I opted to send them a message back and actually strike up a real conversation with them, instead of going around the middle person to obtain a bunch of information about, well, the middle person. Searching someone’s Facebook page to learn something about them sometimes seems a little like rummaging through someone’s garbage to learn things about them. Either way, they have no idea you are checking up on them.

This has happened more than once, on the rummaging through someone’s garbage, but the searching someone’s Facebook profile to learn about them without taking the time to connect with them so I can learn about them from them. Each time this happens I find myself thinking that Facebook is the Google of stalking, usually accidental stalking, but stalking none the less. I’m sure I’m not the only one and I’d bet most people never intended for any stalking to happen in the first place. I think it’s a bit inevitable though when your social media tool asks for certain information that is then displayed for all the world to see.

And they just keep coming up with tools and apps that make it easier and easier for people to accidentally find themselves participating in stalking activities, without realizing it until it’s too late… too late in the sense that when it happens you go, “Ohh, ick, I’m stalking.” Resulting in you running to the bathroom to take a shower and wash off that “suddenly stalking” feeling. So, I’ve taken a look at Facebook, and here are three steps that people do that can lead to unintentional Facebook stalking:

The “Interested In” information seems to confuse more people and give an overall wrong impression. It appears a lot of people use this as a sexuality meter. I’ve seen so many men who are married that will specify to the world that they are, in fact, interest in women, and vice versa with married women interested in only men.

If they really wanted to clear things up, why not make the options more specific about your interests in other people. What about “Interested In” options like:

I think that would clear up a lot of confusion instead of simply giving you the option of men or women.

I have no idea what this button is for or why it exists. Does anyone know the point of this button? I mean apart from making adolescent teenage boys giggle every time they click on it. I will state that for the record, and to the best of my knowledge, I’ve never been a poker or pokie on Facebook.

Take away the adolescent giggly suggestive connotations associated with the word and let’s look at it from a literal perspective. When someone walks up to you and pokes you on the shoulder to get your attention. Does that bug you? It does me. I don’t like it and I don’t know anyone who does. I associate it with little kids trying to get my attention and they just keep poking me into annoyance. I mean it worked for me when I wanted attention as a little kid, it’s just that it turned out to be the wrong kind of attention.

Step 3: Blindly Clicking on the “(so and so) added new photos” Link from the News Feed 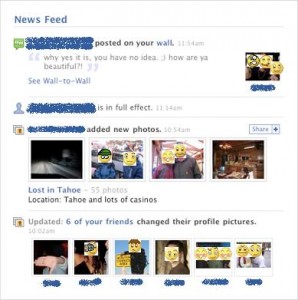 Statistically speaking, posting photos will get more views than anything else you can post on your wall, and thanks to the friendly little news feed, it tells all your friends every time you post a new photo. So how is this related to stalking?

Ok, so here’s what happened, I have an old college friend from years ago who is a Facebook friend, who I don’t think I’ve actually talked to yet since becoming friends on Facebook. Anyway, she went to the UK on holiday, which I had no idea of until I got a little news feed notice that she had posted photos of her trip. I’ve been to London and loved it, so I was a touch curious to see where she had gone. So, I clicked on the photos on my news feed… there were a few shots of her and her friends at Piccadilly Circus, a shot of her by the London Eye and one next to Big Ben. Now I don’t know about you, but I know that after visiting a place and returning home, when I see shows or photos of those places I always get excited and tell the person closest to me, “I’ve been there!” even if I don’t know that person.

I was saying that a lot to myself, since no one else was around. Eventually I went back to the friend’s page and noticed some new photos had been posted from the same trip. The first photo I clicked on turned out to be a “night out with the friends” picture. As the photos progressed so did the number of drinks on their table, but their smiles kept getting bigger even if their eyes began to disappear more and more behind closed lids. Then, as I clicked next, a picture came up of one of her friends on a beach in Spain. A few more clicks and I realized my friend was not in any of the Spain photos. That realization accompanied with the fact I was not terribly interested in seeing any more photos of men in Speedos on a beach in Spain moved me to click out of the photo album and back to the profile.

That is when I realized that the set of photos I was looking at was a result of her friend tagging her in her friends set of “Trip to Europe” photos she had just posted. I had been perusing through the photo album of some lady I had never met and was not even friends with… and that was when I had that, “Eww, I’m stalking on Facebook” moment again. I didn’t mean too, it just sort of happened… stupid Facebook and its ploy (that I just made up) to turn the world into a race of virtual stalkers.

My (Not So) Honorable Mention: The Stalking Apps
Now this is not an app that allows you to tack up stalkings along a virtual fireplace… but I’m sure there is some kind of fireplace stalking decoration app for the iPhone somewhere in their store… and if there isn’t, there will be soon. No, what I am referring to is an app that a friend of mine showed me on his iPhone where you enter your location and it goes on Facebook and gives an update as to where you are and who is with you… allowing people to cross that line from accidental virtual stalker into an active real life stalker where you actually get out of the house, drive across town, and see the stalkie in person and you can even get a map to the stalking location simply by clicking on the link of the location that the app automatically puts on your Facebook page.

On the plus side, whenever I see a post like this on Facebook, I never have the urge to run out of the house and head to the location my friend is at so I can stage a surprise chance meeting. So, at least I have that going for me. I suppose the most important aspect of all of this is that it remains accidental. The concern begins when you go out of your way to stalk on purpose. Even if someone is in the limelight I think there is a very small yet distinct step between a fan and a stalker… I believe it’s called a restraining order.

I’d like to hear your thoughts on this. Have you noticed any additional accidental stalking options that Facebook recommends to its users? Please feel free to share.