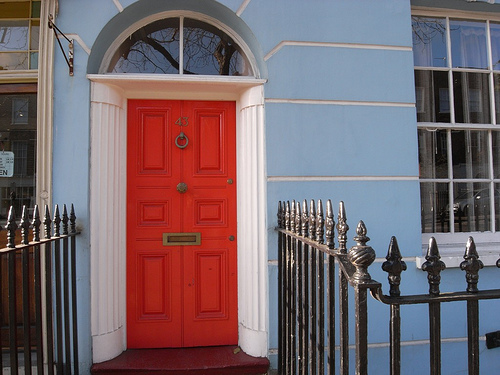 One of the things about the weekend, weekends in general I mean, is that you are typically home over longer periods of time than you normally are during the regular week. Meaning, you are much more apt to be at home when the occasional vagabond makes their way into your neighborhood and begins tapping at your front door.

Now when I was little and heard someone knocking at the door I would jump up and make a mad dash to see who it was going to be. The front door was a kind of random surprise and gift dispenser… with a doorknob. The knocking was the signal letting the entire house know that in what was previously an empty location now held the unknown. 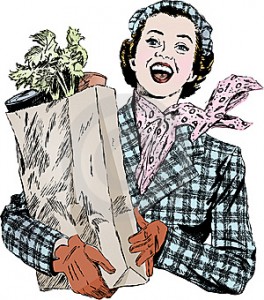 It could have been mom with groceries… and cookies… YES! It could have been friends popping by to see if I could play. Maybe it was the pizza guy, or cousins with pizza, or maybe just the grandparents coming over to dinner. Hell, if the season was right I could have even been Santa. The possibilities were endless. Then again, there was always the chance that it was just some bloke wanting to talk to your dad. But you never knew for sure. All you had to do was twist the knob and see what was on the other side.

At the same time, it almost seems that people expect others to deal with a knocking door with the same fervor as a ringing cell phone. I’ve taken up to a minute to answer my door after an unexpected knock, and by the time I open the door, people are either back in their car and about to drive away, or are just not there. It’s as if they knocked, counted to 3 and assumed no one was home, so they leave. Unless of course it’s Halloween, then the little codgers will stay there and keep knocking for a good minute straight. 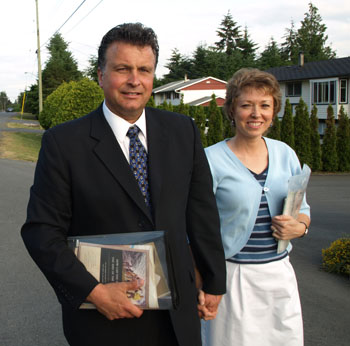 So, not to long ago, on a Saturday afternoon while I was home alone, there was a knock at the door. I even had pants on, so I was at the door in a reasonable amount of time. As I opened the door the first thing I noticed was a man in a suit. Now, living in Utah has resulted with me opening my door to a number of door to door salesmen, or women, that always travel in pairs. And I’m always willing to debate, hypothesize, philosophize, or banter about the finer points of selling gods and/or defining personal opinion and belief as universal truth.

Yeah, it always ends with people agreeing to disagree, and really does nothing to help evolve anyone opinions on the matter, but at least it’s entertaining, and the salespeople get a chance to get out of the weather and sit down for a while to talk and enjoy a beverage.

So you can imagine my initial joy at the prospect of one of these pointless entertaining conversations when I first opened the door. Turns out this chap had a lady standing next to him, which is nice because it automatically lets you know which Christian club house these people are from. Then, as I began to open my door to invite these people in, I noticed something that stopped me mid swing and made me swallow down the “Won’t you come in.” sentence I was about to say. 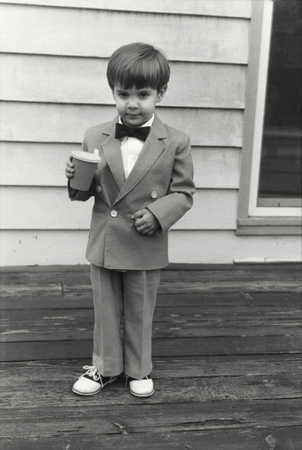 It was their kid, a little three or four year old boy standing next to their parents. I pointed at the kid, and almost said, “Hey! That’s cheating.” Instead I paused for a minute, and poorly covered up what I wanted to say with, “Oh, um, well done? I mean congratulations.” The Jehovah’s Witness parents looked at each other and then back at me and the husband offered a half confused thanks.

Damn, nothing but awkward small talk at this point. I was about to say something else, but that little person staring up at me kept throwing off my game. The husband took the lead during this lull in conversation and handed me a flyer, inviting me to an event their church was having next week.

I wanted to tell them to either save it or if they needed to pass all those out before going home they could just put them all in my recycling and go home early and enjoy their afternoon, but again, there was that little kid. 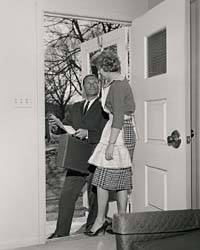 So as a public service announcement, to any door to door sellers, sharers, or preachers everywhere, please do not take your small children with you when you go door to door. It’s playing dirty is what it is. It greatly inhibits the conversation, and profanity professionals, such as myself, are left unable to practice their trade, well, to the full extent of their ability that is.

Have any of you experience this type of situation before? Did you go ahead and continue the conversation or did the little person with them trip you up too?